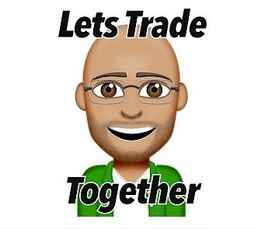 A bond is like an IOU given to you by a bank. When you lend the bank money, they’ll give you back that same amount at a later time along with a fixed amount of interest. For example, if you bought a two-year bond for $100 with a 2% annual return on it, you get $104.04 back after two years. Bonds have a number of benefits that justify the small rate of return. Government bonds are stable investments and bonds issued by the US government have never defaulted...YET.

The term yield curve refers to the relationship between the short- and long-term interest rates of fixed-income securities issued by the U.S. Treasury. Typically, short-term interest rates are lower than long-term rates reflecting higher yields for longer-term investments due to the higher risks associated with long dated maturities. Also, in a growing economy, investors demand higher yields at the long end of the curve to compensate for the opportunity cost of investing in bonds versus other asset classes.

As the economic cycle begins to slow, the upward slope of the yield curve tends to flatten as short-term rates increase and longer yields stay stable or decline slightly. As concerns of an impending recession increase, investors tend to buy long Treasury bonds as a safe harbor from falling equities markets. As more and more investors begin to buy long-term bonds, the Federal Reserve lowers the yield rates. Since investors aren’t buying a lot of short-term U.S. Treasury bonds, the Fed will make those yields higher to attract them. Eventually, the yield on short-term bills rises higher than the yield on long-term bonds, and the yield curve inverts. 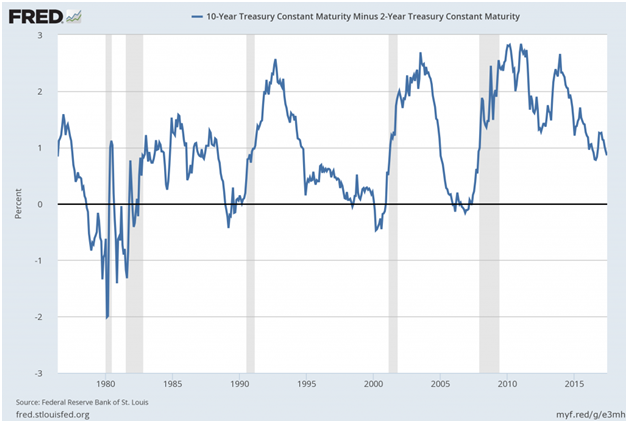 The most recent inverted yield curve first appeared in August 2006, as the Fed raised short-term interest rates in response to overheating equity, real estate and mortgage markets. The inversion of the yield curve preceded the peak of the S& P 500 in October 2007 by 14 months and the official start of the recession in December 2007 by 16 months, eventually leading to the Great Recession in which the S&P 500 dropped 50%. This next inversion is upon us right now. Based on history, I'm predicting the yield curve will invert by the end of the year, the Markets will peak in 2019 and we will be in a recession in 2020 (a period of temporary economic decline during which trade and industrial activity are reduced, generally identified by a fall in GDP in two successive quarters). 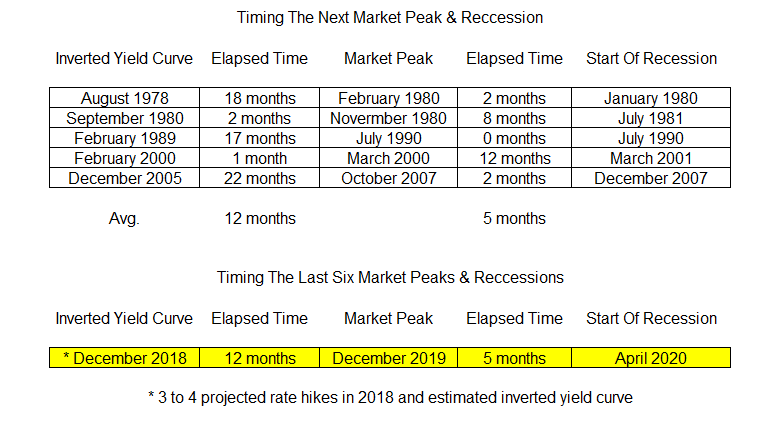 However, this time around balance sheets of the Fed and Treasury extremely over leveraged right from the start. Our national debt over $20 trillion dollars and the Fed's balance sheet at $4.5 trillion. Thus, when the yield curve inverts for the third time this century, you can expect unprecedented chaos in markets and the economy to follow shortly after because the yield curve will not only invert at a much lower starting point than at any other time in history. This represents a huge opportunity for those that can identify these inflection points and know where to invest. Be sure I will be here to tell you those opportunities and how to protect your capital.

What's the safest andmost profitable way to play it?

Check out this post I did 1 wk ago, it explains my overall game plan.

Essentially, I will be buying SPY leap put options and inverse ETFs.

I also started scaling in and shorting the AUDJPY forex pair...a position trade I will be in over the next 3-4 years, looking for a > 1000% profit. Look out for a post that explains the details in 2-3 wks.

I will also write a post that explains my go-to analysis for timing the tops and when to put on those puts / inverse ETF trades in the coming weeks as well.

Thank you for your post. :) I have voted for you: 🎁! To call me just write @contentvoter in a comment.

That yield curve is flattening as we speak. I like your analysis, I'm a bit more aggressive in that I would not be surprised if the January highs were the high were the next couple years.

Ideally, I hope we can get one more big push, poke through the Jan highs and then I'll get short on any reversal I see.

I agree with you Bro...you should enjoy this other post I did last month on the yield of the 10 yr bond.

I have also been posting why I think we have reached a tops as well, but I have to listen to what the charts are telling me and right now I'm not seeing any evidence that the Markets want to take out the highs in Jan. at this point.