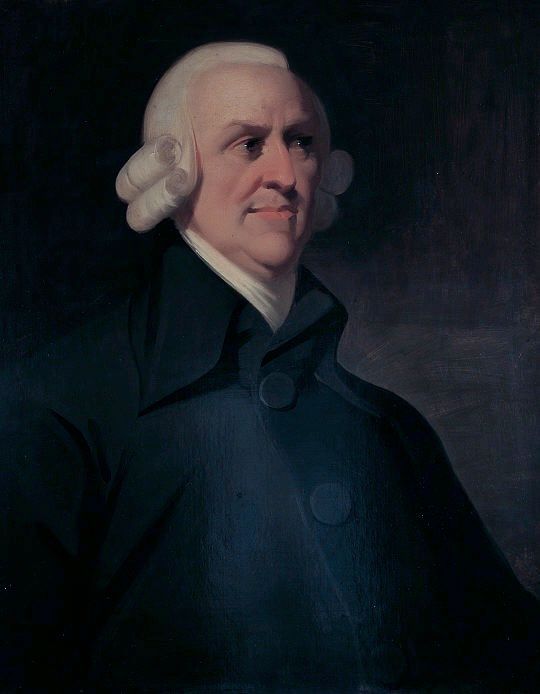 In 1759 Adam Smith published his Theory of Moral Sentiments in which he wrote that the education of children is the responsibility of parents... Lest they become indoctrinated by the State- how prophetic!

This, of course, didn't stop social engineers such as John Dewey from devising a system of public education with that very end in mind. I've written several posts critical of public education (which will likely continue). This is not to say that the teachers themselves are bad and I don't mean to paint them all with the same broad brush. There are some very dedicated, intelligent educators who, for the most part, are hampered in their efforts to educate by administrators. As in every other occupation there are some very good teachers and some very bad ones... But it isn't the teachers that run the school system, it's the administration.

The concept of public education as a means of actually educating children is doomed from the outset... It just doesn't pass logical muster. It is however, a useful tool for social engineers attempting to create and maintain behavioral uniformity- Dewey himself was a psychologist, a behaviorist. The very notion of putting anywhere from 20-50, if not more, children in a room with an unfamiliar adult and expecting them to learn is ridiculous on the face of it... It makes no sense whatsoever.

The US Dept. of Education decides educational policy. The bureaucrats that run it come primarily from the teacher's union (NEA)... one of the most powerful lobbying groups in the country as well as the largest contributor to the Democratic Party (if you're a teacher, that's where your dues go- like it or not). The NEA in fact controls educational policy in the US (as well as teacher voting habits). Any teacher who speaks their mind, or expresses opinions contrary to the NEA orthodoxy is immediately censured.

It was disclosed that at an NEA conference in the 1990's that no mention whatever of education even came up as a topic of discussion... Only how to create "good global citizens" in compliance with the UN's Treaty on the Rights of the Child (See link below for source). I sent my children to school to receive an education, not UN indoctrination- I prefer they learn to think for themselves... It looks like Adam Smith may have been on to something. But that wasn't what finally convinced me to homeschool.

I suggested that this was probably something better suited for a competent medical professional, not someone that barely graduated college- this was not one of the dedicated, intelligent teachers I spoke of earlier (I had spoken to her before and she definitely didn't strike me as the sharpest tack in the box). She told me I was "agitated" and "threatening" (oh, "offensive" as well). She threatened to call security.

I was sitting calmly and had made no threatening gestures or comments, only that I thought a doctor or at least the school nurse may be better suited (not to mention qualified) to make the diagnosis. I told her security wasn't necessary, that I was leaving- and so were my children. I went immediately and pulled my boys out of class. My oldest daughter was in kindergarten so I let her finish out the year... She liked the teacher and was having fun and I had taught her to read a couple of years earlier, so I didn't figure they could do much harm. One day when we walked to the school to pick her up we ran into my youngest son's former teacher, who pulled me aside:

"You did the right thing," she said. "I don't have kids, but if I did I wouldn't let them near this place." She went on to tell me: "I've been trying to get my sister to do what you did... You really did a good thing for your kids."

The Right Choice: The Incredible Failure of Public Education and the Rising Hope of Home Schooling : an Academic, Historical, Practical, and Legal Perspective... Christopher J. Klicka

It's true the education system is flawed in its current form where I live (in Australia). However, it is improving as the years go by. My school recently did a whole curriculum review to emphasise creativity, individualism and leadership, amongst other qualities. But the majority of school are sticking to the traditional ways of teaching which stifles innovation and growth in children.

Your example of the teacher diagnosing your child perfectly exemplifies the "if you don't do what we say, you'd doing it wrong" mentality. It is irresponsible, offensive and probably illegal for that teacher to have done that.

Thanks for posting and all the best with your children!
Education is the key to a successful future.
Have a nice day

education is really necessary 😍 those great lines The Incredible Failure of Public Education and the Rising Hope of Home Schooling : an Academic, Historical, Practical, and Legal Perspective..

Homeschooling is a very good thing! If my mom asked me about that 19 years ago i would say that i want to stay home)

In my state it is actually illegal for a teacher to say they even think your child has ADHD. I happen to know that from research I did while I was in college that it was illegal and went off on my son's teacher because she suggest I have my autistic son put on ADHD medications, he doesn't have ADHD he is has Asperger's and Dysgraphia.
I put his teacher in her place and told her if she ever suggested anything like that again I would sue the school and win. Because she was ignorant on the law and put it in writing. Then I looked at her and told her maybe she needed to education herself on Asperger's and Dsygraphia and actually educate him in the way he learned.

It wasn't long after that, I had enough and pulled him and both his sister's out and started home schooling them. Oh and just so you know in most places it is illegal for a teacher to give a diagnosis because they are not doctors and are not qualified to give a diagnosis.

They call teacher's diagnosing "practicing without a license" or something like that, don't they?

That is what it is call in my state.

My son didn't have anything... His teacher sucked and he was bored. You made the right decision homeschooling. If you need any reinforcement look into the book I posted in the link- you'll never send your kids near a public school again.

My son is my youngest he just entered his senior year. It was the best thing I did for my kids. My oldest has her own family and owns her home out right. My middle child is at Purdue University studying to be a Chemist. I don't know what my son will end up doing, he is still trying to figure it out himself but he has been given the skills to be successful and he has a love for learning like his sisters

I think that's pretty much the case for all homeschooled kids... My oldest boy has a marketing company (I couldn't begin to explain what he does) My second son builds golf resorts. My oldest daughter is a pharmacist and my youngest is a stay at home mom.

Thanks for this excellent post! Re-steemed I believe the united states education system has been going down hill since its mandate to public education (national curriculum) from its original individual community based system. We used to have community schools that the community it's self decided what was to be taught and the teacher was paid by the community.
Home schooled children have been scoring higher then public education in national tests. That has to say something for public education! It sucks!

They also seem to be more involved civically, thus dispelling the myth of social isolation

Wow, what a story you got there. Unfortunately, so many teachers are incapable of captivating the children's interest and would much rather deal with kids dumbed down by drugs...Maybe it's not necessarily the teachers' fault - they too have a boring curriculum to go through and tests, always tests, but you cannot honestly expect children to sit for hours listening to teachers droning...that's unnatural.

I wrote a post yesterday about my homeschooling pedagogy... I couldn't agree more!

Yes, I've just read it. I also believe in reading. I've loved reading all my life and I've always bought my kids whatever books they wanted. I might refuse buying a toy or candy, but never books. My own approach is letting them read what they want until they find their way to the what really interests them.

Can a responsible, smart and caring adult parent outwit school system? Sure, hands down. Unfortunately there are only 10% of such people. Without schooling, the world would be in chaos in my opinion. As a teacher I rarely to never have problems with kids, parents are the difficult ones.

Advertised you in my last beer tasting post. I hope it gets you more clicks! Cheers!

Like I said... it's not most of the teachers that are the problem... It's the union and the administration.

A couple of thoughts on homeschooling.

The ones I have met tend to have less ability to mix with their peers.

Here, often, both parents are required to work to make a living, if one parent had to stay home and teach that would half the income and reduce the standard of living the parents want for their children.

While some parents are well educated [by the same system they are now decrying] a lot aren't, if the almost illiterate teach the next generation what will they be like? I don't see many "Greats" coming out of that type system.

f you don't like the system change it, vote, elect, manoeuvre to get what you want, don't walk away, fix it.