You possess great powers, insane strength and good things will happen, all because of you.

I understand that this might sound a bit "cheesy" or ridiculous to some of you. However, no matter how it might sound, it's a true fact and I will share why & how these things affected me, my results and my Steemit journey.

Today, I will show you the opposite!

To show you everything, in as much details as possible, I need to share some screenshots with you. These screenshots are from my own account and I will show you my recent results.. - And what you've all managed to do. With or without "power".

First of all, I'll show you the amount of followers I had 3 days ago and how many I have today. 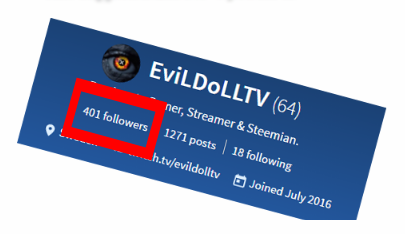 The next one I'll show you is from 2 days ago..

And this one is from today:

And why is that important?

The next thing I will show is the results I usually have on my posts.. As you can see, "no matter how much I try" or "whatever I do", the results are usually pretty similar. I've obviously had better results too, but this ain't about the "hiccups". This is about the average daily results I get.

I'm spending hours after hours writing and I don't reach anything even close to superb results on the posts I publish. - Do you agree?

If you view this post of mine: The Jaw-dropping Truth & Some Real Shit About My Steemit Journey. - Boy, was I wrong! - That's the one with the highest numbers of upvote from the screenshot above. - You'll see this:

That basically means that I've had 3 people reading (or at least viewing) my post, and decided not to vote. Up or down.

As usual, I reached my average results.. - And then, suddenly, something happened.

@ausbitbank, decided to Resteem not only one, but two of my posts!

You can find both posts he decided to Upvote & Resteem here:

Thank you once again ausbitbank!

And here's the results of one man's action.

And what should we call that...?

Note:
During the time I'm writing this, "libert" just reblogged this again!

Steemit can change people's lives far beyond monetary reward. We are for the most part a community that cares. I have been following you for a long time and I care. I wish you every success. What Steemit has taught me is the success of one does not take away from the success of another.

Thank you for your kindness @onetree, I appreciate it. I do agree with you, in every aspect. Sure, it might feel discouraging now and then, to see the same people on the trending pages with huge potential rewards, but the truth is, that even if they reach such huge rewards, others can still reach them too. Even at the same time. - And there's nothing that says that you can't become one of those people in the future!

Well said, @onetree
I wish for everybody success in every area if their lives!

Great post!!! I keep trying to tell people that there's power in numbers... if we keep upvoting and resteeming each other's content things will get better and grow. Every time you resteem it increases somebody's readership and then their followers will go up as well. I know it's impossible to resteem everything but I usually pick 5-6 good posts from other little guys and do it!

That's a great way of doing things for the so-called "nobodies". - It can and most likely will end up giving them greater results at the end of the day. - That's what I'd call a good deed. - To do something for another one, so everyone benefits from it. - Thanks for your comment! :)

Your deserve another resteem :) really good post for everybody. Nice to meet you

Thank you very much, I appreciate your kindness! :)

I like it. Shows what an influencer, or in this world dolphin/whale, can do when they genuinely share and spread their time and efforts.

One thing I've wondered, how come sometimes the upvote number is really high but the eyeball number is low. How is that possible?

Thank you! - Yeah it sure does. You don't even have to be a whale or a dolphin to achieve great things. In numbers, everyone can do amazing things.

Regarding the "eyeball number" and number of votes:
You can vote without actually reading the content you vote on. Which is one of the reasons for these numbers to be different from each other.

@hitmeasap
This is a wonderful community with many caring people! We learn and grow together! :)

After all, Steemit is so much more than just posts, comments and upvotes. - Steemit is a way of living.

I'm right there with ya! Agreed!

Great insight mate. If one's writing quality content then definitely sooner or later their skill will get recognition. Keep up the good work!

You nailed it! - The best part is, that you don't have to be a professional writer. You improve your skills with time too! :)

steemit is a life changer.... take it or leave it that the truth

It sure can be a life changer. Ultimately, it's up to each and everyone to approach it in the best possible way they can. - Steemit gives you the opportunity. All it takes, is for you to take the chance.

It was my pleasure. Thanks for reading it :)

Well deserved, and another mentor is born! Thank you!

Wow, the second person who calls me a mentor. - Thank you very much, I'm truly honored. :)

"By the power of Steemit!"

You're welcome, I'm glad you liked it :)

Add a new entry daily to the draw 😜

Nailed it again so upvoting and resteeming again. At this point I consider your a mentor. :) Thanks again!!

Even though I wouldn't consider myself a mentor, I do whatever I can to help others, and I try to help them by using my own perspective, knowledge and experience, instead of feeding people with crap that doesn't work. - Thank you once again! :)

This is practical advice. Thanks.

Steemit is a perfect example of- for better or worse- it's not what you know but instead WHO you know. I'm often shocked at the complete lack of traction and reward I receive on well thought posts but then a post that I thought was maybe so so gets lots of traction and high rewards- the difference? A whale or at least a dolphin upvoting or even resteeming. O'm grateful for the handful of whales/dolphins I have that view my stuff- if it not for them I would have put a lot less into this platform than I have.

That's correct. Sometimes you get lucky and other times you don't. However, even though it's a grinding process, eventually someone will notice you. That boosts all kinds of rewards. Followers and upvotes obviously and with some luck, it will even attract whales and dolphins. That could mean that your next post will reach great results due to all the things you earned previously.

Haha, I'd love to have my "ausbitbank moment".
Followed for this post!

Thank you, I appreciate it! :)

And yeah, you know the best part? - You will. It might take time but eventually, someone will pick it up and you'll benefit from that moment. :)

resteem and upvote for you