The Blue People of Kentucky: A 150-Year Mystery Finally Solved

The King of Pop has one of his pop hit music released in 1991 as Black or White. It was a song about racism where Michael mentioned that he cared less if the baby is either black or white.

Well, the post is not about racism, just to show universally human's complexion is either a shade of black or black and a shade of white or white. But ever heard of the people who are blue in appearance? And no I am not talking about the 2009 James Cameron's massively successful epic science movie, Avatar. That was just a movie and not real. Hollywood did what they know how best to do: they entertained us with stories. Sometimes real, other times made up.

In 1820 a French orphan who goes by the name of Martin Fugate migrated and took up residence in Kentucky at the Troublesome Creek. He had a medical mystery which was a secret to the outside world for more than a century.

Some of the descendants of the Fugate family inherited a rare trait: the blue skin. It remained a medical mystery for more than 150 years.

The human blood is red due to the protein called haemoglobin. At its molecular level its known as a heme which comprises of metal (iron molecules) which aid in the transportation of oxygen around the body. This iron characteristically reflects red due to the interaction that occurs between the iron and the way it binds oxygen.

The oxygen-rich blood's haemoglobin leaving the lungs is bright red, as the blood flows through the body, this red darkens after the oxygen is released into the body.

The rare blue skin was a result of the genetic disorder known as the methemoglobinemia.

Methemoglobinemia is when the high levels of methemoglobin are present in the blood. Methemoglobin is a form of the oxygen-carrying composite of the blood, haemoglobin.

The genetic disorder impairs the oxygen-carrying/releasing capability of the haemoglobin.

If you have like 1% or less of this abnormal haemoglobin (methemoglobin) the effect is not noticeable. But if you like the Fugates and your blood makeup contain between 10 to 20% of that methemoglobin, your skin will turn blue. But if the levels exceed 20%, the result could very likely be fatal.

How did the Fugates Get it?

It's a road problem.

The genetic disorder of methemoglobinemia is a recessive gene disorder much like the sickle cell anaemia disease, cystic fibrosis, etc.

It becomes a problem when two person of the same gene intermarries.

According to Dennis Stacy, a relative of the Fugate family.

When they settled this country back then, there was no roads. It was hard to get out, so they intermarried. The Blues

The road development only started around 1912, and it took a further 40 years to get to the Creeks.

Before then, the Fugates married their first cousins and close neighbours such as the Smiths, Combses, Ritchies and Stacys.

His family had seven children with more than half (4) of them blue.

In the 1960s a local nurse, Ruth Pendergrass, noticed this rare blue skin phenomenon while working at a hospital when one of the Fugates went for medical attention. She informed a haematologist working at the University of Kentucky, Dr Madision Cawein.

The good doctor treated the Fugate family members with a substance known as methlene blue. Though currently not a recommended form of treatment, it was a form of treatment then. For people with high amount of methemoglobin, the medication converts the ferric iron (Fe3+) to ferrous iron (Fe2+).

Ferric iron (Fe3+) is in a higher oxidised state and hence cannot bind oxygen and lend itself to the functions of haemoglobin.

The blood in its normal operation has the iron in the haemoglobin kept at its ferrous state (Fe2+).

If it becomes oxidised and gets into the ferric state, it then loses the oxygen-carrying function and is called the methemoglobin. In most healthy people, 2% of their haemoglobin is in this state.

The body usually takes care of this by the inherent enzyme which converts it back to ferric and the oxyhemoglobin will be rearing to go once more.

According to Dr Cawein, who later traced the cause of the odd phenomenon to methemoglobinemia disorder, his research shows that the kids born from the result of the relationship between recessive gene partners will inherit two genes (each parent contributes one).

The probability of the child being blue turns out to be 25%. 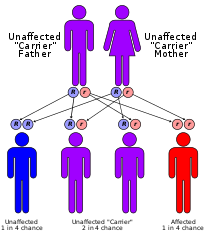 [image by Cburnett,CC-BY-SA-3.0] from: Wikipedia Commons]

Another doctor found an enzyme, diaphorase that converts methemoglobin back to haemoglobin is missing in the blood of the blue-skin families.

The Fugates family moved out of their secluded community cut off by inaccessible roads when coal mining started in Troublesome Creek in 1912; so did the blue people scatter and thin out.

The last known descendant of the Fugate blue family was the one born in 1975, Benjamin Stacy. He blue colour started to fade few weeks after birth and only becomes noticeable when he is cold. He is now a water plant supervisor after a management degree at Eastern Kentucky University.

Great post man. Your explanation of methaeglobinaemia is precise

We try to be as accurate as possible. Thank you for you taking out time to check on my post.

Wow... It's the first time I will hear that some people are or were blue in complexion. If anyone asked me if I know about the blue people of Kentucky I will actually take him as a joker.

This was quite informative. Kudos!

Well, it only happens once in a blue moon. Lol. I was surprised too when I read about it.

Now I know why in marriages in Africa, especially in West Africa, the elders will first check if the lady you are getting married to is related. If they found out the couple are related, even by a long distance, marriage is immediately stopped. As a kid I've always wondered that is so. But later I got to know more that it is for the couple's benefit.

The elders do know a lot of things. How they got to know there are consequences as far back as they did beats me. It's an honor to have you here. Thank you for visiting my blog.

Interesting post. I had no idea that avatars( blue people) are for real. Lol
Deoxygenated blood is thought to be blue and so the color of veins. And maybe that's why deficiency of oxygen makes persons blue.
But that's new information for me that it could be genetic having high rates of this blood.

Yes, if someone is asphyxiating they usually get a purplish hue.

Very interesting. It must have been tough to bear such an unusual trait when dealing with other people...

Yeah, you will always stand out like a sore thumb. It's already odd being either of the shades of the two colours. Imagine the looks the off colour will garner.

Without exaggeration, I had to read portions of this post again, to be sure my lack of sleep isn't taking away my sanity yet, but you surely aided me along with that nice explanation, that I'm sure I couldn't have created in my hallucination. My biology teacher did her best to explain the negative effects of In-breeding, I guess this post can be used to hammer the point home in those kind if classes. Kudos

Oh yes, inbreeding is totally not acceptable as it brings some weird consequences.