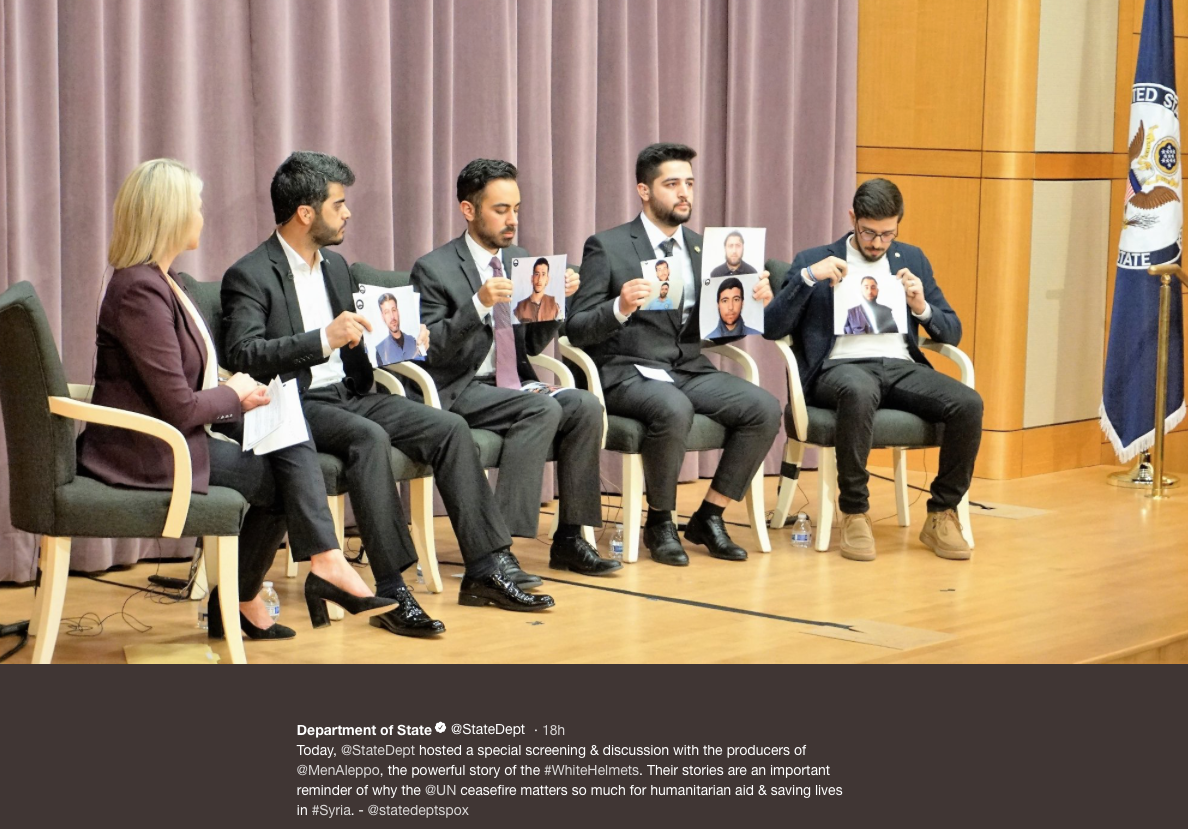 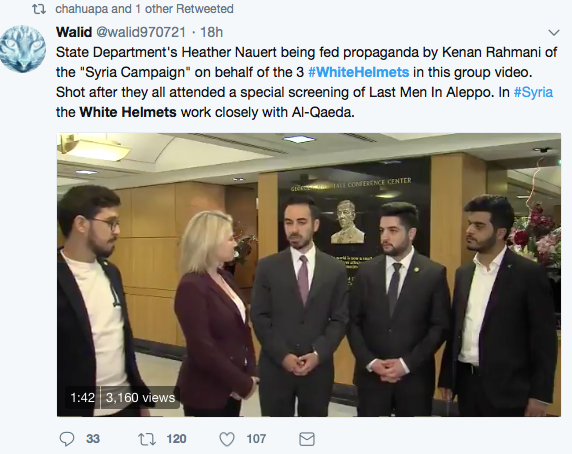 Link to Clarity of Signal post showing dozens of images screen captured from "Last Men in Aleppo" directors Facebook accounts proving they are terrorists linked with al-Nusra Front, al-Qaeda and ISIS, amongst other terror groups. Additional images from US State Department official meetings with Last Men in Aleppo: 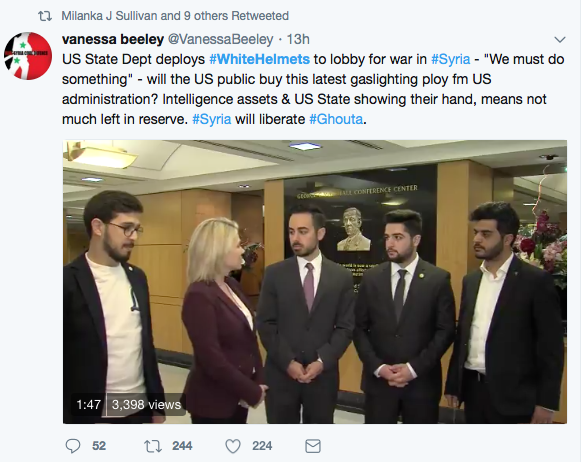 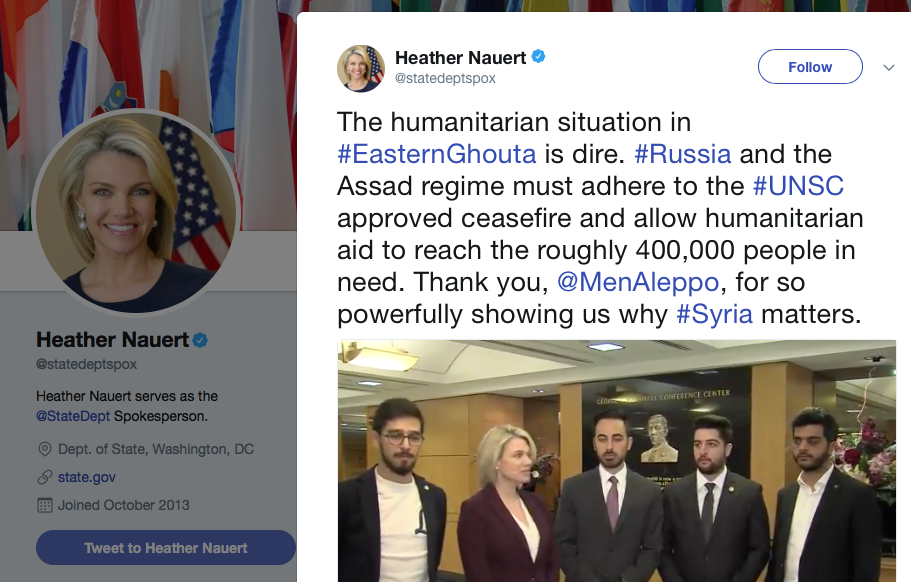 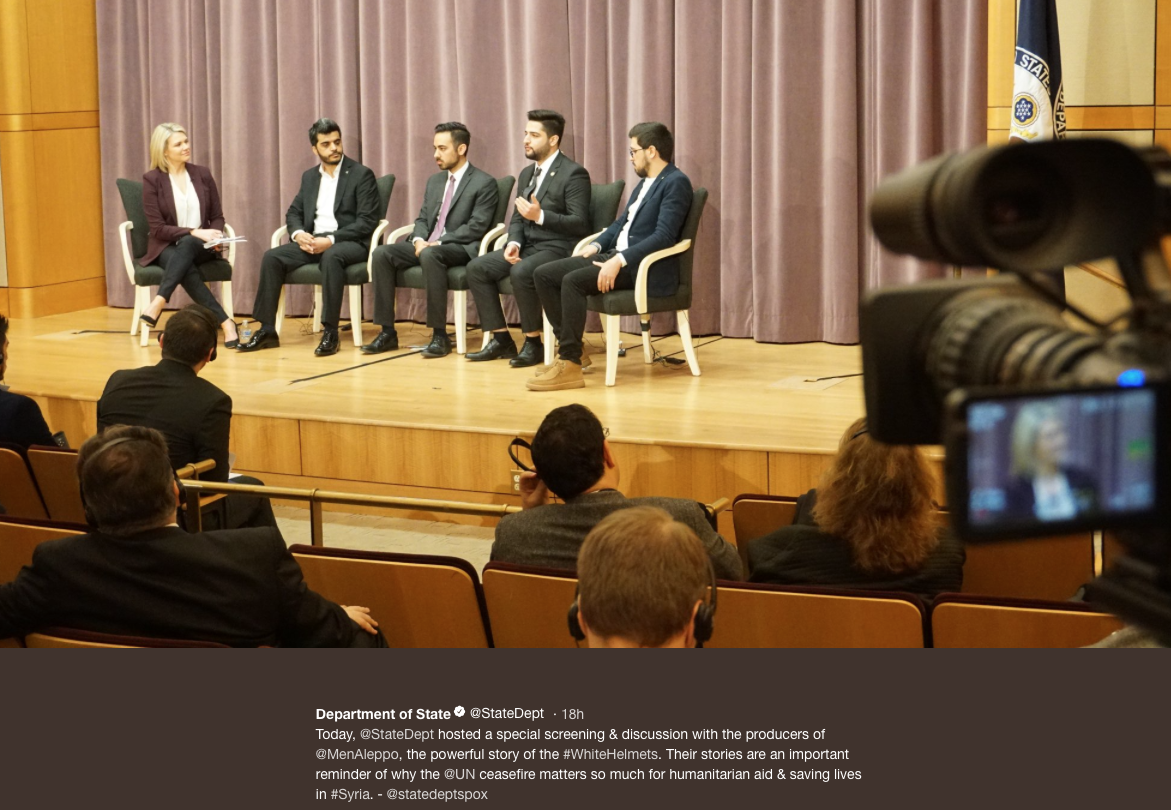 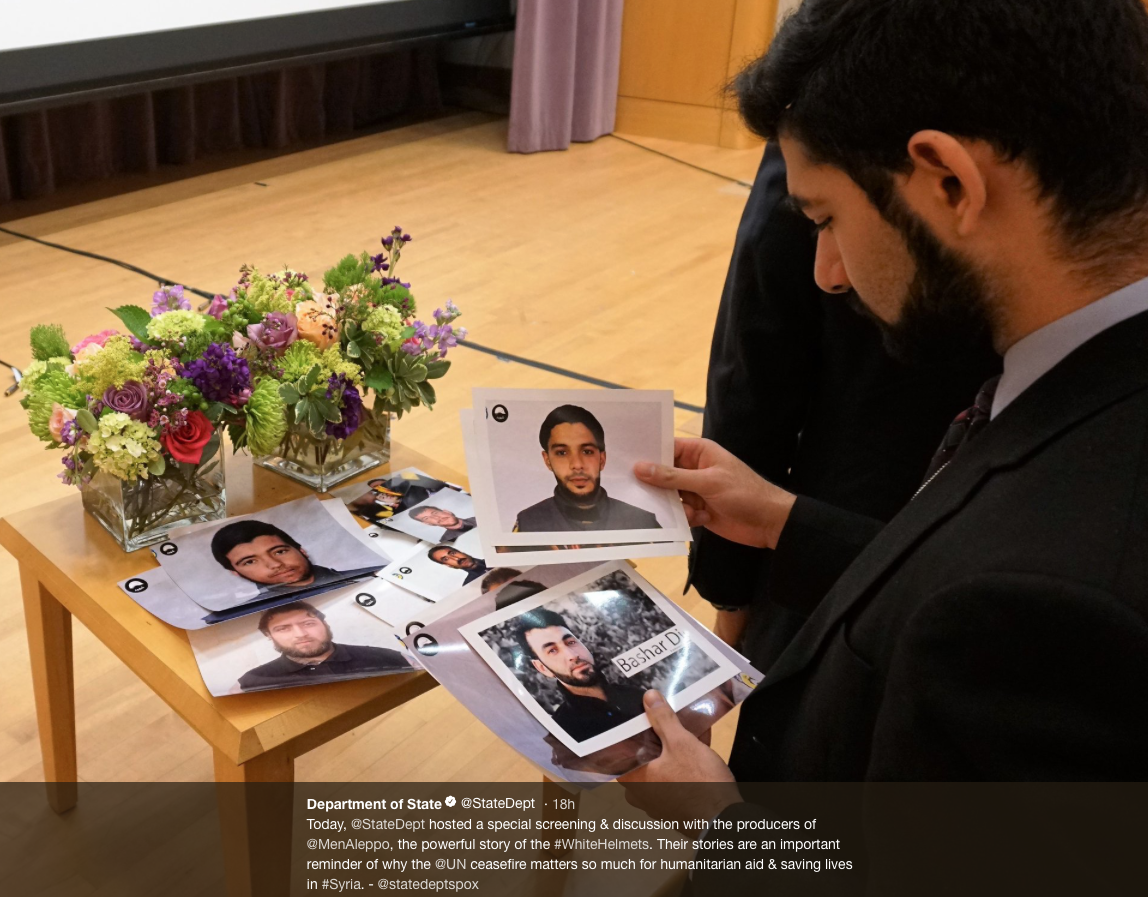 Now lets find out who US State Department spokesperson Heather Nauert is actually meeting with and reaping praise upon.... Alas, they are terrorists and terrorist affiliates and sympathizers, as proven by their own uploaded material and the research of dozens of geopolitical researchers and investigators of the White Helmets terrorist ruse the world over.

Kenan Rahmani, the leader of "The Syria Campiagn" has been filmed and photographed working alongside ISIS/al-Qaeda propaganda disseminator/terrorist Hadi Abadallah on numerous occasions. Hadi Abadallah has, in turn, been photographed on multiple occasions alongside the Saudi cleric leader of al-Nusra Front (al-Qaeda in Syria) Abdullah al-Muhaysini. Hadi Abadallah is also the lead propaganda disseminator of the White Helmets. They are all intertwined, along with ISIS, the White Helmets and other FSA terrorist groups killing Syria citizens. 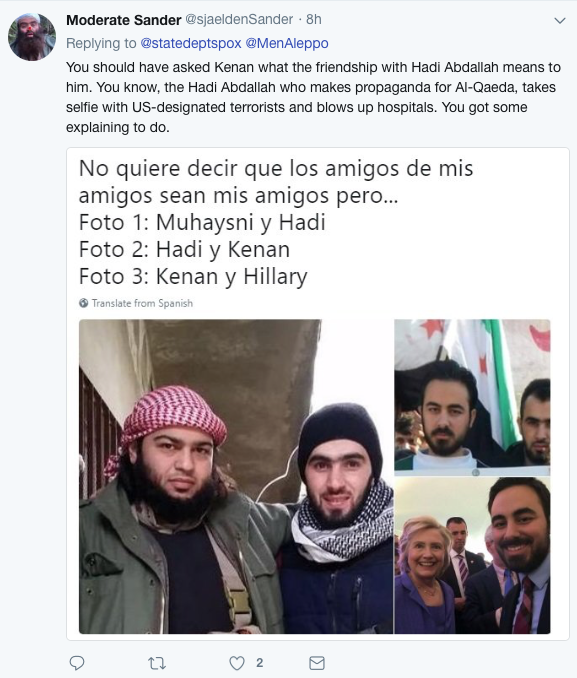 Photos at the above post link with terrorist and al-Nusra Front propaganda disseminator Hadi Abadallah who has been filmed on numerous occasions operating alongside US Treasury Department designated terrorist Saudi cleric Abdullah al-Muhaysini. 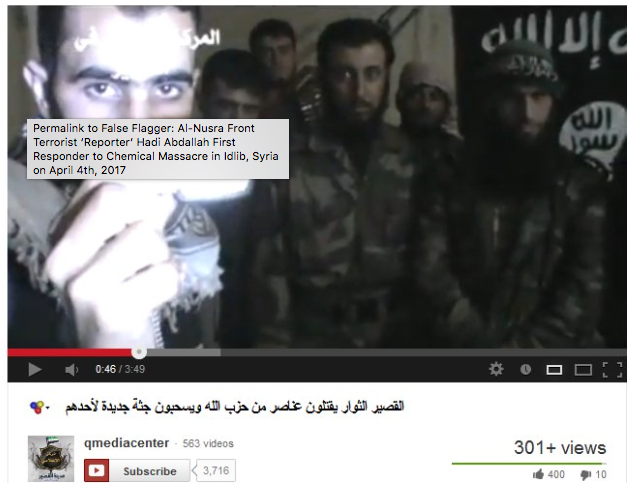 Hadi and The White Helmets – Hero’s by Day, Terrorists by Night. Paid for with US and UK taxpayer money. The al-Qaeda in Syria scam. Hadi Abadallah, the White Helmets PR man. 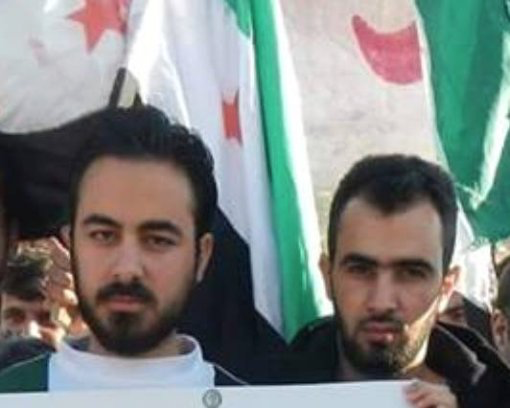 White Helmets and FSA are also linked with ISIS 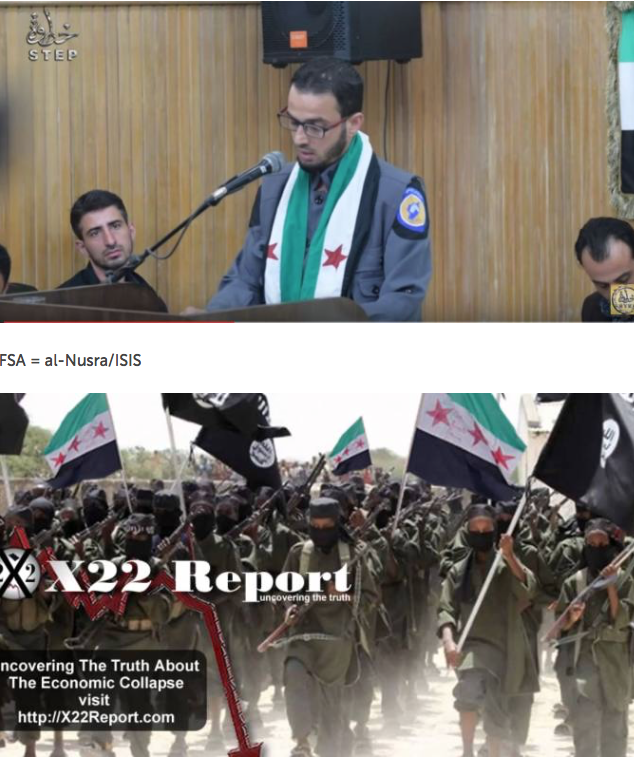 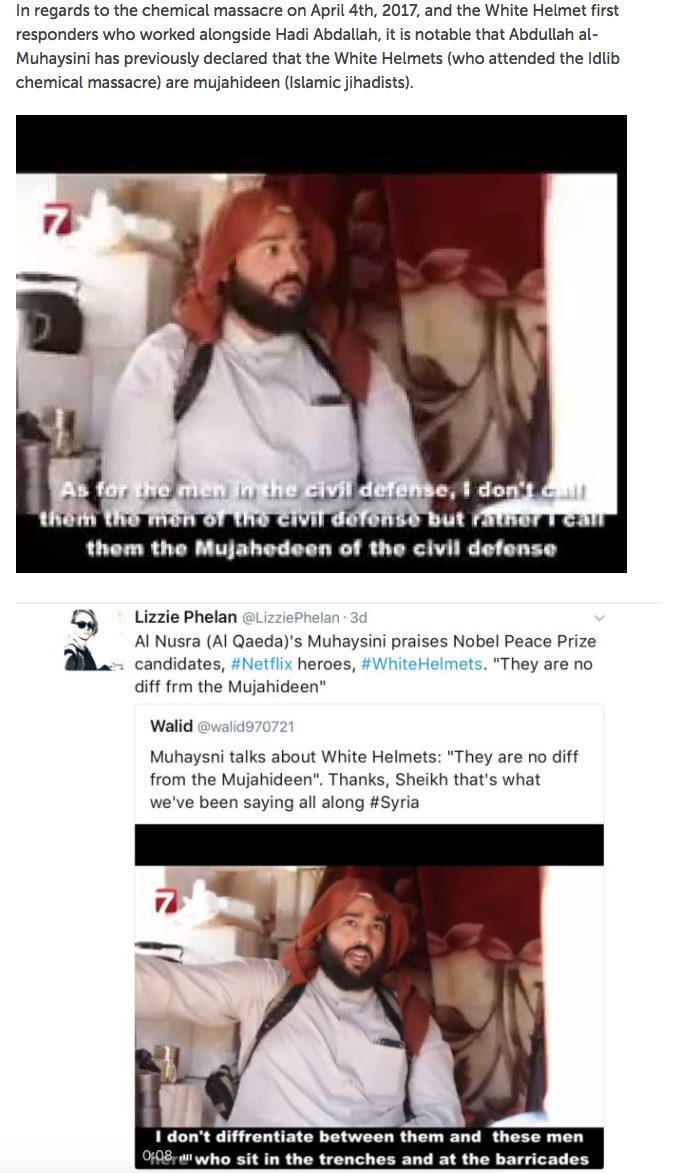 On November 10th, 2016, two days after Donald Trump was decided as President of the United States, the US Treasury Department, finally after 5 years of standing by and letting terrorists ruin over Syria, designated Abdullah al-Muhaysini as the leader of al-Nusra Front (al-Qaeeda in Syria). Thus, US citizens should be very curious as to why now, in February 2018, US State Department spokesperson Heather Nauert is standing side by side smiling and congratulating the "The Last Men in Aleppo" and promoters of the White Helmets who are praised on camera by the Saudi cleric terrorist leader of al-Qaeda in Syria Abdullah al-Muhaysini.

WASHINGTON – The U.S. Department of the Treasury’s Office of Foreign Assets Control (OFAC) took action today to disrupt al-Nusrah Front’s military, recruitment, and financing operations. Specifically, OFAC designated four key al-Nusrah Front leaders – Abdallah Muhammad Bin-Sulayman al-Muhaysini, Jamal Husayn Zayniyah, Abdul Jashari, and Ashraf Ahmad Fari al-Allak – pursuant to Executive Order (E.O.) 13224, which targets terrorists and those providing support to terrorists or acts of terrorism. As a result of today’s action, all property and interests in property of these designated individuals subject to U.S. jurisdiction are blocked, and U.S. persons are generally prohibited from engaging in transactions with them.

These designations were taken in coordination with the U.S. Department of State, which today named Jabhat Fath al Sham as an alias of al-Nusrah Front – al-Qa’ida’s affiliate in Syria.

Abdallah Muhammad Bin-Sulayman al-Muhaysini was designated for acting for or on behalf of, and providing support and services to or in support of, al-Nusrah Front.

Al-Muhaysini has played a crucial role in providing financial aid to al-Nusrah Front. Between 2013 and 2015, al-Muhaysini raised millions of dollars to support al-Nusrah Front governance efforts in Idlib Province, Syria. As of early October 2015, al-Muhaysini had set up institutions providing financial aid to terrorist groups, including a highly successful campaign that he claimed had secured $5 million in donations to arm fighters.

Link to video shows Saudi cleric leader of al-Nusra Front (al-Qaeda in Syria) giving a speech in which he states that ISIS and his Mujahideen should join forces. Thus, they are all linked. The White Helmets and western and Gulf state media support for these terrorist groups posing as rescuers of children are fully revealed in the following one hour long informative video:

Now for some truth about what is actually going on in East Ghouta Syria:

The concise report from Rania Khalek was very helpful. Thanks for all you are doing to expose the propaganda intended to conceal imperial covert terrorist assaults on innocent civilians.

Excellent research. Thank you for posting this.

Your article reflects the truth of what is currently going on between Trump and Russia, Heather Nauert is a stooge and setting Trump up to fail, he's being played to the 9th degree, great article.