The Psychology of Living a Life in a Bubble

440 397 212 views. This is the statistics under the YouTube video of one of the most popular pop hits for 2017 - the song Chained To The Rhythm by Katie Perry. In it the characters live in Oblivia amusement park, in their own "bubble", away from difficulties and misfortunes. They dance with pink glasses in a ironic "idyll". Katie Perry sing about living in a bubble- one of the most interesting and discussed global themes, which relates to closing down with a similar world in a narrow world of similar values, opportunities, tastes, and even political views. The phrase is not new at all, but we began to hear it often at the end of last year after the election victory of Donald Trump - a shock not only for the liberal Americans but also for many journalists whose judgments were completely wrong. Trump's campaign has made the most of social networking, and seems to fulfill the prophecies of the 2011 The Bubble Book of Elai Parriser. In general, a "bubble" has become a concept used in many areas and laden with many meanings, the common being that it always relates to a problem. What do we call bubble?

Professionals clinging to their work as their only identity. Their relationships with others are based on professional interests or hobbies, for which there is very little free time left. Fixed to their homes with the big debts they need to work for all their lives. But this is probably the whole white middle class in America. In sociology, the term reference groups of the individual have long been used - friendly, professional, interest, political, etc., which each person to some extent selects and in which they feel free, "on the ground". The way we look at data from sociological studies, for example, illustrates the "collision" of the individual with this multitude of worlds. In reviews under such articles or in life talks, many people respond to the pattern of "where did sociologists see these people listening to this music, no one listens to it from my friends?" How did those people who enjoy their work ask about me, no one is satisfied; etc. These reactions are nothing more than a verbal translation of cultural shock from the collision of the individual's own world with the anonymous majority of "the rest" that the individual doesn’t see, or with which their paths do not intersect. The expression "living in a balloon" describes the metaphorical distancing from what we can call the mass world. It has two dimensions - both internally and externally. The inside characterizes the subject who retired in the balloon. It can be a single individual, a small group or a larger social community that builds its own rules, norms, lifestyle. The external dimension describes the distance from larger social communities. Life in a balloon can be just a distancing, but it can be isolation, and in its ultimate form - hostility to the rest of the world. The balloon is a natural state of affairs. Few people are easily jumping from one group to another. The limitless ease of communication is a myth. Balloon we call the intolerance, snobbery and herb instinct. It's hard to avoid, because it's a security mechanism, a security system.

How technology heals the balloon

The elections in the United States gave rise to another balloon: the filter. One of the first to analyze the so- filter bubbles, is the political activist, co-founder of MoveOn.org and creator of the Upworthy Ily Pariser website for "meaningful" virus content. In 2011, in his book The Filter Bubble: What Internet is Hiding From You, he makes a connection with the algorithms on Facebook, Google, Amazon, Netflix, etc. that sifted search results and news by measure for each user according to his profile, creating separate "customized" content bubbles - "parallel but divided universes," the personalization algorithms create a social division that prevents the existence of a truly informed audience. Besides, the convenience of a flow of information that in no way provokes us and offers us the same as our version of things suppresses the impulse to reflection and creativity. The bubble thus formed is a problem for democracy because it prevents people from receiving neutral background information that they have the opportunity to analyze and comment on. It restricts it because it provides us information filtered out of our own views and interests without a variety of points of view. Currently, traditional media is much more important to most Americans than social networks. "The most affected by the effect of the bubble are the most devoted Facebook users, for whom the network is a major source, and it’s a curious and intricate fact that most journalists are such, and that is a problem. Marc Zuckerberg himself at the Tehonomy conference at Half Moon Bay, just the day after Trump's victory, denies the theory that Facebook has somehow influenced the election as crazy. In the same conversation, he also says he doesn’t believe in the filter bubble, and that in-depth research shows that everyone has friends from another party or other religion. Different content exists, one just passes by when he sees it, says Zuckerberg. 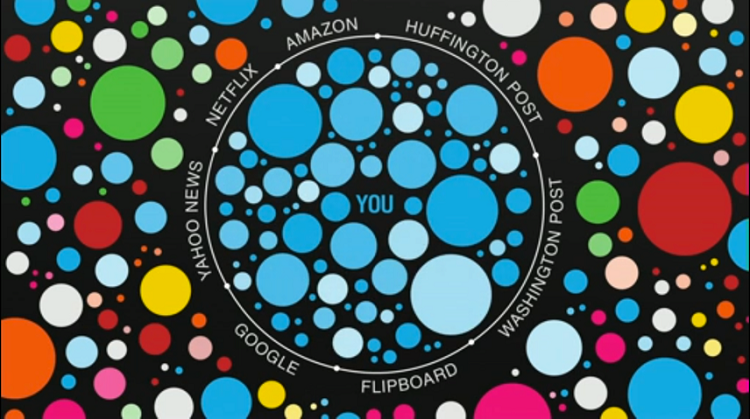 The problem of credibility

While some authors like Erin Griffin argue on the basis of previous political examples that Facebook can completely regulate its algorithms, others such as Dana Boyd, Microsoft researcher and founder of Data & Society, deny such a one-sided statement . According to her, the problems are the vague definition of false news and the constant evolution of abusive methods. According to Boyd, the discussion of fake news is still wrongly focused on the technological solution to the problem: if companies such as Facebook and Google are forced to do something, everything will come in place. If we see technology companies as the sole culprit, then we do not notice the cultural problem that is at the root and we overwhelm our own responsibility, "said Boyd. In 2016, The Guardian is making an experiment - creating new Facebook profiles for 10 voters at both ends of the political spectrum, giving the Liberals a "conservative" profile and vice versa. The participants from both camps agree that the news "on the other side" is false and "brainwashes", and one part directly recognizes hate directed towards them.

Social media and algorithms facilitate the partitioning and closing of different groups in consumer or value balloons. On the basis of our closed communication, we have decided that the whole society is similar to what we see in our bubble. The problem is that offline slowly we lose a whole palette of emotions that make us human and help us co-operate to survive as humans. Instead, we have Facebook today, where emotions are expressed - safe and without the heavy tax of communication. If you don’t like the status - you are being beaten. The online bubble is not a cause but a symptom of the problems. If you're in a real-life bubble, you'll be in a bubble and in the virtual. And as we know, changes in real life are making difficult, especially conscious changes. Getting organic or going for a year in South America will not take you out of the bubble. Online we are simply transferring traditional phenomena to communicating live. The reality is ballooning and, according to the writer and libertarian Charles Murray, who is developing a test for Americans in 2012 (included in his book Coming Apart) to show if they live in a balloon. Subsequently, PBS NewsHour uses questions in an online poll that receives hundreds of thousands of responses. The test causes respondents to think about their attitude to poverty, lack of education, life in a small town, and even Avon products. It helps one realize how easy it is, even inevitable, to get into a balloon - this is determined by the value system, the religious and political views, the standard of living, the tastes, the choice of places to visit, the friends of similar interests. The point is that the more back in history we come back, the more homogeneous the societies and the more "similar" the individuals of a social class. Modernization and globalization, supported by the Internet and Facebook, have led to an unknown level of social differentiation, an explosion of small communities, an opportunity to participate in numerous groups of ever-increasing interests. This process is a double. On the one hand, one has a greater chance of finding people like him to be in a group, a boat or a balloon On the other hand, the complication of the world, the professions, the life styles, the life biographies leads to an increasing a sense of difference, a misunderstanding, a mismatch with a large part of the world surrounding the individual. That is why, in recent years, this or similar expressions have been increasingly used, each of which describes a different degree of differentiation - lives in one's own world, lives in a balloon, lives in a soap bubble. Balloons in thinking are also due to a psychological response to the complicated world we live in. Complicated - because we have access to all sorts of inexhaustible information amid ever more fragmented and poor education. The differences between cultures and countries, the diversity we see on the internet is so unimaginable that it looks like we are scary. So we close our shells and balloons with the fear of others. Aggression rises. Psychologists say that when we look at each other, aggression is considerably smaller, "she explains." At the same time, more and more physical space is privatized from our urban environment. There are fewer places (parks, gardens, public areas) where, without consuming, we can meet other people different from us - to have real physical access. Not accidentally, the struggle for parks (both in America and in Europe) in recent years has become one of the strongest political trusts for social mobilization.

There is another erosion of "human". The tendency is to become less dependent on other people around us and their "services". Why load up with unnecessary emotions and keep in touch with a neighbor who can be very different from us and not like it now that we can now buy the service he has ever provided. What in the past was accessible only through the physical help of others around us - for example, someone can help you repair your stove, car, someone else looking at your child, relationships worked through empathy, mutual support or "barter" today are being bought as a service. You just have money. There is no need to immerse ourselves in human relationships and emotions that accompany communication. Facebook balloons move away from other balloons and we lose not only our perception of the society as a whole but also the receptors of empathy and inequality.

You mobilize your brain capacity))