The four types of introversion and the differences between them 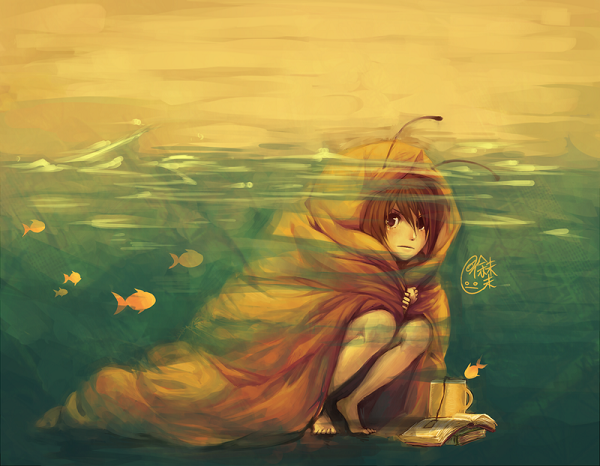 Our culture values only the extroverts. We discourage the inner journey, the search for the center. That's how we lost it and we need to find it again. Extroverts and introvertness are concepts of Hans Eisenk's concept of personality. They are popularized by Carl Gustav Jung who says that our views will become clear when we look at our own heart's. Whoever looks out, dreams. Whoever looks inward - wakes up. The introverts are silent, restrained, rethink their actions, and are relatively less involved in social ties. In the event of a conflict or critical situation, they tend to look for reasons within themselves and often analyze their own actions and actions. It can not, however, and should not be a sign of equality between introversion and insanity.
When it comes to introvertness, we often imagine a pity of people: silent and introspective, shy, irresponsible, but with depth and originality of thought. But introvertness is a little more complicated than that. It is a temperament that manifests itself in character in many different ways depending on the context of the individual personality and environment.

Susan Kane describes introverts as they have very strong social skills and enjoy parties and business meetings, but they are very soon to be at home with pajamas. They prefer to give their energy to close friends, colleagues and family. They listen more than they talk, think before they open their mouths and express themselves better in writing than in a conversation. They do not like the conflicts. They are afraid of mediocre conversations, but they enjoy deep discussions. Wellington College psychologist Jonathan Chick identifies four types of introversion: social, thinking, worrying and restrained. And although each of these four types tends to focus primarily on their inner world, each one has a unique set of traits that interact differently with the world.

They prefer to interact with other people in small groups. They avoid mobs and do not see much sense in attending noisy parties or talking to strangers. However, they are not shy. In fact, they really enjoy interacting with others, but in four eyes. Their antipathy towards large groups is based on their system of personal self-esteem and is not motivated by anxiety or uncertainty. Social introverts enjoy more serenity than other people and need a lot of time alone to re-energize and find harmony with the world. The thinking introverts are more complex to identify. Because they do not share the antipathy toward social events so characteristic of other types of introvert. However, they are deeply intrigued because of their propensity for introspection, self-analysis and profound thinking. This type of introverters are unusually creative and prone to fantasy and all kinds of imagination games. These are the artists, the dreamers and the freethinking spirits in our world.

They are the only species that is characterized by a real dislike of social interaction. Due to the increased attention of their consciousness and their ability to look inward, they are much more restrictive in the company of others than most of us. This type of introverters are perfectionists. Their brains work intensely, making them prone to overconsideration and constant doubt in themselves. Although they are highly intelligent and very sensitive to the emotions of others, they encounter extremely strong problems in interacting with other people.

They can be described as reserved and targeted. They are the opposite of impulsive extroverts and never forget to think before speaking or taking action. This way of thinking makes them move at a slower pace, but rarely in the wrong direction. They are the most attentive in the category of introverts, and also the most cautious. It is difficult for such a person to try new things or to commit serious commitments. But they do it, it's usually for life.

Bill Gates, the founder of Microsoft, the philanthropist, the richest man on the planet, and the introvert, once asked how he succeeds in a world of extroverts, shares the following:

"Well, I think introverts can do quite well. If you're clever, you can learn to get the benefits of being an introvert, which might be, say, being willing to go off for a few days and think about a tough problem, read everything you can, push yourself very hard to think out on the edge of that area. Then, if you come up with something, if you want to hire people, get them excited, build a company around that idea, you better learn what extroverts do, you better hire some extroverts, like Steve Ballmer I would claim as an extrovert, and tap into both sets of skills in order to have a company that thrives both as in deep thinking and building teams and going out into the world to sell those ideas."

Very interestingly written, @godflesh. Your posts are always very thought provoking and reflective :) . I am a fan of Carl Jung - "Show me a sane man and I will cure him " :D .
I identify with the "thinking introvert" . I am not apprehensive of people. In fact , professionally I deal with 20 -30 people daily. But I draw a definite line ! I like my space :) . And yes, I respect free thought ! :)

Thank you. Yes, I know you are "thinking introvert", it is very visible, hehe :) Of course, we have each type in a bit, but some dominate.I am more identify with the "anxious introverts" :D And Carl Jung is like idol to me :)

Enjoyed this post, Godflesh. I might be a mix between a social introvert and a thinking introvert. I enjoy interacting with small groups of people, but need time alone to recuperate :)

Sometimes society "treats badly", everything and those who are not common, nor base their actions on the fashions or "stable criteria" of the masses or utilitarian for the system; In terms of introverts, they do not seem bad or good to me, they are just "different". Being intelligent, helps a lot introverted and being introverted helps a lot intelligent, because one of its fundamental weapons would be its high capacity to abstract from its environment and focus on "...". Otherwise, by not being intelligent and introverted, it also involves a blessing, being able to devote more time to thoughtful analysis to solve problems and compensate for their poor mental capacity.

Interesting post. I definitely identify, but with parts of each!

Jung makes the point that environment can force an introvert to be extroverted. I had a large family so I feel as though I started out VERY into socializing, but the older I got (keep getting), the less I want to go there.
I may even have reached the point of being an anxious introvert...but I'm no perfectionist:/

I understand you,and i think about that thesis with the environment. There is truth in it but with me, when I am socialize, I'm more stressed and my situation is getting worse, hehe :)

Awesome yet again. Well written, informative, and interesting. To classify myself within these terms I'd say I major in Anxious Introversion with a minor in Thinking Introversion.

With me is the same , a major Anxious and a little bit thinkig :)