In Violence, there are several forms of recurrence by force, and we will identify this phenomenon in two aspects, the individual and the social in everyday life, in the family, in school as a component of social interactions. For example, prejudice and discrimination are expressions of social violence, group, and individual.

"Violence, however it manifests itself, is always a defeat." - Jean-Paul Sartre

Between violence and rationality, there is no incompatibility " - Foucault
In the question of Power, we will perceive its bases and structure, its effects and results in the network of the social dynamics, as a generator of violence, coercion, normalization, and conformism.
For these authors-Fiske, 1993; Keltner, Gruenfeld, & Anderson, 2003- social power "the ability of a person to create conformity even when the people being influenced can try to resist those changes."
Power is the interface of social control as the coercion of the dominant structure.

In the last posts of this series, we will approach the problem of the individual change in the attitudes and behaviors and of the social mutations, analyzing the relationship between minorities and majorities.
Change creates new norms built on resistance and conflict.
The growth of current violence demands a reflection on the conflicts of the current social fabric and the social and economic crisis of the contemporary world. 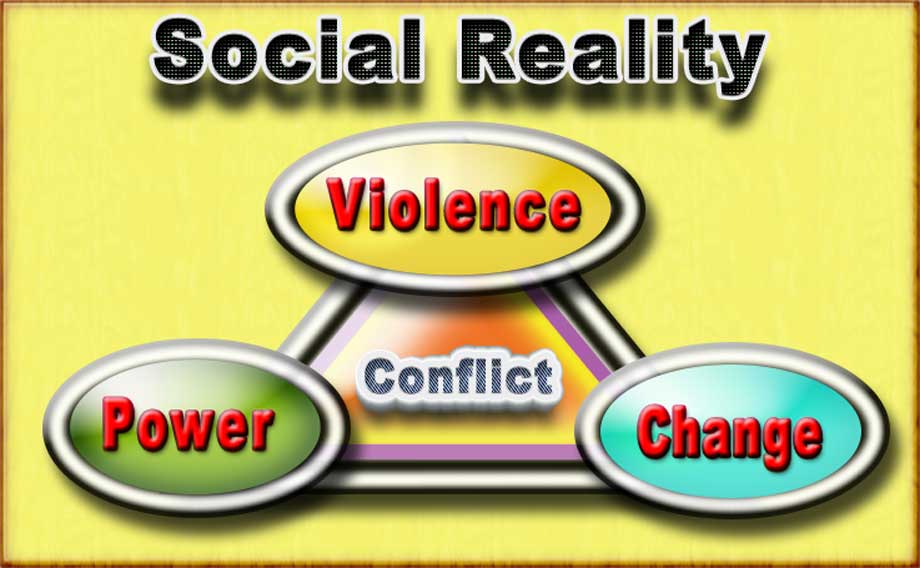 Leadership to date has always been approached in the relation to centralized structures, will be confronted with the new concept of decentralization that will end up with the figure of the classic leader who acts according to his navel and/or organizational goals that will be dethroned by the figure of the Agent of Change.
Agents of Change act with goals focused on the overall needs of each community and not on their own needs or external interests. In the future, each citizen will be an agent of change in the decentralized communities.

Social Reality as a conflict has a dynamic in the relationship of a Field of Forces (Kurt Levin) that is interdependent of its environment and individual behavior.
In its formula "Behavior = Person + Environment"
Dynamics is an imported conception of Physics for Social Psychology that characterizes a conflictive opposition in an environment of a force field generating individual behaviors.
In the Sociological perspective, this conflict can be seen in terms of social classes, in which a new emerging class opposes the classes that dominated it.

A "new emerging social class" will be that of young people who do not have access to work and owe money to the banks, who have paid for an obsolete education, which because it has become a mere business, has lost its Human Dimension and the notion of Reality.On the other hand, these young people from Western societies worldwide have unemployment rates of 50% or more, and few prospects of asserting themselves in life, since there is no place for them in the current centralized machine.
We will address the issue of multiculturalism, and of the change of culture in a globalizing society with transnational forms of corporate power subordinating national political powers.

The blockchain may be the gateway for this "new social class" to emerge, to assert itself and to defeat the ruling class of the aging population of the "Civilized Worlds" that no longer produce anything and let the economics of financial speculation prevail, and which alone deplete the GDP of these countries.
The next series of posts will be devoted exclusively to the social phenomenon of violence, approaching its concepts, theories, the factors that influence it, to end with an analysis of violence in today's society.

"If you are willing never to use violence, and always resisting, become strong in body and soul, it is the most difficult of all attitudes." - Agostinho da Silva

Every human being has an instinct as an agent of change for both self and external interests. The form of change is done to avoid the occurrence of the form of discriminalization or friction of social conflict in the community. the changes created by a leader can create excellent economic growth amidst the masyasakat regardless of the social strata.
Your article @ charlie777pt always makes us learn how we interact in real life.

Thanks a lot for your good comment.
Always having a maximum awareness of the environment that surrounds us, increases proportionately the physical life expectancy and exponentially the experience of the spirit.
Ignorance of the surrounding reality generates friction which is a concept of physics that associates the entropy of systems to their degeneracy by maladaptation and limits the time it can exist.

I'll surely have a look at your next articles!

Your quote by Agostinho da Silva rings very true to me. This made me instantly think of Martial Arts' ultimate goal of not using bodily violence at all.
'And always resisting' => It is truly a path to go once we realize that we assumed so much external conditioning that we even forgot that it is NOT ours. Only then we can begin getting ourselves out the pickle. As I walways say 'the only Truth lies within onself'. When we realize that, we'll always find our way.

Thank you for this introduction!