Nepal is geographically, culturally and socially diverse country. We can see diversity in the people living in different parts of this country. The climatic condition of the country is very different in the Himalayan region, mountain region and Terai region.

People living in these parts of the country have their own costumes, language, religion, lifestyle and culture. It is very difficult to find any village executive or municipality where people of only one caste or religion lives. The most beautiful feature of our country is unity in diversity. 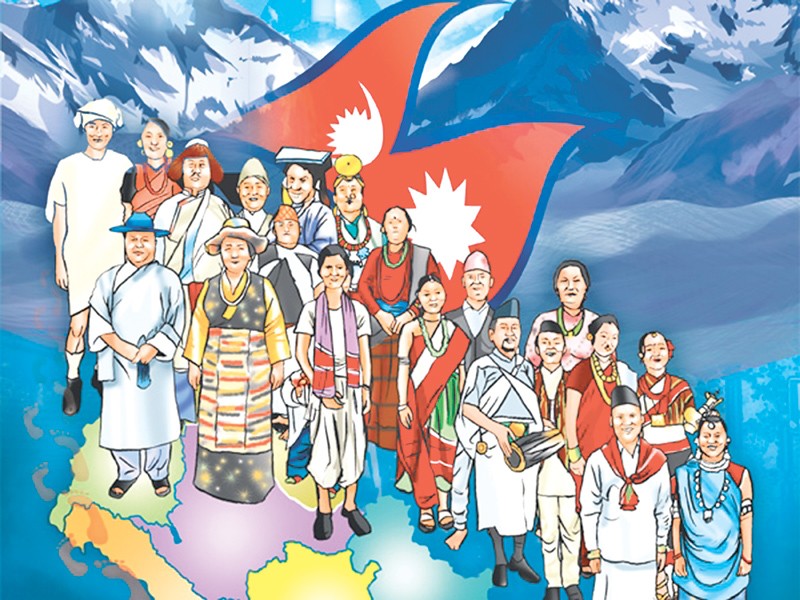 All three regions are interdependent on one another. The rivers flowing from the Himalayas reach the Terai that facilitates in the process of irrigation. This in turn helps in the agricultural production. The crops grown in the Terai region is transported and consumed by the people of the mountain and Himalayan region. It helps to run the factories and industries of Terai region.

We respect each other and live in harmony. This is the true spirit of social harmony that is embodied into each Nepali's mind. We have to create our own individuality and try to contribute as much as possible in the developmental work of our country. Our caste, religion, language can be different but united effort can push ys to development.

Nepal is a culturally rich country. There are various costumes, folk songs, music, dance, art and culture that belong to the people of different regions. People from Himalaya region to Terai region are not only different in their conducts but are also different in their physical and facial structure. They also speak different languages and follow different culture.

Nepal is similar to garden where different types of flowers are grown. The fragrance of these flowers enchants the whole garden making it beautiful and pleasant. In a similar manner the diversity of Nepalese people makes it a beautiful country where each community has something uniqye to gove back to the nation. This essence of Nepal makes its people feel proud and happy.

Thank you for your time!
@bindu

Thanks for sharing this wonderful article, i will like to visit nepal one day

Pleasure is all mine. You are heartily welcome!!

your post pleased me, I such not when did not hear.thank you that you presented this information us

a garden of four varnas (castes) and 36 sub-castes

Exactly! Proud to be NEPALI

Have yet to visit Nepal, been in India a couple of times and have had friends whom wandered in the himalayan mountains and around Nepal, everyone says it's a must do in life.

Otherwise, if you're into travelling, vlogs, fitness, self-development etc feel free to check out my channel, in any case keep up the good work and I'll see you around! :)

Thats a huge compliment for us. Thank you visiting my post. I am glad

@bindu As PNS said " Char jaat chhatish barna ko sajha fulbari". Religious harmony is key factor for a peaceful nation. Diversity is what makes us unique. Thanks for this great post.

Thank you for your kind words