The collapse of Carillion smacks of Lehman Brothers, Bear Sterns and the 2008 Financial Crisis all rolled into one. This is just the beginning..!!

Why the collapse of Carillion should be setting off alarm bells, not just in the U.K., but all around the World..!! 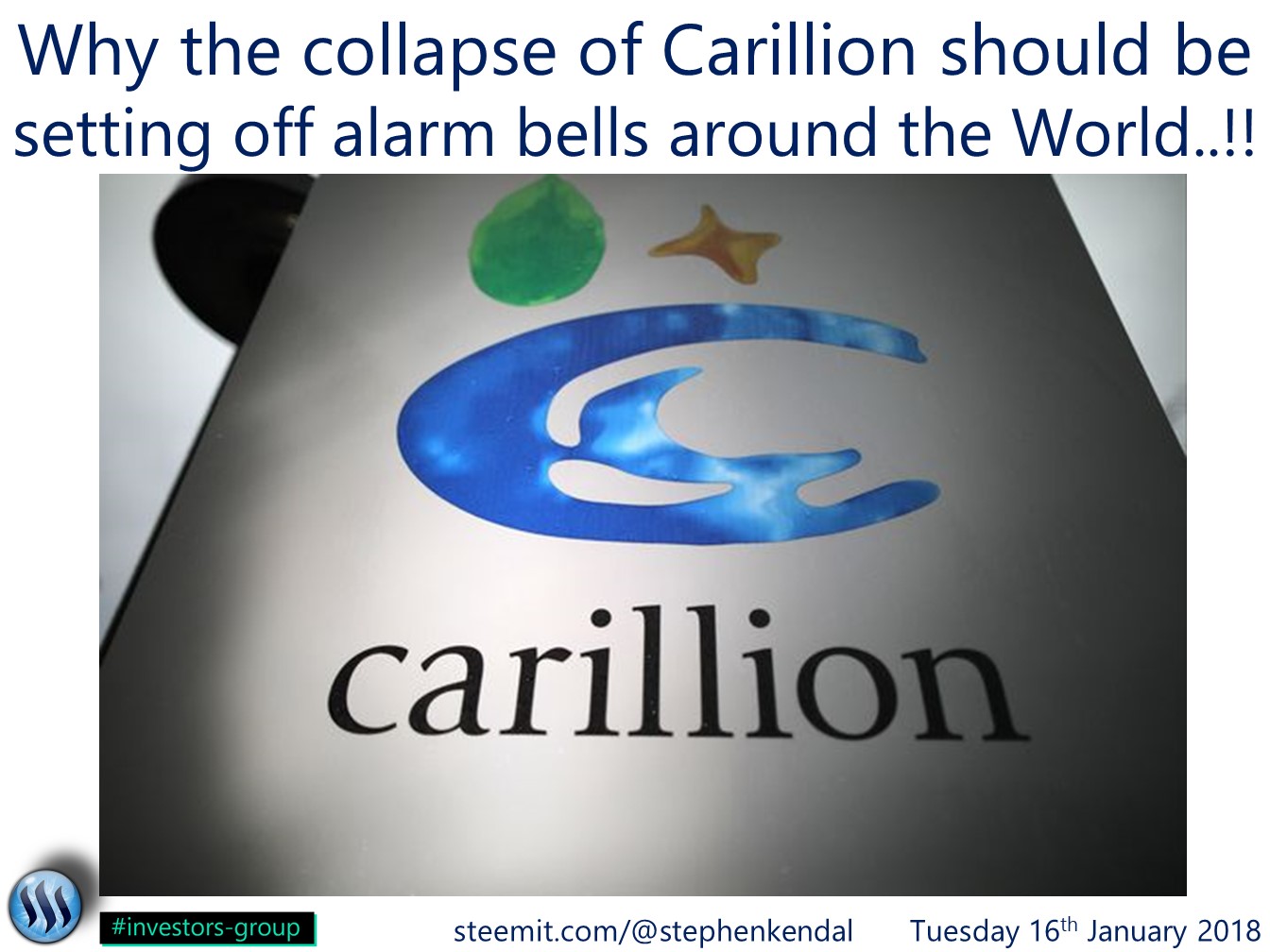 Collapse of Carillion should be setting off alarm bells..!!

Most of you who follow the financial news will be well aware of the recent collapse of Carillion in the U.K.

Yesterday morning Carillion went into receivership with debts that are currently being reported in excess of $1.4 billion and I have no doubts at all that this figure will be much higher as the contagion of their demise spreads through the supply chain.

For the ones unfamiliar with Carillion, they are a large Construction Company and Service Provider that has seen a rapid expansion of the last few years through acquisitions and takeovers.

Over +30 years experience in the Construction Industry

Regular readers who have followed me on #Steemit over the last 17 months will know that I have over +30 years experience in the Construction Industry, having focused most of my career in: Construction Finance, Construction Management, Contract Procurement, Cost Management and Data Systems.

With this +30 years experience in Construction Finance under my belt, it has helped me sniff out many problems, on many occasions before they occur, and with the recent collapse of Carillion, my sniffing senses tells me that this is just the beginning..!!

For anyone unfamiliar with Private Finance Initiatives (PFI) Projects, rather than trying to explain them in my own words, I thought it would be simply easy to share this with you.

I am very familiar with PFI Projects as I as was personally involved in creating them in the late 1990's / early 2000's when they were first introduced and I am fully aware of the risks associated with them.

In very basic terms, a PFI Project supposedly brings together the Public and Private Sector together in a Strategic Partnership and by doing so transfers Debt and Liability over to the Private Sector.

These PFI Projects are ok when when they work, but when they fail the consequences could be unimaginable simply by the mis-allocation of Debt.

Over the last 10 years since the 2008 Financial Crisis, debt has spiralled out of control, but it is not just the debt, it is the type of debt that should be setting off alarm bells.

Public Debt is one thing, but Private Debt is a whole different ball game and with the recent collapse of Carillion in a sea of Private Debt, this story is far from over.

Over the next few weeks I suspect that we are going to hear a lot more, a hell of a lot more, from the collapse of Carillion and I would not at all be surprised if we witness a domino effect not only through the Construction Industry, but across Banking, Finance, Manufacturing, Insurance and Service Sectors, to name just a few.

I have no doubts at all that the two factors that will take centre stage throughout the inquiry into the collapse of Carillion will be: Accountability and Transparency.

The ink is still wet on the Bankruptcy Papers and already it is common knowledge that the U.K. Government were well aware of the dire financial position of Carillion in the run up to their collapse, and yet continued to award huge Infrastructure and Service Contracts to them despite the continued alarm bells being rung.

It is this Accountability and Transparency that are the two issues that I am most particular interested in, as fits nicely into what I have been championing now for over 4 years, and that Administration of Central Government has to be lifted out of the archaic and antiquated systems used in the dark ages, onto the Decentralised Distributed Ledger Technology of the Blockchain.

This migration of Administration has to take place now, or we will simply be papering over the cracks knowing that nothing has really changed.

It is not just in the UK, but right the way across the Western World, that our: Roads, Bridges, Tunnels, Drains and Infrastructures are collapsing, and this is a MASSIVE PROBLEM.

For decades, the Private Sector has focused on quick Profit Margins for the benefit of the Shareholders with a total disregard to the future liabilities of our Infrastructure.

I am sorry to be the bearer of bad news, but with +30 years Construction experience under my belt, I have kind of earned the stripes to say that as far as the Infrastructure goes in the U.K. things are bad, they are REALLY, REALLY, REALLY, REALLY BAD..!!

The next time you drive around your Neighbourhood, Town, City or out in the Country, take a good look at the roads, bridges, tunnels and infrastructure, and tell me whether they are falling apart or not?

Please feel free to use the #Investors-Group tag for: Stocks, Cryptocurrencies, Commodities and Investment related Blogs.

@StephenKendal... Excellent Post AND excellent observations, in my humble opinion.

The world is more inter-connected than ever before...

Real Estate and practically every thing else is in a "Bubble" except Bitcoin.

The Real Harbinger to come will be the deterioration & collapse of the Bond Markets, Globally.

The USA Bond Market may be the Biggest Bubble on the entire planet and IF the USA Bond Market is about to begin its collapse, then we will see interest rates go from about 1% to much higher rates which will cause a domino effect...

BUT the REAL safety net in my humble opinion is not just Gold & Silver but Bitcoin, which may turn out to be the BEST "store of value" on the planet.

Hope You didn't mind, my giving my opinon as a semi-retired Investment Banker with almost 40 years of experience.

I read every single word of your reply and agree 100% with what you say. This is a great contribution to the Blog and I appreciate you replying. I hope everyone reads it. Thanks for sharing your thoughts with us. This is the sort of interaction/comment #Steemit was made for. Thanks again. Stephen

Precious metals are not but they are still effectively manipulated.

sounds like the 2018 canary in the coal mine for the global economy, and interesting timing! upvoted and resteemed

what is also an effect of Carillion is that Serco and KBR seem to benefit or can. Both companies do very bad business(if it can even be called that)in certain sectors(business) and countries.

The 2008 crisis is what I was thinking of too while seeing it. Scary to see it is just the beginning too.

The 2008 crisis is what I was thinking of too while seeing it. Scary to see it is just the beginning too.

If my sniffing senses are right and I am confident I am, people will wish it was 2008..!! Stephen

It's hard to say what snow flake ❄️ will cause the avalanche but right not it's not a question of if it's a question of when. Might be an excellent time to get some silver and gold

Might be an excellent time to get some silver and gold

Both Gold and Silver are the most manipulated and undervalued assets on the Planet. If I woke up tomorrow and Gold was trading at $27,000oz and Silver was at $700oz, I would simply roll over, go back to sleep and wouldn't be surprised in the slightest. This is how severely manipulated these markets are. Stephen

that would be more reasonable pricing for sure. In your own opinion what could break this manipulated market ? It seems they just dump billions of paper contracts on the market and slam the price whenever it tries to go higher.

When they control the market price with the click of a market can it change? Could a parallel market be what breaks the manipulation- such as the Chinese gold and silver market ? Would really value your experience and knowledge regarding this. I love gold and silver - but after seeing the price slammed over and over again it's easy to loose hope

If you haven't already see it, this is an interview I did with Max Keiser back in January 2016. My interview was in the second half. I explain exactly what is going to happen to the Gold and Silver Market. Well worth watching for those that haven't seen it. Stephen Awesome - Thanks a lot !

Dont you remember when Roosevelt took everyones Gold and only allowed 1 oz per person, in the US? Or was that Truman? Thats why I would rather have hooks and bullets.

One year he abolished the alcohol and gold was okay, the next year he banned gold and alcohol was fine - I don't know what's worse ? Hahah

Hooks and bullets. Fishing tackle and nets. You cant eat gold, but you can eat fish and shrimp, and know what plants you can eat. I remember there was an archealogical dig on a European castle that was under siege by Napoleon, I think, and the corpses found buried in the moats, still had the gold in their pockets, and they had written that during the brutal winter, under siege, that bread was worth 10 times it weight in gold. Might be a good idea to get a few big bags of rice, sugar, flour, lard, oil, salt, vinegar, baking soda. None of these items will go bad and can become valueable commodities during bad times.

VerY very true. Under the right or wrong circumstances you could buy bread using gold coins

Taxpayers should not bail out these failures, they have to be left to fall.

Taxpayers should not bail out these failures

Sadly they will..!! Stephen

Thank so much for writing a worth reading article. Many things and terms ate wuite new for me and i am Really convinced that you are an ocean of knowldge. +30 Years experience OMG!!

I am going to learn many new things from you, Although i am new addition to this great playform but i will surely contribute at my end to support & promote steemit.

Thanks once again for sharing this news

I will always bet Against the current system. Always!

Thanks for sharing your knowledge and research.