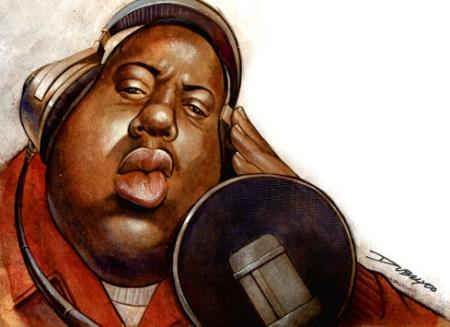 This song is about life in the hood. A guy owes a ton of dough on loan to a bank. He cops a rap sheet and goes to court. Now he owes the bank, the court and lawyers. He starts slinging drugs to pay off his debts. The people can't take the situation anymore. He says that if the police beat up anymore innocent people, then his neighborhood will get violent and, "shut it down." Black community and police relations are at a boiling point in this music video from 1991.

This song is a commentary on the outcome of the Rodney King police brutality case. Ice Cube goes in deep, using a wet t-shirt as a metaphor for someone who has been shot in the chest. Cube goes on to say that violent retribution for police brutality is justified and should be aimed at white supremacists and the officers who brutalize his black countrymen.

"Valley for the KKK, Rodney!
A place on the map where the order is
though devils can't leap up a motorist
and get nothin but a slap on the wrist"

Scarface is one of my favorite rappers because of his mastery of rhyme and imagery. In this song, "Jesse James" -- from the hardcore gangsta rap album, "The Diary" -- Scarface describes his assassination crime. It begins with him committing a murder in cold blood without any mercy or regret. Then he confronts random other people on the street, which ends in their murder. Scarface puts the listener in the mind of a indiscriminate murderer, showing that some people are just evil or cannot comprehend empathy.

This song is about a inmate's perspective on what it will take for him to achieve emotional atonement after coming to terms with the murder of of his friend, at his own hand. His take on the situation is that he must hold himself personally responsible for his crimes; with the recognition that black on black crime and mental slavery are the principle causes for the black community's crime epidemic. Furthermore, these issues of poisonous culture arise out of the social paradigm of a, "white man's world." it is claimed that the current American culture, which black people find themselves a second-class of, was never outfitted to acclimate black people. Nor did black folks have a hand in building it. This is the principle problem that creates a intra-cultural struggle in the black community. However, Makaveil shows hope for his people and pledges that someday black peoples will become the most successful race on the planet. He states that in the creation of their own cultural paradigm, blacks will flourish and end the cultural ills that currently plague their community. He theorizes that this new paradigm of black leadership can be achieved though mass awakening in the embrace of black power prophets such as, "Mutulu Shakur, Geronimo Pratt, Mumia Abu, Jamal Sekou Odinga, all the real OG's."

This song is about a pimp threatening his hoe with violence in order to receive his, "protection" money. Then he spends all her money in the club, gets on stage and rocks the house.

Huge fan of hiphop here. Although I like the music, I must say that inciting violence is dangerous. The anger is understandable, but to fight fire with fire doesn't make you any more humble in my opinion.
What's your take on this?

A universal principle of morality is defined in the Non-Aggression Principle as, "A rejection of the initiation of force." So this is where I am coming from.

In the opening of Tupac's album, The Don Killuminati (1996) Tupac says, "It's not about east or west, it's about niggas and bitches, power and money, riders and punks. Which side are you on?" I believe that this album and line might be one of the most critical compositions in Tupac's discography and to the genre of hip-hop.

What (((people))) don't get about Tupac and the early days of hip-hop is that almost all the genre was produced by black people. It wasn't until hip-hop became supremely commercially successful that the senseless violence and thug-shit became centerpiece to the genre. Yes, rappers talks about throwing down, killing and etc back in the day. However, listen to the black-produced records, and watch the black-produced movies -- violence for the sake of self-defense and the establishment of a black culture -- created for the betterment of black people -- was the message.

So what did Professor Griff, Tupac, Scarface, and Louis Farrakahn, mean when they ask, "Which side are you on?" They ask, are you willing to be a struggling black man who lives to benefit his community and kin? Or do you value the possessions of money, drugs, and women -- in exchange for your fame and reputation being used to promote an agenda? All of these free-thinkers listed above (and many more) have said, the entertainment business holds the agenda of propaganda as high as they do making money. So if an entertainer should come in to the industry, they will need to feed propaganda to their audience, in exchange for more money and fame. In that industry it is a fact that the celebrities that are chosen to rise to the top are tools of propaganda because entertainment leaders use the media as a means of control, take it to the bank.

Lastly, the rise of violent, sex crazed and basically degenerate rap music that has been the mainstream from the late 90's to present is an outgrowth of a degeneracy rising in American culture, propped up by individual entertainers willing to push a propaganda agenda in exchange for the pleasures of money, women and drugs.

Read the works of Marcus Garvey (cultural reasoning), Thomas Sowell (economic reasoning), and - most relevant to this post - Louis Farrakhan (spiritual reasoning.) They have laid out the exact causes for these problem. The bane of these philosopher's works are the modern, "entertainer" (Kardashian-era) sellouts. For more on the topic, check it out from the mouths of rappers, as to whom produces hip-hop, and why.