The Real Memes of Society

When most people hear the word 'meme,' their brain thinks about something like this: 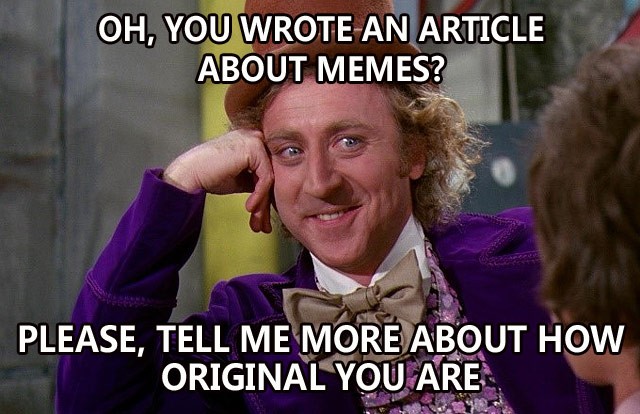 Internet memes are one of my favorite things about the internet. They are hilarious.

But the word 'meme' actually comes from Sociology. A meme is like the social equivalent of a gene. It is an idea, behavior or style that gets passed down and around in a society. All memes act as assumptions about how the world works. These memes are rarely described directly, you have to look at a larger context to even spot them.

The easiest way to 'get' what memes are is to look at some examples:

Those memes are pretty easy to see, though. Let’s look at one that has more emotional attachment for most people:

Example 3 - Jenny's boyfriend caught her cheating on him. Now he is probably going to break up with her

Memes themselves are not 'good,' 'bad,' 'right' or 'wrong.' They are simply underlying assumptions about the nature of reality, how we live, or how we should live. They are transmitted through media, conversation, gestures, rituals and really any form of way that people share information.

To see how memes are transmitted, let's take a look at example 3

Whether or not you believe in monogamy or not - let that go for a minute so you can see this. As humans grow up, there are subtle and not so subtle ways youth are taught to be monogamous.

Parents may say things like, "One day when you meet the right boy/girl..." - this has the assumption there is only one 'right' person out there for us. Cheating is a common theme in television and other media. Observing others feeling devastated after being cheating on teaches people how to react if it happens to them. Sometimes it is not subtle. In a religious household, children may be told, "If you cheat on your future spouse, you will go to hell."

Symbols are complex, have many layers of understanding and meaning, and vary from person to person. In our example, each of us has an internal symbol for the concept of monogamy. Think of your brain as a computer.

For some people, when they think about their monogamy.sym file, it conjures happy feelings of comfort and images of being with their soulmate. For others, who maybe grew up in a family that was split up because of infidelity or had someone cheat on them directly, their monogamy.sym file may be filled with emotions of anger, regret, and images of pain. That same internal symbol could also be filled with hope and images of finding the 'perfect' partner that does not cheat.

It is important to remember memes are underlying assumptions in society which influence our internal symbols and understanding of how the world works and 'should' work.