Steemit Basketball League is the best happening for me in Steemit

Steemit Basketball League has been one of the best thing that happen to me since i have joined Steemit Community. At first i am only active communicating people via discord, chat and talk with them online and not in personal.

I always seen some activeness of Steemit Community leaders around the Philippines promoting Steemit at the same time helping the community through giving food and goods to less fortunate people.

Some did organized some meetup, focusing on teaching the new comers how Steemit works and how you could earn from it. Organizers making sure that those who attend the meetup does fully understand.

As for me i watch almost all of those blogs everyday, reading and checking their developments and i am really amused and happy as i read them.

Things have changed when @josephace135 invite me on a basketball meetup. I did not missed this opportunity for that i could meet some Steemians and at the same time i could able to do some exercise through basketball. Me and my brother-in-law @nunilon take the opportunity to be present on the said meetup. 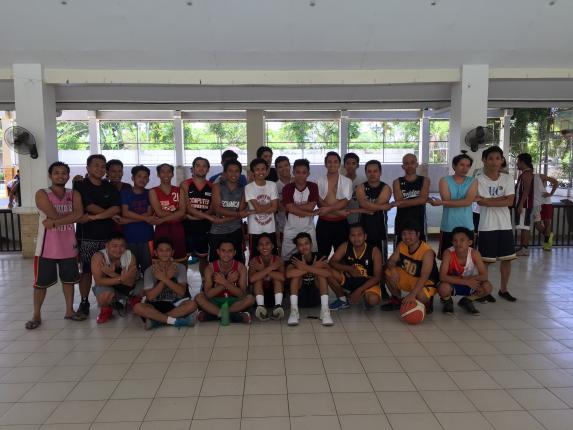 My first appearance of the meetup is really amazing. I did able to meet @jassennessaj , which we had some talks.

It was followed by succeeding Basketball Meetups, until we have decided to organized a league so we could promote Steemit into the community in a much wider way.

During some basketball league i did met following Steemians which i really closed into @reyarobo and @natz04 which the two of them are buddies and at the same time workmates. And last Sunday, we had our first Steemit League where all of the players end up exhausted and at the same time satisfied with the game matches because of the intense match up. It was really fun that we can't wait for the next Sunday to come so we could continue the Steemit League.

After the basketball matches, we then make a group picture. Looking forward this coming Sunday guys for the continuation of the basketball matches!

It was definitely fun to see you @robin-ho and exciting games ahead! :)

yeah.. i am looking forward to the next game day. =)

I am in Bataan visiting and trying to meet some Filipino Steemians, I just posted about it do you suppose you could resteem or tag a few that might go? Thanks and lets get the pi steemin