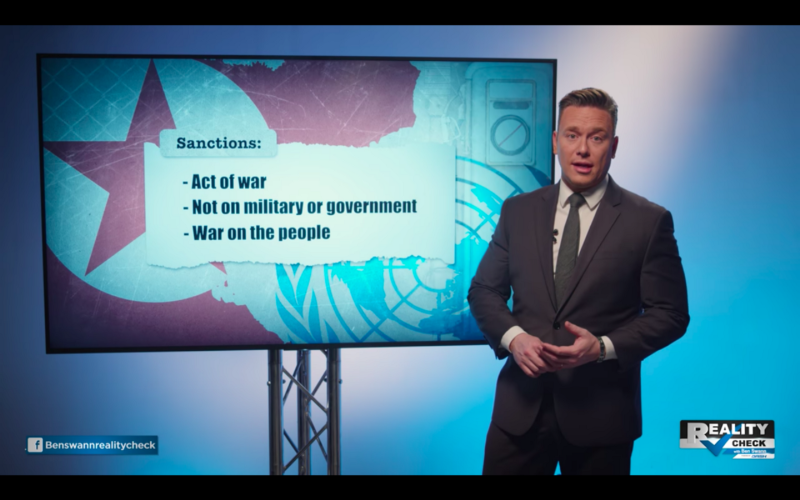 “The Russian envoy to North Korea warned President Trump not to place any further sanctions against North Korea or Kim Jong-un surrounding ‘supplies of oil’,” says a clean-cut reporter in a polished, professional newscast presentation. “To do so, he says, would be perceived as a declaration of war.”

Hmm, interesting. What am I watching? CNN?

“But if we’re going to be honest,” the reporter continues, “aren’t all sanctions an act of war? And why are we putting sanctions on North Korea in the first place?”

The report continues with information from reputable sources explaining the spurious and politically motivated basis for labeling North Korea as a “state sponsor of terrorism”, shows data documenting how ineffective sanctions actually are in achieving their purported goals, weaving together facts and figures which culminate in the conclusion that "all that those sanctions truly do is bruise and harm the people in that country who have no real control over whether there is a war or not."

The presentation is slick and concise enough to be indistinguishable from a professional mainstream media news broadcast, save for an abundance of information which would never be permitted on mainstream media. It's a phenomenal resource for anti-imperialists like myself to share around when news breaks as it did today that the Trump administration is stacking even more crushing sanctions upon North Korea.

Ben Swann is an award-winning journalist whose willingness to ask questions you aren't allowed to ask and share information you aren't supposed to share has made him a hero of alternative media and an enemy of establishment attack dogs everywhere. He famously disappeared about a year ago after doing a surprising Reality Check report about the Pizzagate controversy on a local CBS affiliate, then deleting his entire social media presence and promising to return. Swann’s social media blackout was reportedly a condition of his remaining employed at the station following the nationwide backlash against his report, but he has publicly said he will be filling us all in on exactly what went down in the near future.

In his famous Reality Check segments prior to his disappearance, Swann was one of the largest voices calling attention to the now-uncontroversial fact that the US-backed "freedom fighters" in Syria were actually violent jihadists. He called out the problems with the CIA Russia narrative, he defended Black Lives Matter protesters, WikiLeaks and third parties from establishment smears, and just generally threw a big fat monkey wrench in Big Brother's plans for us at every opportunity using facts and information.

Swann is guided by an unapologetic libertarian ideology which has proved capable of producing some of the most effective weapons against the establishment propaganda machine on the internet. His anti-imperialist, anti-drug war, anti-surveillance, pro-freedom perspective and high professional standards have already given rise to some phenomenal videos about the despicable things the US power establishment did to Haiti, the Orwellian implications of FISA surveillance legislation, and Jeff Sessions' idiotic marijuana agenda, as well as some quality articles on his site Truth in Media.

His ideology doesn't exactly match my own (hell, no one's perfect), but all in all I see Ben Swann's return as probably the most interesting thing happening on the alternative media scene right now in terms of the damage he can do to the Orwellian death machine. Pay attention to this guy, follow him on Twitter, Facebook and YouTube, and when you see him sharing something you like, throw it into the gears of the machine by circulating it far and wide. Thank you.

Just an fyi, Ben has been posting to Steemit and Dtube for just under a week now, pretty exciting!!
Might want to add that bit to your article;)

Really glad you're boosting good people out there busting shit up. I may not agree with every bull, but I damn well want as many bulls in the establishment's China shop as possible. ✊

Ben Swann could become a 21st century metaphor for the state of modern media....... "She/he did a Ben Swann".

Ben uses evidence and facts to reasonably question a narrative. Not reaching conclusions, just simply asking the questions and raising awareness. And by doing so, loses his job for simply doing his job rather well.

Last year ”Ben Swann Goes Dark” was trending everywhere, for about half a day. But then, the next biggest story came rushing along to replace it. Oh how quickly the news moves these days. Oh how quickly we forget. Paint me cynical, but could that possibly be intentional?

Welcome back Ben Swann and thanks for the heads-up @caitlinjohnstone

Ben is a great journalist. I remember when he burst onto the scene years ago and become a worldwide name in alt media.

I am so glad I know about your writing! You and your husband seem like wonderful people. I listen to your podcast as soon as it becomes available. Loooooooved the interview that Jimmy Dore did with you! Looking forward to more of your writing.

I too was thrilled to see he’s back (and like you Caitlin I have to say no one is perfect ).
I remember the first time I saw him, my jaw nearly hit the floor. I thought “how did this truth sayer get this past his producer?”.

It's great having Ben Swann back. He's a great journalist!

I’m so glad to see he’s back! True...no one is perfect.
Nice intro for those that may not know him. Thanks Caitlin!

The first time I saw him I was perplexed. My mind just couldn’t comprehend that he was speaking truth on corporate media!
Yay! Welcome back Ben!

Ben is the real deal. And that is why I made sure to add him to my list of HEROES OF TRUTH 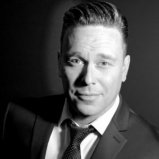 Bravo! Great report! Glad Ben is back in action!

I'm always looking for new voices that speak to truth or at least challenge the mainstream narrative. Thanks for introducing Ben Swann whom I hadn't heard of before.

It would be interesting to have people like him to suggest to SANCTION THE USA.

Damn this is hard for someone who doesn't have A TV and not much branded items either...

And if Americans also stop buying European goods then we don't have to ship eachothers bullshit across the globe, that would at least save a lot of fuel to begin with, Europe would look less like Hollywood set, Americans would look American again.

And branding, comes from cow farmers... Why on earth would anyone even WANT to wear a brand-tag, and on top of that pay the slave driver?

Please understand that i don't have anything against American CITIZENS.
I'm just a bit tired of low quality overpriced, often made in china (iShit) corporate american stuff.