The presence of our absents....Witness

In 2009, a blood cancer was discovered on my Mother.

At this news, we both decided to stick together until her death : The doctors prognosticated a year for her to live.

This year spent at her side was for me one of the most beautiful periods of my life as the complicity, the understanding, the connection between the two of us were profound.

She was a well-known Spiritual Guide (United States and Viet Nam) and her approach to the great departure was not embedded with fear or anguish, on the contrary, she was full of love and confidence...

During her lifetime, my mother loved traveling and for the last voyage, she set up ready. Her disciples and students, as well as her Master, were very present despite the international distances and she gave them an always cheerful and constant mood. As very spiritually elevated persons do, she knew the day of her departure... This allowed her to embrace very deep meditation for this last voyage. 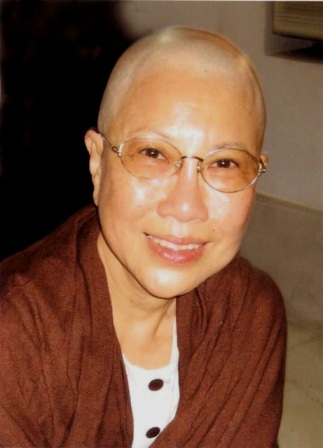 A few days before, I told her my wish to maintain, for the time possible, a link with her after her departure .

So we both agreed on a "code" to communicate: We will use incense which, when burned, sometimes leave ashes intact on the stem. Mom was not very good at drawing and the only one she liked to do everywhere was a lotus bud. She told me that she would make simple figures using incense to communicate with me.

A few hours after her great departure, on the 19th April 2010 on the afternoon, I lit three incenses and asked her to give me a drawing. The three incense burned to leave intact their ashes on stem, joining on the top to perfectly represent a lotus bud. From then on, I knew that our "code" worked.

Lately, you may have noticed, I edited some posts about my father's life, which was called "Anh" from his first name. It was also the name of my mother and together, they signed on their business card a double "A" entwined.

My mother-in-law having read these posts, had the opportunity to know my father better.

She then asked my mother (we kept her ashes in an urn, placed in an ancestor altar, Asian tradition, with the photos of the gone ones) if, after her departure, she was with Anh, her husband, reunited.
Here is my mother's answer: The three burned incense formed a capital "A" with the ashes ... Impressed, my mother-in-law asked another question:
"Dear Sister, are you here with us?"

Here is the answer : 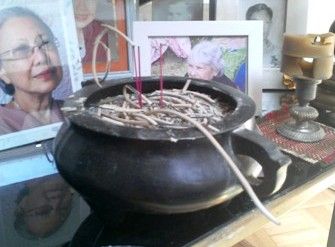 Explanations:
The right stem points to my mother-in-law (who was placed in that direction when she asked the question), the swirling rod points toward my mother (her urn). The two rods are connected since they are aligned on the same line, in a "mirrored" direction. But one is straight and the other is a whirlwind. detail of the whirlwind 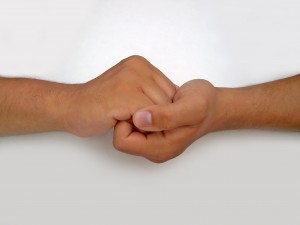 Of course, since 2010, I had many other clear answers from her by our graphic "code"... But for this post, I only relate to you the two most recent messages.

Thank you for reading me and see you soon for other adventures!
This post is of course dedicated to my mother, who has made us the great gift of trust and joy face of death.