I'm a biker, and I did something very irresponsible

This is me wearing the red scarf and my best friend (RIP) posing in the low lands in Scotland aside his wife's bike back in 2007. 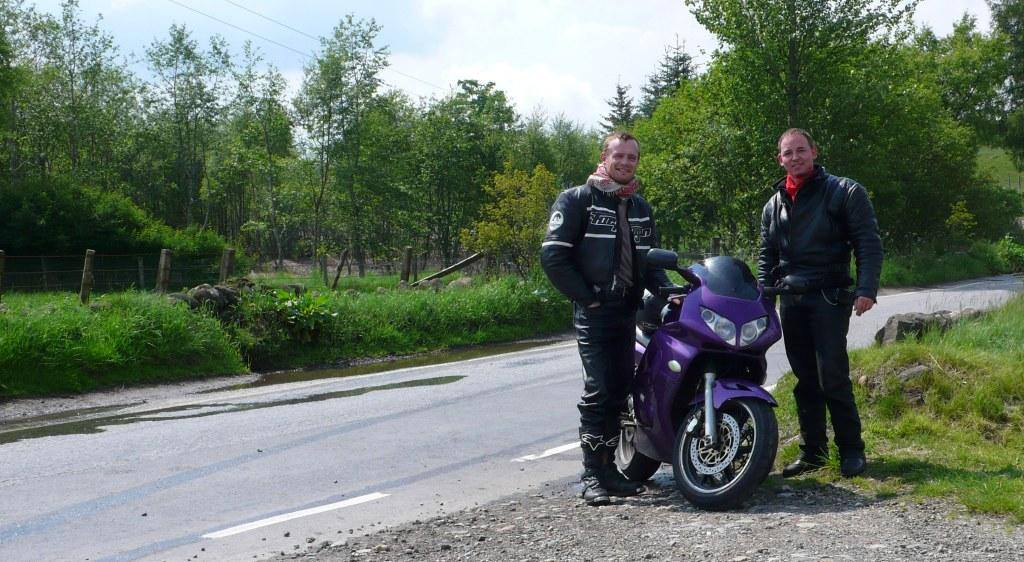 I have been riding motorbikes for longer than i remember, my first own bike, was a 125 yahama cross motorbike i used to ride on the sand dunes of Coro in venezuela back when i was 14 years old, it was lots of fun and i still bear the marks of burns and falls while riding in the desert wearing shorts lol.

But i actually started riding earlier... I'm not sure how old i was but i remember having lots of fun in a micro motorbike a friend of had when we where just kids.

Later on i had a few other bikes (I'll tell you about it in some other post). Because today i want to tell you about something very stupid i did recently that even though i'm not proud of it in retrospective, now it is done there is no reason not to enjoy the fun we had.

My son who is barely 3 years old had his first pillion ride on my 1991 1400 Suzuki intruder last weekend. My wife wanted to kill me but he and i had a lot of fun.

It all started when a couple of friends called us to invite us to share a box of oysters by the river in our city last weekend, they had bougth a box of 48 oysters (caliber 2) and 2 bottles of muscadet (I live in the region where muscadet is made so we have a great choice of them.)

I had spent the morning de-hibernating the bike and all i wanted was to go for a stroll, and this was the perfect opportunity.

But of course my wife declined and took the tramway with Valentin, while i set off for a little stroll and joined them by the river some 30 minutes later. This is europe, and this is winter time... But a real biker only needs a road, be it cold, rainy or snowy, the roar of the engine and owning a proper set of biker leathers are enough to cope with whatever weather it happens to be.

Sunday was a warm winter day, 1degree C and the intruder was idlying at some nice 80C being air cooled they are hot like hell so not so nice in summer time they make a perfect winter bike that keeps you warm.

Well, after the oyster we were ready to go back home and we realized my son was shivering (usually one looses about 1 or 2 C by the river) and i was letting the bike idle to reach riding temperature and we decided to sit my son on it while we waiter...

He was thrilled, he owns a little pushbike made of wood called the early rider and it has a mean chopper looks and there he was in a loud chopper (My mistake: un silenced Highway hawk straight pipes, but they look and sound mean just your hears bleed after a long ride hahaha) 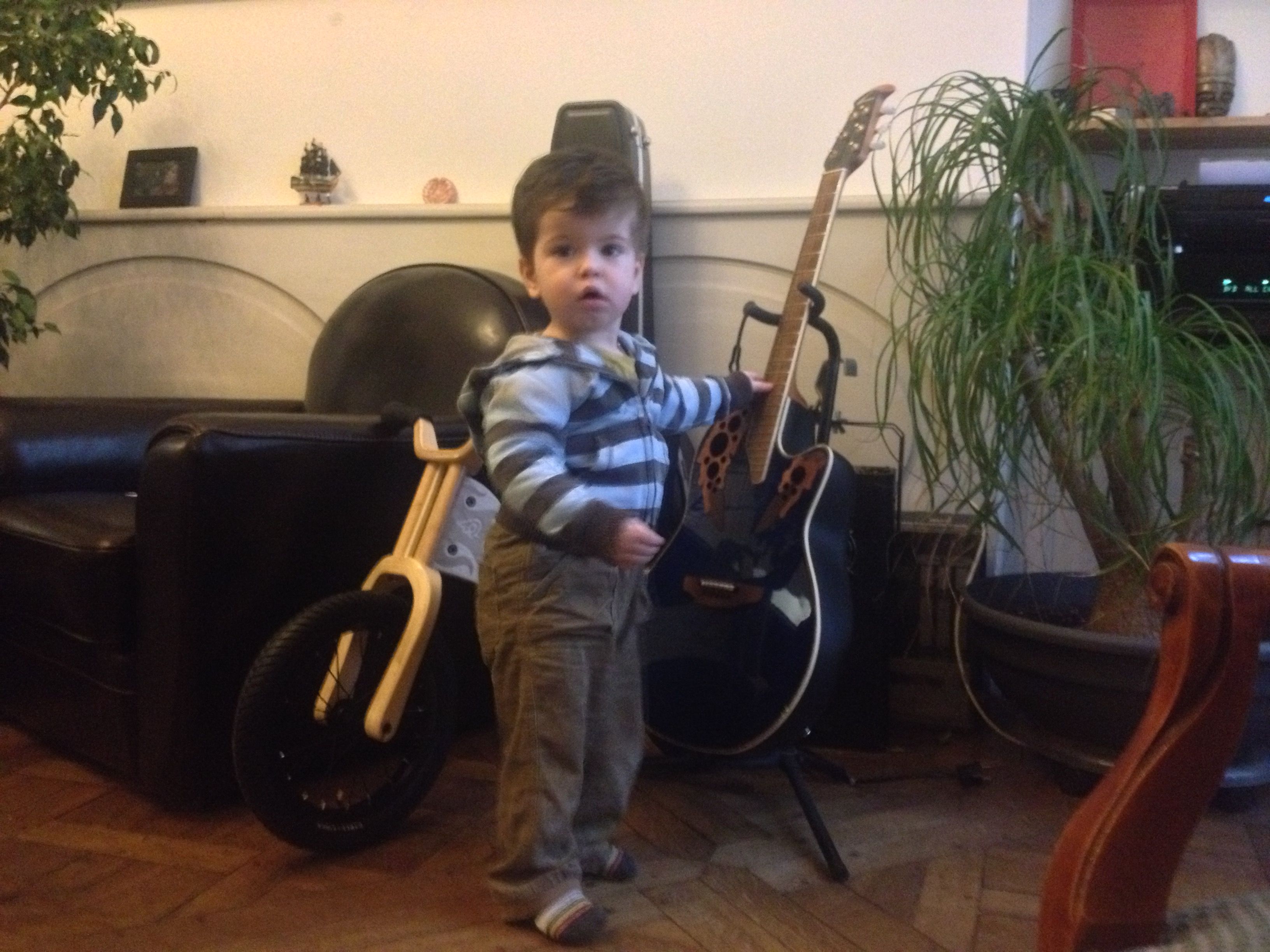 So obviously he was warm on an idling huge chopper motorbike (I might tell you some other day how i spend a lot of time with the engine disassembled in my living room while restoring and modifying it but not today) and he wanted to ride with dad...

My wife refused categorically, but once back in the stroller my son started shivering again, so i insisted a little, i had figured out since the teardrop shaped tank covers my knees it should not be unfeasible to sit my son in front have his legs under the tank and holding him with my own legs (Easier said than done with forward controls but still feasible... ) So she accepted wrapped him in a polar blanket and I made a makeshift harness with spider bunjee cord to secure Valentin to me, we set him and while a very unconvinced wife left on foot with the stroller towards the tramway station, i set off with Val to join her there.

I never seen him so happy and exited, he forgot he was cold, he forgot everything, the exhilaration from his smile was enough to convince me that being a biker is a genetic disorder, and my son inherited from me.

I cannot wait for him to be of age to own his first micro bike... But well I think it will be wiser not to do this again, i am sure i must have broke at least 10 road rules and laws... And probably if the police had caught me my son would end in social services... So I wont advice you try the same.

Al the same was a great day, my son is an early rider and i hope you enjoyed this little adventure that changes from the constant bitching my posts usually are.

If you like my stuff you know what to do, i'll sure be honored...

Disclaimer: To whoever may concern, the above works constitute a text of fiction emanated purely and solely from my imagination, and cannot and should not be accepted or proposed as evidence (And i had somewhere a helmet... )

Great pictures from you! Well done
Is cute Haha
Thanks for sharing

I rode a motorcycle with my father when I was 5 years old so I don't really see the problem with you taking your son for a ride at such a young age and it sounds like you were responsible and drove safely. I think its good for kids to have experiences in life rather than have a ton of things bought for them so I think you gave him a good experience =)
Ivy

Yes i know, i'm sure you have come across this text comparing the laws and rules we have today regarding safety with what we grew up knowing and doing...

As long as prudence prevails there is no real reason to worry...

After all people has survived climbing Everest to die falling of a chair...

Exactly! And what is life without a little bit of risk?
Ivy

Life without risk would be: A very boring, long amount of time... 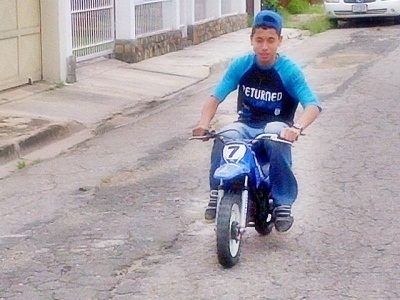 I think your wife was very brave! I can't stand those nerves, he looked happy so I doubt you should wait for his 18, I'm sure he took the bike off you long before, by the way cross the itsmo Coro - Punto Fijo in motorbike is for crazies, I felt that the breeze carried me, surely you will do it again just have to have a little prudence. I hope the translator will help me because I don't speak any English.

I loved riding in the sand dunes in Paraguana peninsule.

Your son... The future bike rider... Wish you the very best bike ride with your son as you tour round the world

Enjoy all the moments and adventures with your son. That will strengthen your lives as you have no idea and the time passes incredibly fast. Thanks for sharing that nice experience, you are definitely a proud dad! :) xx

Thanks @nairesc we did enjoyed a lot!

I need to figure out a way to steemit less and spend more time with him actually... So i'll try to follow your good advice

I hope he will!

He passed the rider test hahahaha

The pictures are amazing and beautiful

I was waiting to read the part where he fell off, and I am so glad that I didn't read that! Also it's a great thing that you've realized the error and potential harm; we as fathers have such a massive responsibility not only towards the safety of our little ones, but also to guide them how to be responsible themselves!

And the cat's in the cradle and the silver spoon
Little boy blue and the man on the moon
When you comin' home dad?
I don't know when, but we'll get together then son
You know we'll have a good time then

That's great! And I hope your son grow up pretty soon so he can ride with dad and you can enjoy your son as your best co-rider. Good luck! and be prudent.

haha! in singapore, the kid has to be at least 10 years old to be a pillion rider!

Pro Biker in making lol :p
Wish you and your son good luck :) wow this post is very beautiful and so excellent inspiring that .

You got a 18.56% upvote from @postpromoter courtesy of @nnnarvaez!

Congratulations @nnnarvaez, this post is the fifth most rewarded post (based on pending payouts) in the last 12 hours written by a Superuser account holder (accounts that hold between 1 and 10 Mega Vests). The total number of posts by Superuser account holders during this period was 1268 and the total pending payments to posts in this category was $8514.97. To see the full list of highest paid posts across all accounts categories, click here.