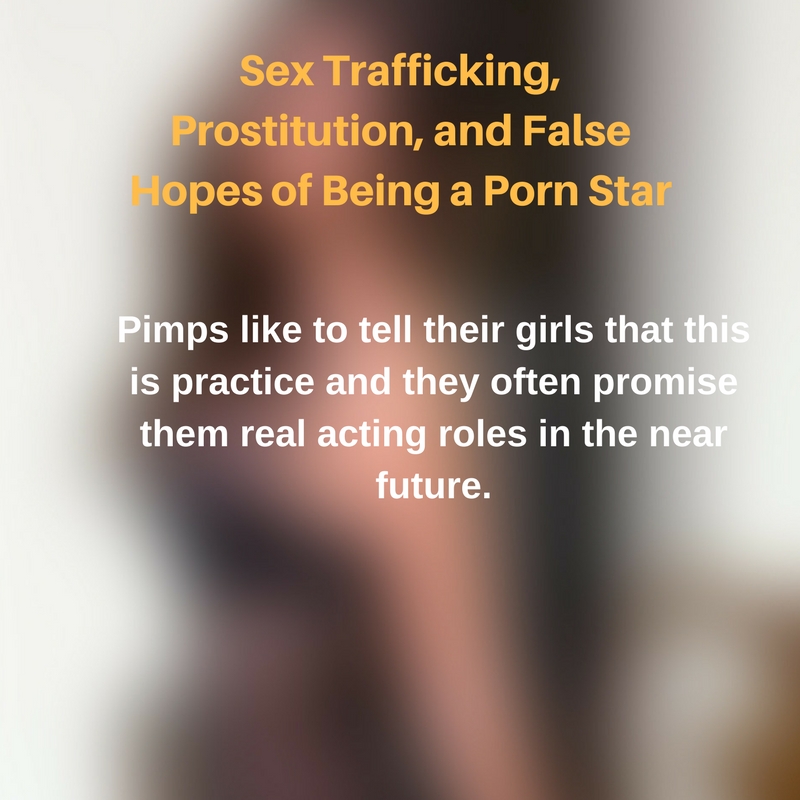 Most of the girls I worked with were in foster care or grew up in very broken or abusive households. Many were homeless. Their stories were all very similar.

An adult male sets out to find vulnerable, young females. This male will start to groom them as early as age 12. They promise to take care of them, take them shopping, buy them expensive things, give them love and shelter in exchange for performing small sexual acts when asked to do so. We know these males as “pimps.” Nobody is looking for these girls as they don’t typically have family that care about them or they are homeless or have ran away from foster care. The grooming process is the job of the pimp in order to control their girls’ every move.

When 18 comes around, their hopes are rarely achieved and the girls become harder to control. Some pimps let them go while others resort to physical and sexual violence to keep them in check. And just to be clear, while the majority of the children are girls, there are boys that are groomed and trafficked as well. It just may look a little different.

And I think that’s the saddest part - these kids end up with nothing in the end.

Greetings @liverehab. Thank you for spreading this awareness. Every Member of the Earth Nation Guild has upvoted this posting in recognition of the truth and importance of this article.

In the Earth Nation, we are activley persuing the embodiment of systemic change that will create real support systems for all victims of violence in such a way that this problem fades from normality.

This story touched our hearts. We wish to propogate it to our audience. All posts shared to our wall are also syndicated throughout our ambassador syndication network onto other social media platforms.

To repost this.... we would need to quote it.... and to add a section that focuses on how we as a people can empower solutions to help people in need like the ones you discuss in this article.

May we have your permission to repost this article, quoting it and sourcing to the original, while also adding our own perspective to it? We will forward 100% of the sbd profits of the article to you if desired.

Hi @earthnation appreciate the kind words. You are free to share this work but it needs to include attribution since it comes from our upcoming book on this subject. I am also fine splitting the SBD between us that you earn.

They see money and fame because they feel worthless

lets bring up some perspective here: people who rely on politicians for security and give their consent away (for the sake of safety) have the same issues: lack of self-esteem. The entire planet shares the same problem. You blog mirror just this.

@earthcustodians I think something is missing in translation. Can you try rewording what you are trying to say? I'd love to engage in conversation with you on this but it seems like something isn't coming through quite right...

Thank you, @liverhab, for this important post - puncturing the false glamour associated with the sex industry.

In light of recent sexual harassment scandals, it's time we address the pornification of popular culture & expose the sad, destructive reality of the sex industry.

Ah, it means a lot to hear you say that. Our addiction as a culture is deep/widespread and we are in a state of denial about it. By association, I think of French poet, Baudelaire’s line about how the devil’s greatest trick is to convince us that he does not exist!

It is so sad to know that some really bad people take advantage of this young kids.. Having 3 daughters scares me ..hoping and praying that child prostitution will cme to end soon🙏🙏

Thanks for taking the time to comment. There were so many stories I wish I could tell. The best thing that you can do is have the tough conversations with them and remind them of what kinds of situations they might encounter.

I am so blessed that I was able to send them to a Catholic School, so far their foundation on morality is stable, for now.....

I'm so blesssed that I was able to send my children to a Catholic school, somehow their foundation on morality issue is very stable, for now.. .....

This so sad reading this.. it seems that human trafficking is becoming a norm in my country...

The @OriginalWorks bot has determined this post by @liverehab to be original material and upvoted(1.5%) it!

it's really shameful.we must fight against this dangerous phenomenon.

Congratulations! This post has been upvoted from the communal account, @minnowsupport, by liverehab from the Minnow Support Project. It's a witness project run by aggroed, ausbitbank, teamsteem, theprophet0, someguy123, neoxian, followbtcnews/crimsonclad, and netuoso. The goal is to help Steemit grow by supporting Minnows and creating a social network. Please find us in the Peace, Abundance, and Liberty Network (PALnet) Discord Channel. It's a completely public and open space to all members of the Steemit community who voluntarily choose to be there.

We offer vote-buying, vote-selling and a delegation market. Join the community: https://smartsteem.com

Congratulations, your post received one of the top 10 most powerful upvotes in the last 12 hours. You received an upvote from @buildawhale valued at 77.67 SBD, based on the pending payout at the time the data was extracted.

Congratulations @liverehab, this post is the most rewarded post (based on pending payouts) in the last 12 hours written by a User account holder (accounts that hold between 0.1 and 1.0 Mega Vests). The total number of posts by User account holders during this period was 2620 and the total pending payments to posts in this category was $3328.56. To see the full list of highest paid posts across all accounts categories, click here.

This post has received a 30.24 % upvote from @buildawhale thanks to: @liverehab. Send at least 1 SBD to @buildawhale with a post link in the memo field for a portion of the next vote.

Thanks for sharing the story, upvoted

Congratulations @liverehab! You have completed some achievement on Steemit and have been rewarded with new badge(s) :