Why Japan has walkable neighborhoods and the US has not

First I have to admit that I will not be able to answer this question in full, because there are several factors involved in this, not least the simple fact that the US has about 100 times more flat space per head then Japan.

But there are factors that made the US a motor city country that often get overlooked, and I want to point you to one of those today: zoning laws.

What are zoning laws?
In short that are the rules you have to obey when building a house that are not related to safety. In the US, where zoning laws are a local thing, they are often very complicated. For whatever reason people decided to have a set of very strict rules of what can be build, effectively preventing everything that does not fit into the desired group to be unable to build.

Such exclusionary zoning is not done by accident. Very far from that, it is used to keep away “poor” people (often read: non-white) from getting affordable housing. Back after the end of the legal segregation in the US lots of zoning laws where enacted, often with open statements that is was to keep “colored” away.
Up to today there are lawsuits about this topic (read: The Atlantic).

But the prevalence of affluent single-family housings mostly on the edges of towns has led to two things:

First a very low density in a big area, which means that schools, shops and other places visited by a big part of the population are too far away to reach by foot. Even worse, there often are none (compare).

Second is the logical result: Cars. Cars and more cars. Everything has to be done by car, so there are a lot of cars. And a lot of streets to keep the traffic flowing.
But by now most people know that more streets often don’t mean less traffic jams. It just means that the area where people consider living is “driveable” is getting bigger, producing more low-density (cheap land far away from the city) suburbs and even more roads. Rinse and repeat. Another problem: the availability of cars makes it easy to dismiss movements for walkable cities (everyone uses cars anyway!). Even worse, a street like the one shown above is nearly as effective as a river in separating parts of the town. Even the most walkable city is divided by such a monstrosity.

Japan is a country which is instantly recognizable, not only because of the many sakura trees, but also because of its often unique building style. ( @boxcarblue just wrote an article about a part of it – the roofs – where a comment triggered me to write this piece.)

Japan can be said to have a hereditary advantage compared to the USA when it comes to walkable cities: A lot of the cities still have their old core (at least as streets) from pre-car times and people tended to not sell their land if possible.
Put this together with the fact that half of the population is packed in a few small areas (like Tokyo, Osaka, Nagoya), because most of the country is mountains, and you get high density areas. That is true even when there are nominally the same type of buildings. There is a big difference though to the zoning of US cities, as you can see in the screenshot I took from google maps. 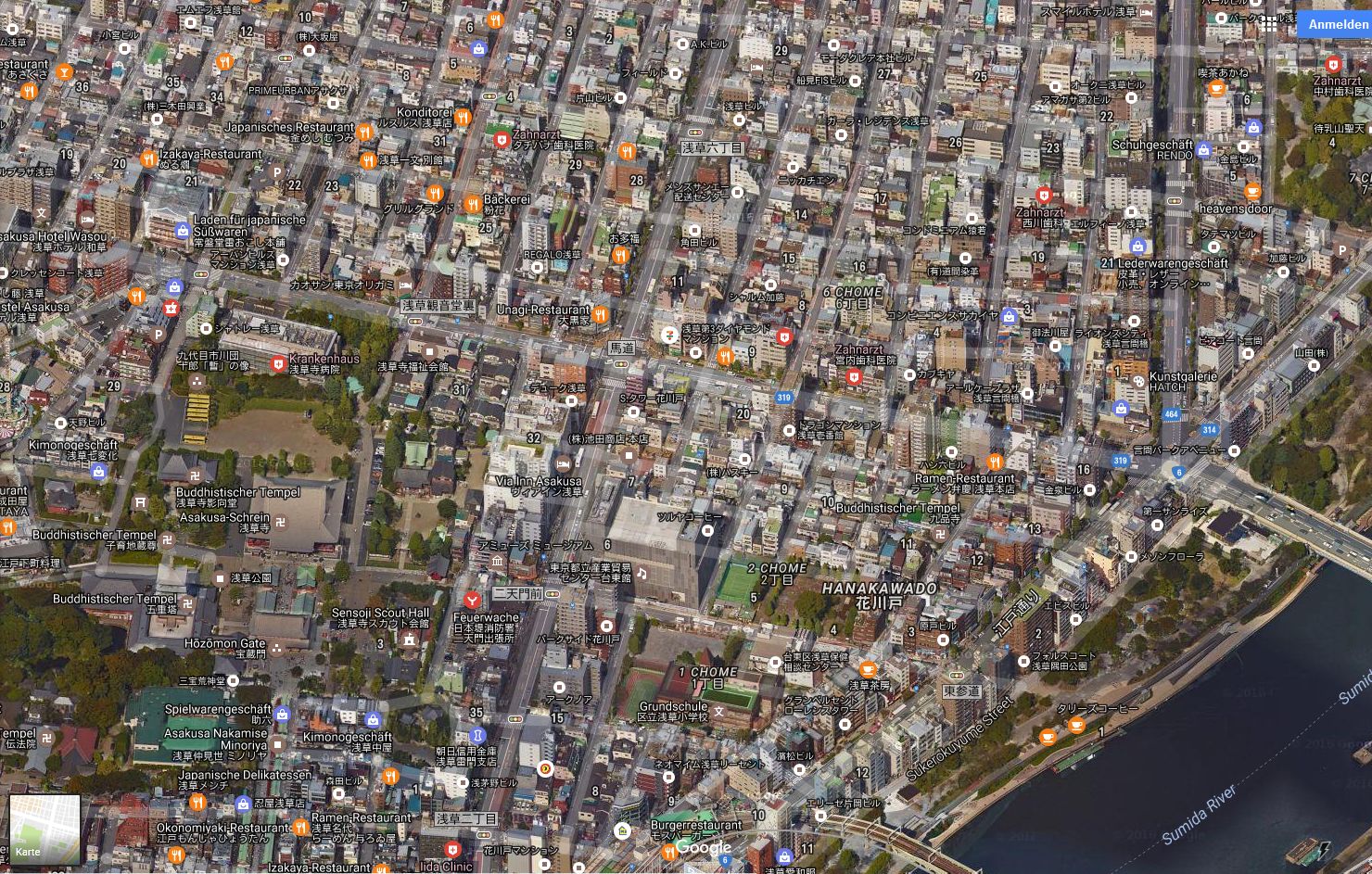 Now this is a completely random location in the center of Tokyo (okay, last half of the way I zoomed in to the Asakusa Shrine because you may have heard of it).

The area in the zoom is about the distance that you can very easily walk if you live near the center of the picture. Inside this 10 minute walk radius you have:

On most days there is no reason to even leave this area, not to mention use a car, if it isn’t for working!

As you expect from the center of one of the biggest cities in the world, there are several high rise buildings and lots of 4-6 storey high houses. But sprinkled here and there you can even see a 2-level single-family house or a house that is a shop in the ground level and living room for the shop owner above.

It would be hard to find that in the US in any area build after WWII, but in Japan that is just normal.
The reason is they have a very different approach to zoning. To say it a bit unfairly bluntly, the US makes zoning to exclude usings, Japan makes zoning to include usings.

The zoning is enacted not on the local level but from the central government. You only have a fairly limited amount of zone types and they don’t bother with sizes. They concentrate on using types, and you can build basically everything as long as you let in enough sun light (that rule can result in fairly strange formed roofs).

The general rule for the zonings is noise. In a residental area you may have small shops, but no big ones. Schools are only permitted in mixed used zonings, while heavy industry prevents use as residential area. Even in the exclusive low-rise residential area you can build (and often will have) small shops! Compare that to US suburbia.

To make it walkable

So if you are living in the US and want less car-dependency and more walkable neighborhoods you may want to press for zoning laws that are oriented more towards the Japanese model.
More mixed use, more multi-family buildings, less big streets.

I strongly recommend to now read the 2 articles of urban kchose that I used as a basis for this article. All pictures, if not stated otherwise, are from there.

People often say London isnt a city but a collection of villages. Its kind of true, and there are many small alleyways and funny little roads that seem to go nowhere.
Some skyscrapers are allowed, but there are specific places from which you must have an uninterrupted view of St. Pauls Cathederal dome, its such a significant landmark, even today. This prevents buildings in many areas exceeding 8 storeys in height and gives London its unique character.

In this case it is interesting how decidedly changing a seemingly "lofty" law can be.