Yesterday, I paid for my lunch with a Cryptocurrency Yesterday, I was working on developing an Ethereum application in Shoreditch, East London. I had recently read an article on CoinDesk entitled "Blockchain Comes to East London With Colu Local Currency Launch" that really piqued my interest. So I decided to go out and find somewhere to spend this "East London Local Pound" that I had read about.

Back in 2009, I had also heard about an interesting initiative to create a local currency called the Bixton Pound; that would only be legal tender in and around the, South London, borough of Brixton.

This was a physical paper currency, that was designed to be used by consumers, merchants and suppliers operating in Brixton; with the hope that it would help to raise awareness of the businesses in the local area and foster a community of people that bought local goods and paid for services from local merchants.

The Brixton Pound (B£) is money that sticks to Brixton. It’s designed to support Brixton businesses and encourage local trade and production. It’s a complementary currency, working alongside (not replacing) pounds sterling, for use by independent local shops and traders. The B£ gives local traders and customers the chance to get together to support each other and maintain the diversity of the high street and strengthen pride in Brixton.

Colu, are the company that created the "East London Local Pound" - which also seems to be referred to as the "Hackney Pound" (referring to the large borough in East London) - and are promoting the support of local communities and businesses by creating, local, digital currencies.

We have a big mission. We want to change the way we create and use money... we are encouraging sustainable and equitable economic growth while supporting local businesses

What really interested me about this is that the 'Hackney Pound' is actually a "Colored Coin"; using Bitcoin transactions to register the exchange of value.

The place that my colleague and I chose to go and eat, and spend our Hackney Pounds, was Franze and Evans - which describes itself on its website as selling "fresh, tasty, healthy food in the heart of Shoreditch".

It was quite busy when we arrived, but we managed to find a table inside; whilst you can see from the picture that some people were willing to sit outside of the cafe - it wasn't really warm enough to make this a particularly appealing prospect. Their menu was largely made up of salads - they weren't kidding when they said that the food was fresh and healthy!

What made this place quite unusual was that by going for a large salad, I actually got to chose to have a selection of 3 salads from the menu. As a result, I ended up with a vast array of different items on my plate when it arrived.

The salad looked apitising and tasted fantastic. Despite the food being a little expensive, I would definitely go there again.

Paying with a digital currency 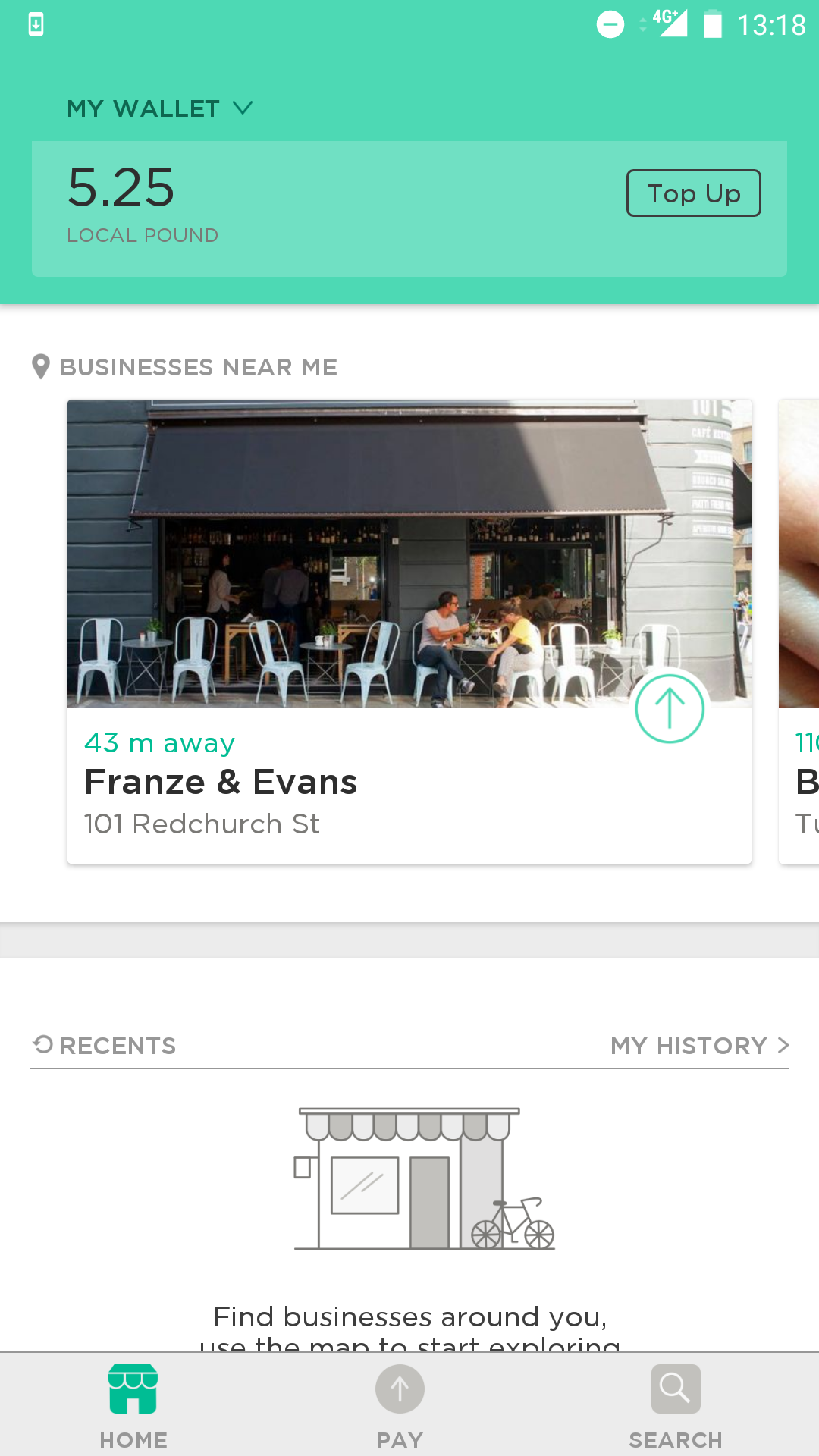 Colu's app looks slick and provides all of the features that you would expect - a wallet to see your current balance, to view past transactions, to be able to top up your balance, to find friends and establishments by name and to look for places on a map.

Paying, in theory, is trivial.

In practice, once we had eaten our lunch and asked for the bill the lady serving us asked the usual question of "will you be paying with cash or credit card". When we said that we would like to pay with Colu we were met with a blank stare. We showed her the app, and the picture of the establishment in the app, but unfortunately she didn't know what we were talking about. She went to get a colleague - who also had no idea what we were talking about.

We were starting to worry that we might have to pay with Fiat currency...

Luckily, the people working at the restaurant persevered with our strange request and went to find someone else. This lady knew what we were talking about and instructed us to enter the amount into the app and make the transaction. We did, the app showed a pretty animation and within seconds the app confirmed that the payment was complete.

Unfortunately, the lady wasn't able to confirm from her side that the payment had been made because her phone wasn't connected to the Wifi at the time. Since the cafe was so busy, she just said "I'll just trust that it went through okay" and we went on our way.

It was quite obvious that this was all still very new to everyone involved in the transaction, but I applaud Franze and Evans for having the courage to accept the Hackney Pound.

Would I do it again?

Yes, I would both go back to Franze and Evans and I will use the Hackney Pound again.

Not only will I do that, I will also try to promote its use in more places for the following reasons

Colu and other local currencies are available in places other than London and the UK. Make sure that you keep your eyes open for local businesses that might be trying a similar initiative out

Nice!! Looking forward to purchasing all my goods and services with crytocurrencies!💯

Indeed - I'm sure that we will get there eventually, but I think that it is going to take some time. We'll just have to keep taking one step at a time =)

It's great to see the adoption of cryptocurrencies - exciting times! 😁

It certainly is! Thanks for stopping by my post =)

It was =)
Thanks, I'm glad that you enjoyed my post.

""It was quite obvious that this was all still very new to everyone involved in the transaction, but I applaud Franze and Evans for having the courage to accept the Hackney Pound.""

Thank you for the kind words, it means a lot to me =). I'm glad to hear that you enjoyed my post.

It will be great if u pls check out my blogs.. Its my humble request to u dear Yep, and so many, many more!

Yes it is future of whole world..

Congratulations @avarice! You have completed some achievement on Steemit and have been rewarded with new badge(s) :

Interesting experience. The food looks delicious. I hope more and more restaurants do this

That's awesome! Thanks for posting this. It's great to see what this experience was like for you. I should see if there are places in my area that do this :)

Colu is a scam. its run out of Tel Aviv Israel ,the sextrafficking and moneylaundering capital of the world.