This is one of the "sources" that found "proof", allegedly. Let's take a look into it.

Examine the video purporting to have found "the building" and 1 (one) "survivor" of the latest "chemical attack" in the town of Douma, Syria. It's short.

I. What the Swedish journalist DID find: A man.

Nasser Amer Hanen, who says he witnessed the attack and "lost his family" to it (his body language is not convincing but it's impossible for me to assert if he is credible or not).

II. The other media in Douma were in the same area, but none of them found this one particular guy (maybe because there seems to be only witness in the whole town). But they did find many many other witnesses who didn't see or smell anything.

(The boy in the White Helmets video(winners of the Oscar and US-funded, thank you very much) is also there with his dad -everyone is there!- and he is interviewed to the total discredit of the official narrative. check the article at The Intercept. It groups a lot of different reports and sources. The Intercept's reporter, Robert Mackey, shares a lot of info in this piece, but I'm not entirely sure if he accomplishes what he intends or the exact opposite.) 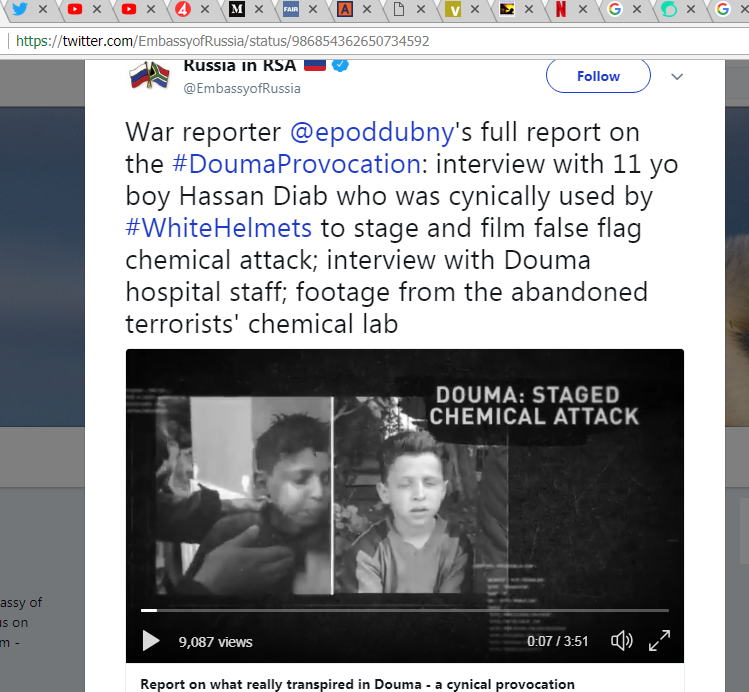 III. Stefan Borg, the Swedish journalist, enters the allegedly gassed building to find a "smell", but doesn't even consider to take any precautions (true, it happened 2 weeks ago, but still, according to this Chemist Phd chlorine dissipates immediately, there shouldn't be any kind of smells left, and if any, it would harm him). The witness talks about hearing a sound, we are not shown any kind of hole in the ceiling or walls, and the gas canisters are supposedly dropped by air. They look like this (below) not the kind of thing that would make a hiss, rather an explosive sound. It's possible a canister could be not that severely damaged and make a hissing sound, but the pictures below speak for themselves. Here comes the "spooky" part, are you ready?

The Intercept's piece (linked above) also notices this guy: 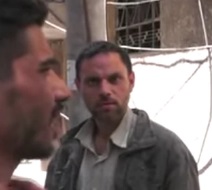 The article says that he was following the crews of the two single journalists that managed to get to talk to the one witness of the allegedly -always allegedly, even in their reports- chemical attack.

You can see him first, behind CBS's Seth Doane and who is apparently another witness, but a very secondary one, in sum. Perfectly framed, with an angry face because he is not a smart intelligence agent but an evil henchman of the Assad regime who is restraining himself from murdering the treacherous Syrians taking Western journalists to the prize in the spot. Then the evil minion goes and harras the second Western journalist, Stefan Borg. "We need permission for everything", said Doane to The Intercept. Makes it look like it's very "dictatorial" down there, but it's just some pictures of some weird Syrian Casey Affleck guy. The Intercept's article is also full of ad hominems and circumstantial pseudo-argument and seems to be intended to smear the "evil" Syrian regime. All reports linked here, "pro-" or "anti-West", seem to conclude that IF a chemical attack took place, it was more probably done by "rebels". IF...

You just received a Tier 0 upvote! Looking for bigger rewards? Click here and learn how easy it is to get them or visit us on Discord
$0.00
Reply
[-]
homerus (48) 3 years ago

Congratulations @homerus! You have received a personal award!