Now even drug-trafficking is SOCIALIST???????

This "debate" thing is going out of hand!

This is a response to @vieira's About your historical facts:

I. Let me discuss only one of your sources, if a drug trafficker and sicario (Escobar's "right-hand") is a credible source, then Escobar's son is also valid, even more valid since he is not a sicario but a regular citizen, an architect actually, and writer (not in jail, therefore not in the need to make bargains with god knows who for less time inside):

He says his father worked for the CIA. but then again, that's what he says, I don't know him.

II. This is about Drug trafficking from Venezuela to the US, before Chavez...

III. This one is a quote you can verify if you like... 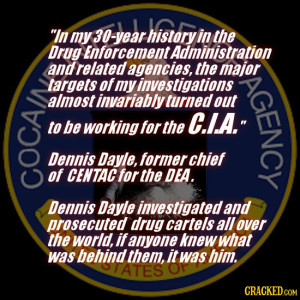 Well... my only answer (since I'm a socialist) is that the US is an EMPIRE, they control (or at least try to) everything... would they leave the INCREDIBLY lucrative drug market to some south americans in some jungle??

IV. Metania films will destroy your rightist perspective of the World: it's obvious leftist propaganda (although there's not a word of it or even economics, but I guess all dissidency or antisystem feeling is "leftist") DON't WATCH IT or at least cover eyes and ears in the most disgusting parts, they talk about the West in a way that makes us sad. Here it is, you can find all of them documentaries in youtube as well:

V. Some assorted documents on Drug trafficking by non-socialists.

https://www.counterpunch.org/2014/11/07/the-cia-and-drugs-inc-a-covert-history/
by Douglas Valentine, one the most important analysts on the CIA that does not actually work for the CIA...

https://www.counterpunch.org/2016/11/04/air-cocaine-the-wild-true-story-of-drug-running-arms-smuggling-and-contras-at-a-small-airstrip-in-clintons-arkansas/
By Alexander Cockburn, very famous American journalism and the uncle of this incredibly beautiful actress: https://nsarchive2.gwu.edu//NSAEBB/NSAEBB2/index.html
this one is about Gary Webb, who uncover the case tying the CIA, the CONTRAS and COCAINE!
the contents of the NSA archive (yes that's the US gov official page, sometimes they have to legaly publish their shit, too bad!):

https://www.veteranstoday.com/2016/06/04/the-cia-continues-trafficking-drugs-from-afghanistan/
Veterans today... they are mad because... you know how Uncle Sam treats his veterans, don't you?
(they are not socialists, I assure you)

I haven't seen this one yet, It looks promising...

https://www.globalresearch.ca/drug-war-american-troops-are-protecting-afghan-opium-u-s-occupation-leads-to-all-time-high-heroin-production/5358053
WARNING: this is a website mostly visited by leftist.

This one is the same case I mentioned about Gary Webb, but it talks about something I forgot: What did the CIA did with the cocaine??? they took it to the ghettos, to criminalize black people and DESTROY their society...

Conclusion: There is a lot more where that come from. And that is because we live in a deeply rotten world that NEEDS TO BE SAVED. HELP THE LEFTIST, HELP ME!!

great post homerus! keep it up! and thanks again for following!

Yes both right-wing and left-wing (militants? Thugs? Political bagmen? Spooks? All of the above?) are criminals but only the left-wing are going to make your children starve.

Curated for #informationwar (by @openparadigm)
Relevance:Manipulation of Contraband for Geopolitics