ICO Review Series #9: ICON: Could this be the ICONic ICO we have been waiting for?

More and more countries are accepting the crypto-currency revolution. Of course, Japan beats everyone to dust when it comes to progress. The reason Bitcoin has broken all of its price ceilings has primarily to do with legalization of Bitcoin in Japan. I heard news that India may follow the suit and may even be introducing its own digital currency.

Whenever a new technology comes in this block-chain crypto space, people often compare it with Ethereum instead of Bitcoin, primarily because Ethereum is a platform and not just pure currency.

It was EOS that was mocked as ‘Ethereum killer’ then it was Lisk and UBIQ (although built on ETH) that was supposed to take over the ETH space. All remain speculation or work in progress at best, at this time.

In light of these hype claims, will ICON standout as a winner? That is what we are going to discuss in this review.

ICON is a decentralized blockchain network where communities that are otherwise disconnected can connect. Their site introduces ICON as follows:

“The ICON project is building one of the largest decentralized networks in the world.”

Watch this video that gives a great glimpse at the project including an example of insurance industry.

ICON is acclaimed as ‘Enterprise Solution’. You create the ID on their platform which will then used for Enterprises to share, exchange and settle right on their decentralized exchange within the platform while easing the usability by use of AI while being scalable and staying truly decentralized at the same time.

Think of Civic meets ETH and beats the shit out of EOS and Bancor at once! How powerful would that be? Don’t believe me? See below chart from their site: 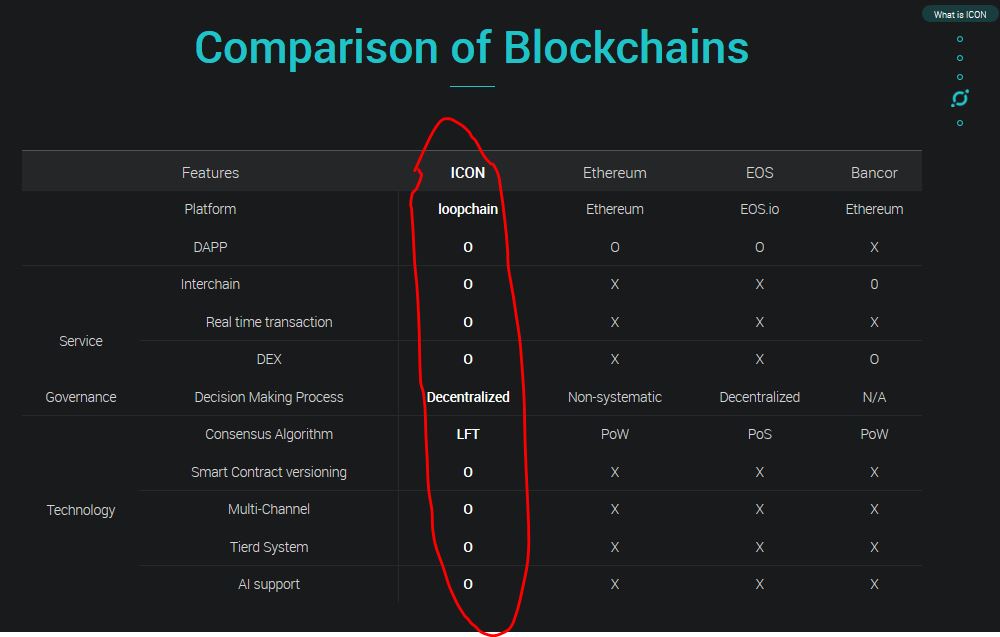 I am assigning 35 points.

ICON’s Whitepaper offers a very unique insight that is missing in most ICOs, that is:

Most ICOs these days are spin off of some previous idea or some outlandish goals with teams that neither have means or knowledge of achieving even fraction of such grand claims.

Their team consists of Advisors, Foundation Council, Blockchain Department, AI Department and Design, Marketing, Security Departments. I have not seen such a big and rounded team structure in any of the recent ICOs (that I have looked at).

Just reading through the profiles, you will find it abundantly clear that none of these team members are rookies. For putting together such a divers, qualified and abled team together I am assigning 20 out of 20 points.

3) Active presence in the Market:

Team is working with over 25 securities firms, 6 hospitals, universities, banks and more. An oper-source project funded by KOREAN GOVERNMENT.

Being South Korea’s first ICO, and with China imposing restrictions recently, this ICO may be difficult to get on (as there will be stiff competition from investors) but for those that manage to get on it will be glad, in my opinion.

4) Acceptable cryptocurrencies to participate in the ICO:

Contribution has hard cap of 150,000 ETH, at the current price that would keep this project around $36 million dollar mark. When half-assed projects like Tezos can raise 120 million dollars, I am sure this project is going to hit $200 million market cap in months if not weeks.

That will put the ICX (ICON token) price from ICO price of .10 cents to .55 cents. And I believe I am being conservative here. I never recommend investing your money in any project for the sake of pure financial rewards and even if it takes longer for the financial rewards to show – this project is worth backing up for what it promises.

You can only contribute ETH to take part in this token sale and as a policy of mine – I cannot assign any points when the choice to participate is limited to BTC and ETH.

I have not reviewed ICOs for a long time now. It was not because of lack of ICOs but just the sheer insanity in the ICO space where everyone is trying to milk the gullible (and sometimes greedy) investors.

In this time, ICON which is Korea’s first ICO that is backed by Korean Government itself has come as a light in otherwise darkening ICO space.

I am thrilled about their existing work product, amazing team and possibilities it promises in the ICO and Blockchain space.

For the sheer number of BS ICOs that I had to go through to find this gem, I am assigning 20 out of 20 points.

Verdict: I am IN

With recent ICO space ban in China and potential restrictions that may sprout from across the world, it is even more important to pick a good ICO project before we part our hard earned money.

With Korean Government itself backing this project, it is a welcoming relief to otherwise distraught and panicked Cryptoworld.

A working product, established network, amazing team, deep expertise are some of the strong indicators of a viable project, I see all of them in ICON and I do believe that they will help ”Hyperconnect the world”.

hopefully that means something good?

Any idea how much was raised during the preico stage?

all sold in 6 hours!

Hi rkreddy, have seen your balanced articles. Could you check out Graft.Network and do a review on it? Thanks in advance.

before I do that - why do you think this is special when there are so many payment solutions out there?

Do you know which exchanges are currently listing ICX?

Not available yet, they are doing AML (anti-money laundering) - it will be available by Dec, hopefully!

Binance now has it listed!

Cool. I ended up buying on HitBTC.