Humans were already trading in the early Stone Age*

Three different studies indicate that these behaviors arose during a period of tremendous environmental variability. 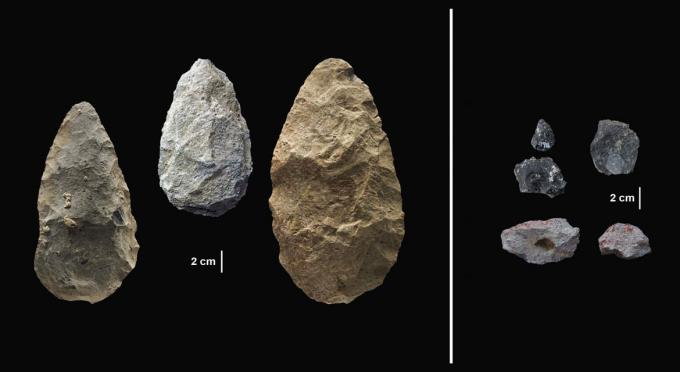 Anthropologists at the Smithsonian National Museum, along with an international team of researchers, have discovered that the first humans in East Africa had begun to market with other groups , using colored pigments and making tools more sophisticated than those of the Early Stone Age. .

These activities represent the oldest known fossil record of Homo sapiens and are located tens of thousands of years earlier than has been demonstrated , so far, in East Africa. These behaviors, which are characteristic of humans who lived during the Middle Stone Age, replaced the technologies and ways of life that had been in effect for hundreds of thousands of years.

The evidence comes from the Olorgesailie basin in southern Kenya . Precisely, this area has an important archaeological record of early human life that spans more than one million years.

The evidence indicates that these behaviors arose during a period of tremendous environmental variability in the region . As earthquakes remodeled the landscape and the climate varied between wet and dry conditions, technological innovation, social exchange networks and early symbolic communication would have helped the first humans to survive and obtain the resources they needed, despite these unstable conditions.

According to Rick Potts, director of the National Museum, "this change to a very refined set of behaviors, involving greater mental abilities and more complex social lives, may have been the advance that distinguished our lineage from other primitive humans "

To arrive at these conclusions, sediment and paleoenvironmental data were used (temporarily restricted) that served to evaluate and reconstruct the ancient environment in which the primitive artifacts lived .

The environmental variability of the area caused more sophisticated behaviors in some primitives in the early Stone Age.

Each of the three studies focuses on a different aspect of this research . The first, led by Potts, describes the adaptation challenges that the first humans faced during this phase of evolution . Alison Brooks, professor of anthropology, has authored the second article, which deals with the evidence of the early exchange of resources and the use of coloring materials in the Olorgesailie basin. And finally , Alan Deino, of the Berkeley Geochronology Center, details the chronology of Middle Stone Age discoveries .

The people who lived in this era manufactured and used large stone cutting tools called handaxes. Starting in 2002, Potts, Brooks and his team discovered a variety of smaller tools and more carefully in the Olorgesailie basin. The isotope dating of Deino and his collaborators revealed that the tools were surprisingly ancient: they were between 320,000 and 305,000 years old. These tools were carefully elaborated and were more specialized than the big ones.

The geological, geochemical, paleobotanical and fauna evidence indicates that, at the same time that the earthquakes were continuously altering the landscape, a prolonged period of climatic instability that began some 360,000 years ago affected the region . Potts says his team's findings support an alternative idea. The environmental fluctuations would have presented important challenges to the inhabitants of the Olorgesailie basin, which caused changes in the technology and social structures that improved the probability of obtaining resources in times of scarcity.