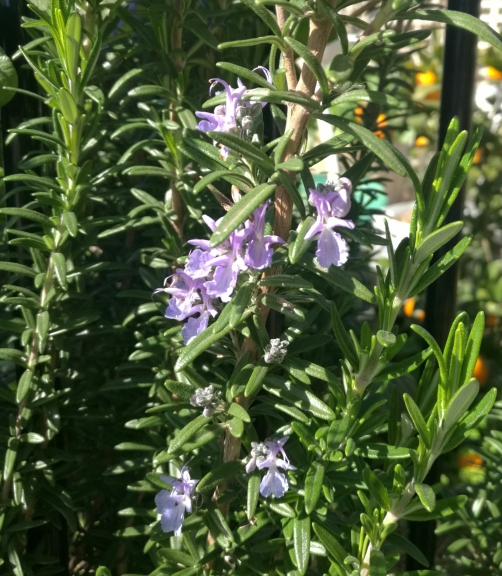 A herb well known in tradition and in the kitchen, Rosemary has been a staple in the West for millennia. It was well loved by the Ancient Greeks, and is just as well known today.

The taxonomic name, Rosmarinus means, literally, ‘Rose of the sea ‘ and alludes to the way it overcomes the harsh conditions on the coast where it was originally found.

Rosemary is a member of the mint family, though not sharing the growth pattern and love of mosture that is shown by the true mints. Rather, its membership to that family comes from the features of its flowers. That’s how most taxanomic choices have historically been made.

What it does share with mints is it’s aromatic nature? Rosemary oils are some of the most widely used in the world. So how is Rosemary good for us? Good question.

There are two areas where Rosemary predominantly works. One is the nervous system and through that, muscles and circulation. The other area of effect is the blood, particularly, it’s effect on the body’s use of blood sugars.

Rosemary has a strong effect on our nervous systems, it stimulates the parasympathetic nervous system, especially the voluntary, smooth muscles of our hollow organs such as heart, gall bladder and arteries ( I tend to think of arteries as an organ in themselves Science has discovered that they are far more complex and important than being merely pathways for oxygenated blood that most of us were taught about in school).

At the same time, Rosemary calms the sympathetic, voluntary nervous system and muscles.

This dual effect makes Rosemary ideal for blood pressure and other circulatory problems caused by stress. Rosemary sends blood to the head (the opposite of Lavender) making it is useful for giddiness caused by rapid rising.

Through its effect on circulation by its stimulation of arteries, Rosemary can clear areas of congestion and stagnation. It is traditionally used externally to increase local blood flow (that’s called rubefacient) to areas and relieve pain through clearing congestion and inflammation.

Rosemary can help with blood glucose problems as it helps the body to use glucose once it is in the blood stream. It stimulates the liver and brain and, through aiding the use of blood sugars, increases memory…that’s it’s number one traditional remedy! it also aids thinking and memory by stimulating blood flow in these organs.

This great kitchen herb helps the digestion by stimulating the gall bladder to produce bile, then it aids the liver by helping it burn sugars, then it also helps the stomach and intestines to move food through. Is it any wonder that Rosemary is a favoured herb in so many kitchens!