Many of you have probably heard of gossip magazines. People read them to find out about gossip. Who's flagging who etc. Humans naturally want to read this stuff for some reason. Check out this post from 3 months ago.

I saw the flagging wars at steemit which involves @dan and @ozchartart. And this is what i am going to talk about in this post.
To a user like me, yes, it seems juicy to have such political squabbles and flag wars. Some steemians have stated that it is childish and trolls and such. But I don't really think so. In fact, i think it may even help retain users, especially the nosy ones. Just some reasons below
-From the post above.

Did you know that @dan orchestrated the modern flag wars? (Now I'm not saying this is true, but let's go along with it for now). He is the game master pressing all the buttons and getting people involved. The @ozchartart episode IV saga exploded into a full franchise still going on today.

Who are the modern players? There are too many to name, but here are some memes and pics showing a few of the recent characters involved that have captured my attention with their war stories. 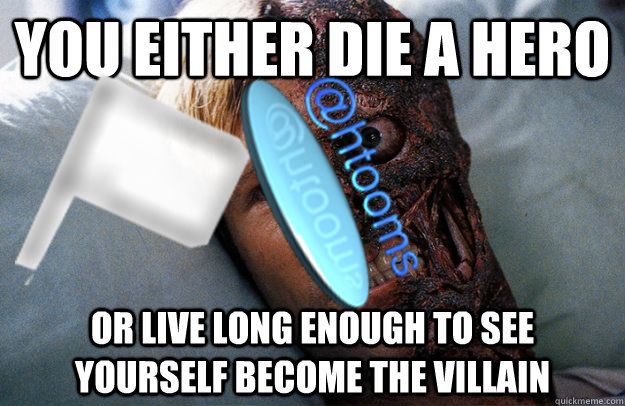 .
@thooms started off becoming a whale because "people quit due to downvotes". Within no time he was pulled into the flag wars, downvoting people to hell.
He is currently on -3 reputation. He could have confronted flags with upvotes, but the pull of the Flag Wars was too strong.

“The supreme art of war is to subdue the enemy without fighting.” - Sun Tzu Next we have @seablue who is being flagged infinity by @berniesanders (sitting in the front tank). @seablue used to have a higher rep than me. His rep is currently 60 so he's still intact. This mini battlefied on the flag war has led to @seablue posting more content than ever before! Most of it flag related. Check out those views!

“Move swift as the Wind and closely-formed as the Wood. Attack like the Fire and be still as the Mountain.” - Sun Tzu

@berniesanders has developed mutually assured flag systems. If you want to get flagged, you merely have to flag him.

“Attack is the secret of defense; defense is the planning of an attack.” - Sun Tzu

There are more people involved than that, but I'm all out of memes...

If you check out the views on flagging/flag wars related content you may notice that the views are high. If Flag Wars are supposedly bad, why are so many people interested? How many people did you meet on the battlefield? Would we have remained cold hard sexy automatons if trial by Flag War hadn't rebirthed us as natural human beings?

Top flag wars search shows How to Find Flag Wars with Ruby by @inertia. How cool is that!? A tool to help you find and watch in real time!

You might be thinking that the Flag Wars drove people away, but they didn't.

The drop in rewards did not lose us traffic and creation; receiving less than before/loss aversion did.

Are the Flag Wars a false flag to distract us because we are too impatient for the Fully Asynchronous Blockchain Rendering with Independent Conformity (FABRIC).

“Engage people with what they expect; it is what they are able to discern and confirms their projections. It settles them into predictable patterns of response, occupying their minds while you wait for the extraordinary moment — that which they cannot anticipate.” - Sun Tzu

All I know is I want my Flag Wars t-shirt.

Steemit/Busy currently do not have communities, but for now the Flag Wars have acted as a catalyst in building communities and strengthening our blockchain.

That´s an interesting theory. I´d go one step further: flag wars happen since people don´t know what else to do with their time here. There is neither entertainment nor amusement to find. Boredom is the no. 1 reason for trolling, I´ve just published an article about the very same topic.

That would be a cool steemit promo, a flag wars steemit logo in a shirt ;)

What about hug-war?
Or Lord of War with Nicolas Cage?

I think the whole thing is fucking pathetic to be honest! I say to all parties of this flag war, grow up, shake hands and use steemit properly instead of bringing it down for everyone

The problem is the Flag Wars are caused by Whale users having god like power to flag/downvote anyone they want into oblivion. They have the power to do this, and so they use it anyway they want, which sounds fair except those who are not whales have no way to combat this.
They upvote their own comments, downvote others for doing the same, etc etc, one rule for them, another rule for everyone else. Rule by force through downvotes/flagging.

use steemit properly instead

The whales in question would say they are using it how it was designed; for them to have lots of power and do whatever they want with it.

This wouldn't work for preventing spammers and plagiarism. Many community members have suggested plausible ideas, but this requires implementation from our devs, a lot of who are busy with other high priority things. In time this will be resolved with code, but for now the Flag Wars continue.
With enough experimentation and delegated voting, we could come up with ways to counter whales without having to gain whale power or rely on waiting for code change.

In my time here of just over 3 weeks I can honestly say I've never needed to flag anyone, I did once by accident cos I wanted to see what would happen haha