Why Libertarians Should Target Millennials As of 2016 Millennials are the largest voting generation in the country and, over the next 8 years, will begin to cement their voting habits for the rest of their lives. Similar to how the Baby Boomers have dominated the last 30 years, the Millennials are likely to control our political landscape until the mid 2050s, or so. But why is this important for libertarians?

FIrst, because voting is actually shown to be habit-forming (Footnote 1). This means that if people participate in the voting process at their youngest possible opportunity, they are more likely to vote throughout the rest of their lives. And if we don't fight statist belief in this generation, we are likely not going to end the state purposefully and without a catastrophic collapse. With Millennials being the largest voting population, we want them to vote. And we want them to vote for us instead of either of the old parties.

By targeting Millennials NOW we have a fighting chance to defeat statism. We know we only have until a person's late-20s to cement their voter affiliation for the rest of their lives (Footnote 2). And since the oldest Millennials are already 35-36 years old, we're running out of time. We won't be the only ones with this idea, but with the Baby Boomer power structure still firmly entrenched in the old parties, the Libertarian Party is uniquely positioned to allow for a Millennial re-branding.

One way to create this re-branding is to focus on running young candidates and electing young people to officer positions within the party. Millennials are the first generation who grew up developing friendships and relationships with people via digital contact. Unlike the Baby Boomers, this digital connectedness wasn't something that we learned later in life. It was the norm for us from as far back as we have memories. As a result, we are less likely to think of our "community" as a geographic region - like a neighborhood - and more likely to think of community as "our meeting place of ideas on the internet." Think about that for a second. We are the first generation in all of human history to not attach the concept of community to our geographic location. This stark difference between us and even our closest friends from Gen X means that our upbringing is uniquely married to every generation which comes behind us. We need an army of non-statist Millennials to gather as much political experience as possible in order to entice the majority of that generation to vote - and vote for us - if we are to defeat political statism this century.

This article is a part of a series of articles called "Libertarians Should Stop Trying to Appeal to Voters" which starts here: https://steemit.com/finallyfreeamerica/@benfarmer/libertarians-should-stop-trying-to-appeal-to-voters

Russians are on "our" side.

They are part of our Judeo-Christian heritage and our "brothers and sisters".

It is Islam that has nothing to do with Western thinking!!!

The alienation of Russia by the West is a deliberate one: look no further than Wall Street and their serfs: the liberal politician.

We should fight this with tooth and nail.

But how? Where is the leadership to fight this madness?

I don't understand the connection to this article.

What do libertarians have to do with Russia?

Your article made my day especially with this point "One way to create this re-branding is to focus on running young candidates and electing young people to officer positions within the party".

your article is very educating, i love it. keep up.

Congratulations @benfarmer, this post is the second most rewarded post (based on pending payouts) in the last 12 hours written by a Newbie account holder (accounts that hold between 0.01 and 0.1 Mega Vests). The total number of posts by newbie account holders during this period was 3300 and the total pending payments to posts in this category was $2393.83. To see the full list of highest paid posts across all accounts categories, click here.

Oh, boy. Anyone want to start a pool to have some fun gambling on when Larkin RosenWhine will pipe up again on this?

Ok. Where do the 25-35rs hang out? Any ideas on how to target market them? Are we after "family people" or single professionals/career people? And any specific plans for college campus activity? Surely you aren't waiting until the LP "establishment" makes a move, right? Do you see any value of working with the Mises Caucus and Michael Heise?

In either case, you are 100% correct in reaching out to this group. I "ran into" Ron Paul at 31 (in 1987) and EVERYTHING CHANGED. On so many different levels, I can testify as to the truths you bring forth.

I mean, I probably won’t go into specific tactics since my job depends on it. But I’m always open to hearing about more specific methods of doing this.

Well, to be straight up with you... and speaking from over 40 years experience, we don't want to discuss all the ideas out here in "public". Some things, for sure are fine... in the hopes we attract "young talent" who likes this Vocation and can't stand the thought of selling out for 30 pieces of silver to the jackAss or Elephant.... but is presently stuck thinking there is NO WAY to make a living as a manager in the LP. Seeing our activity "in the news" will show them Adam's team is different than the 47 years of LP LOOOOZERtarianism. There is no reason a "Ron Paul Revolution" style offense can't be manifested within the LP, right? Sadly, Ron's efforts were totally wasted within that god-awful GOP tent; suffocated under a pile of dung.

So, first step is to create some sort of "dugout" where you and Adam can invite people in via references from people you have met personally. Even if we just communicate via email with the cc' and replyAll... old-school, is fine. [email protected] Adam reads (and on occasion responds) to my letters.

Second, is to figure out how we can create paid-positions to keep your staff active during the 2 year cycle.... Their job is to seek and seed. Find Kokesh clones and get them active. Recruit manager types, too. I know Adam and the rest of the AnarchoCapVols cringe at the idea of "professional politics"... as I realize the goal is to make them obsolete. However, I keep repeating: Ballots or Bullets; pick one to make a change in governance. Statists never reach a plateau of happiness; they always go the that next level of brutality. We still have a chance to stop and wrest power from them peacefully...

At first, I was happy just working the prospect of getting Adam on that debate stage in 2020. But now that he is on a quest to purge the LP, we have a chance to achieve more IF the state parties follow suit. That is the stuff we can talk about in private.....

Agreed. But I certainly wouldn't call one of the goals a "purge" of the LP. We just need to encourage libertarians to join the LP. Right now, the vast majority of libertarians don't participate in the Libertarian Party, which I think is silly, or even the work of cointelpro-type actors to try to keep non-statists out of the electorate.

precisely. Yet, you don't want to call what is necessary, A PURGE? How about a TOILET FLUSH? Would that serve us better? Drain the Swamp was already taken. Sorry.

Who wants to come to a nice meal being served on dirty dishes by waiters with the flu? hmmm? You think their... er, our refusal to return has been "silly"? What is the point of saddling onto a ride where only castrated "yes men" have been welcomed? The way the LP has been until Kokesh flexed hard back in January, it seemed better to me to build libertarian towns, cities and villages... maybe even counties with Independents (NPAs) and a PAC. Are you aware of what is taking place RIGHT NOW in Frostproof, FL?... and Vice Mayor Martin Sullivan?

CLEAN HOUSE... before you expect libertarians to return; once bitten, twice shy. And Adam seems fine with that task. We don't need to pussyFoot around this dire need; he's not. Why are you?

And I believe Michael Heise will put his Mises Caucus behind the effort if y'all can come to terms you both feel comfortable with "going public" about.

and yes. Larken Rose does seem a bit "over the top" with his stance against putting the American electoral forum to good use. Me thinks he protesteth too much. I have seen, first hand where men with past IRS issues, sell out to their massah for "mercy"... being assigned to destroy the LP where needed. He is not above suspicion. He really started to squeal once I posted this on his Steem postings.... I hear, and smell a rat! 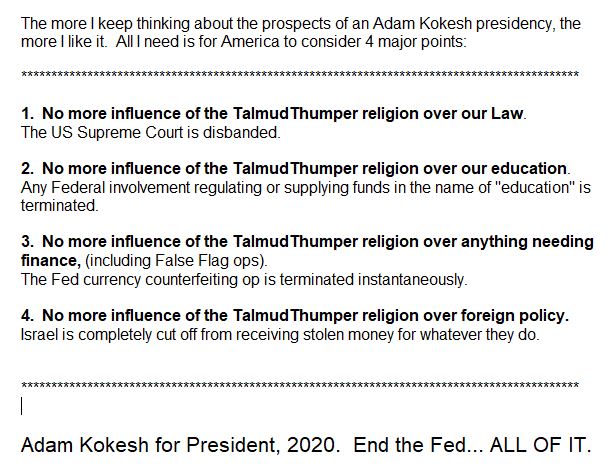 I have much faith in Michael Heise but so far the Mises Caucus, and Adam's campaign for that matter, are unknown quantities. We'll learn much more at the national convention this year.

We could make them "known" in Libertavia in about 20 minutes. Pay Ron Paul to do a 60 second commercial.

That's not how it works. They need to seat delegates.

Mr. Farmer: See my comment in this posting regarding the ad space idea.
https://steemit.com/freedom/@adamkokesh/e206vyc7

Isn't it terrible that the system is designed to make us play the game to change it? I hate getting involved in such clearly evil institutions. However, We should all take our turns testing our patients with electoral politics, it builds character.