AESOP'S REBOOT, FABLES FOR ?KIDS?: The Donkey With Two Mouths

A short fable exploring the corruptibility and self-serving nature of politicians.

Most kids' books I've read suck. Invariably, when reading them to my son, I drift to sleep and mumble along until he slaps me awake. I know he's bored too, but he's an empath and doesn't want me to bear the guilt for my crap selection. Yet, we continue on, borrowing these turds from the library because they're free and we both want to utilize our tax dollars to the fullest. But I digress.

Children's books should be fun and educational for all involved. More importantly though, they should stretch a child's elastic mind. Why not teach kids thought-provoking, even prickly concepts rather than pandering for their cheap giggles with lame, sing-songy rhymes about an egg falling off some god damn wall? Why shouldn't a three-year-old be armed with a basic understanding of entrapment? Who says a five-year-old can't appreciate the irony of the death penalty? If handled properly, a four year old CAN comprehend financial bubbles just fine! Sure, the child won't digest every nuance, but shit, they won't know what they're yapping about when pledging allegiance in kindergarten and that doesn't stop the state from requiring them to do so every morning does it? Let's do a solid for our kids, let's teach them our version of colonialism nice and young before the state has a crack at it. Kids aren't stupid, they're empty and it's our job to fill them up! It's not that fucking difficult. Get some cute animals, boil the concepts down to the basics, read with a cutesy high-pitch voice and blammo! Knowledge blasted into that little brain. No need to keep dragging some goofy, self-righteous bird in the room to lecture them for the twentieth time that stealing is wrong. Screw you bird!

So sit back with an adult beverage, your tablet and a kid or two and let's pick up where Aesop left off. And be prepared to answer questions. Lots of interesting questions.

The first fable in this collection will explore POLITICIANS...

The Donkey with Two Mouths

The donkey, recently elected as representative of the herd, was known for his charisma and his subtlety of language. Since birth, he had an innate ability for nuance, a special talent for parsing language and crafting arguments of undeniable rationality. Overtime he worked his way through leadership roles among the herd ultimately earning his most recent position as general representative. 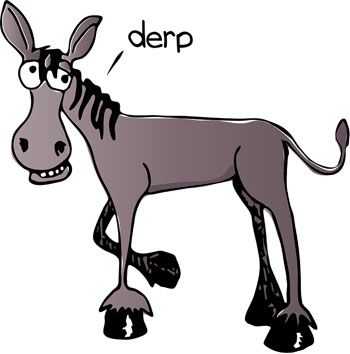 As representative, the donkey's first order of business was to offer a proposal to the farmer from the herd. The proposal? Convince the farmer to open the auxiliary paddock for the donkeys. You see, the existing paddock had very little grass and the donkeys were constantly hungry and quibbling about who ate the most. A fresh paddock for grazing would solve most of the donkeys' quarrels and improve life greatly for all. The representative donkey, wholeheartedly backing the proposal, spoke in colorful language to his constituents about how winning the new paddock would improve the lives of all donkeys. For a slight increase in workload around the farm, the representative donkey proffered, the farmer would gladly offer up the vacant paddock. The donkeys were very proud and full of hope.

Immediately prior to his proposal with the farmer, the donkey was approached by a mischievous crow. The crow, obnoxious and talkative as he was, had been hired by a school of wealthy business fish who resided in the pond at the far end of the farm. The fish, with pockets deep in both corn and apples, used their substantial corn holdings to hire the crow to speak on their behalf. You see, the fish had their own interests for the auxiliary paddock and wished it dug into a fresh new pond into which they could expand their vast enterprises. The crow, knowing just how much a donkey loves some apples, had, on authority from the business fish, permission to spend as many apples as required to get the donkey "on their side". Discussions ensued between the donkey and the crow, and soon enough, the donkey found himself pleading a very different case for the auxiliary paddock to the farmer.

"You see, Mr. Farmer, we donkeys really do have enough grass on which to graze. With respect to the overall stability of the farm, I think it is most prudent to repurpose the auxiliary paddock into a pond of beautiful, crystal clear water in order to increase the fish population as I know you and the Mrs. sure are fond of seafood."

Back among his constituents, the donkey, hat in hand, apologized for his failures claiming that competing interests offered a better argument to the farmer. He told his fellow donkeys he fought his best, but the farmer simply didn't agree with him. Fortunately for the donkey, his overstuffed belly more than compensated for his lack of face. The herd of donkeys, emaciated and despondent, licked their wounds and re-elected the same donkey as representative next season because (as one donkey was herd saying at the exit poll), "at least he is a donkey and not a mule like that other animal running for office."

MORAL: That donkey representing you is really just a self-serving ass. (Elephants are full of crap too.)

Love it Dan. No way in hell my 3 year old would like though haha. Maybe about 2-3 more years.

“Are you a democrat or replublican?” said the ass.

“Me? Oh sir I’m no politician, just a humble citizen of the U.S.A.” said someone incredibly brilliant.

I test all of my products out on my 6 year old, I haven't completely destroyed him...yet.

Yes! I look forward to the day when people completely divorce themselves from all party affiliations, soon!!!!

Hehe awesome story and I think this could work for a kids story as well, considered an a bit childish and that I really enjoyed it ! Are you a writer by profession?

Thanks again @dandesign86 :) Nope, writing doesn't pay the bills, just a long standing hobby of mine.

Congratulations @danielshortell! You have completed some achievement on Steemit and have been rewarded with new badge(s) :

With due respect with your great piece, this post is NOT for KIDS but to the people hungry for success like us though just dwelling in a fair battleground. I love the way you do the analogy of these animals portraying different kinds of people you see in the real world! Keep it up man. So is this the kind of mind-twitching fiction you are going to post? Definitely worth following. Hats off!

Thanks @fycee! It's always great to receive feedback on the work you put on there in the world :) Upvotes are well, appreciated for sure, but, comments are loved :) :) :) Take care bud

I know how it feels to be a somebody treated like a nobody when you stepped into a new world trying to fit-in and eventually the enthusiasm level being tapped by like-minded people. It just feels great! Nobody will give side-by-side support than fellow minnows like us. The whales wandering around here are already established but then still feed themselves with our support.

Yep, that's how it goes around here. I guess the great hope is that you will stumble upon content that you enjoy consuming, AND people that like the stuff you produce will stop by and roost from time to time. Personally, I've no interest/plans of accumulating some Steem fortune...I just think this is a nice platform to publish my work for a few eyes to see, without having to use the big corporate-controlled platforms :)

That's the really best way to do steemit, then just let yourself amazed after a few months of the monetary rewards.