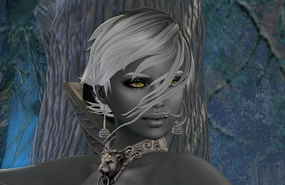 In spite of the council’s explicit decision that no human be killed on such excursions, Shraelin hesitated for only a moment with her bow string drawn, her sharp golden eyes fixed on a target she intended to take down. Her loyalties to the tribe had always been strong, and she was not someone inclined to disobey the wishes of her people, at least when it came to matters of the living Earth, but the last time she saw this man, nearly fifteen years ago, she had sworn an oath that she would not let him survive another day if she ever saw him again. She only hoped the council would understand the circumstances surrounding her decision, and grant her the kind of mercy that she herself would deny to the individual before her.

This man who stood unknowingly at the end of his mortal life was stout and of average height, with curly red hair and a roughly kept beard. Behind his placid features emanated an unmistakable desire to inflict pain, and this face had found its way relentlessly into her dreams for over a decade. Though he had noticeably aged since their last encounter, he was dressed much as she remembered him, in the customary hardened leather armor and chain mail of the crown, and he was loosely holding the reins of his horse with a gloved hand. Accompanied by three other men similarly attired, who remained mounted, each bore the emblem of King Lannar, a blue dragon emblazoned on a white linen tunic, an image which had become increasingly well known and hated in recent years in the lands east of the Thrae Anorian River. The soldiers had arranged themselves menacingly into a semicircle around the open entryway of a mud hut, where the peasant owner, a thin man in his late forties by the name of Eiron, was standing nervously.

Concealed with her own companions in a thicket of ghost berry shrubs and fir trees, Shraelin saw the fear deepening in Eiron’s features as he clasped one hand around his cracked lips. Fear was something she knew well. Having endured the brutal assault of King Lannar’s men that left her sister dead and the sacred Stones of Ahedroth stolen, the forest for her had transformed from a welcome sun dappled contrast to her usual life below ground, to a place of imagined threats, threats invariably clothed in the attire of the royal army, which had once again come into her view. This time, however, she would be the one doing the hunting. The rising tones from the man whose face she could never forget indicated the rapidly escalating potential for the use of force, as he replaced a parchment document from his saddlebags from which he had read aloud a slew of official decrees, glancing knowingly at his mounted entourage.

The red haired soldier had apparently arisen in stature to acquire some degree of rank within the King’s army, and Shraelin witnessed again in him an imperiousness that had only concentrated with time. She caught the word “handmill” as he used legalistic verbiage of the human tongue, and the look on Eiron’s face appeared to be one of a feebly disguised guilt. Though she did not pity the peasant, who to her was just another human settler expanding beyond the edges of their territory into her domain, she knew that these armored men would be inside his home in short order, and she wanted to deny them the pleasure that they would derive from whatever destruction they were about to do.

Perhaps if Shraelin had been slower to act, her companions would have had time to protest. They had all been present at the council meeting a few days before, and had received the same instructions. The four trainees might have ultimately deferred to Shraelin’s authority, communicating dissent only through a silent discomfort, but her friend Halarim who was crouched beside her would have certainly spoken out and redirected the situation if there had been time. Shraelin couldn’t give him that opportunity. As quickly as she had set it upon the string, she loosed the arrow whose tip glowed subtly with a magic drawn from the stars and which cleaved effortlessly through the steel rings of the coif that protected the stout man’s head and neck. Though Halarim was as surprised by the strike as King Lannar’s soldiers, in that instant, his training took over. By the time the trainees had nocked their own arrows, he had shot two of the remaining soldiers, who slumped to the ground. The third had been bucked from his saddle by a startled horse, and lay dazed and groaning.

As Shraelin sprang from the brush toward her fallen target, Halarim was close behind, shouting at the trainees to round up the horses. Having left behind his bow, he swung the blunt end of his ax against the back of the thrown soldier’s neck and stepped away to watch him die. He turned to look at Shraelin just in time to catch her spitting on the body of her adversary.

“That was for you sister,” she whispered.

The look of anger Halarim shot at Shraelin was lost neither upon her nor the trainees who had successfully gathered together the horses, but she ignored it and instead nodded toward Eiron, who had backed into the doorway in a state of shock to watch the scene unfold. “It seems we have a wanted man, here,” Shraelin announced as she took a half step toward him.

“You folks are elves,” he blurted out, though his wavering voice sounded more like a question than a statement.

“Dark elves, as your kind would have it,” Shraelin answered him, narrowing her eyes. “So tell me about this handmill. What were Lannar’s men after?”

Eiron turned his head slightly to the side, as if to seek the input of someone else within the hut, and Shraelin caught his hesitation. “You think this king of yours is worth dying for?” she asked, adjusting her grip on her bow. “Seems to me he would have had no problem killing you and whoever else you’ve got in there with you.”

Eiron wiped his hands on his trousers and looked around for a second time as Halarim quietly instructed the trainees to tie the horses up somewhere out of sight and then scout the area for any sign of approach. “Perhaps we should go inside,” Shraelin insisted, turning briefly to recover her arrow. As the two approached, the peasant man demurred and allowed them entrance.

The dirt floored hut was nearly empty of any furnishings, with only a small fire pit in the center and two simple benches. The door was nothing more than a wool curtain hanging from a smoothed wooden rod that jutted out of the mud plastered walls within the entryway. A small secondary room was partially visible through an open doorway to the left. Eiron shakily gestured for the elves to sit, but Shraelin shook her head.

“We don’t have a lot of time here, and I’d imagine the sooner we leave, the quicker your mind will be put at ease.” The man was not at all comforted, so she added, “You may want to inform the local magistrate, after we’ve all said our goodbyes here of course, that when out on a walk to see a neighbor, your friendly sword wielding visitors must have been attacked by elves. I doubt anyone would believe you could have taken down four armed knights. No need to lie. They just don’t need to know about our conversation, understood? Now about the handmill.”

“Well, the handmill is what we use for grinding wheat,” Eiron haltingly answered. “Lord Felmor requires us to use his mill up the way, from which he takes a cut of the flour. We can’t afford the tax, barely having enough to eat ourselves. So we use the handmills to keep him from knowing what all we’ve got. We take a small amount of wheat berries up there to the mill to prevent suspicion, of course, but we keep what we can out of sight.”

“Word got out, though, and so they’re coming after our mills.”

“But those were the king’s soldiers, were they not?” Halarim interjected. The tall, silver haired elf had a skin tone a shade darker than the rest of his traveling companions, nearly as black as pitch. The contrast between his complexion and his teeth and the whites of his eyes were more than a little unnerving to those who lived outside the bounds of elven territory. “You said it was Lord Felmor’s mill, so why didn’t he send his own men?”

“You’re right about that. I’m not certain why the king would send his men out to break our mills, what with the war going on. Seems like his hands would be tied at the moment.”

“Maybe they were here for other reasons, and thought they’d take care of some side business,” Halarim mused.

“It’s possible. They say the king does owe Felmor some favors.”

Shraelin swallowed her contempt, thanked the man for his input, and then asked his name. After exchanging introductions, she added coldly, “It seems you and your people have a problem with the leadership. I’m not sure how you’re supposed to farm if you yourself can’t eat. We treat our people with respect, when the land is respected. We know that your people have made incursions onto our land. Treaties were made. Lines were drawn in good faith, and those lines are now being ignored. We do not take lightly to trespass, even if done by lowly serfs hunting for food. Do you understand?”

“But through the proper channels, allowances can also be made,” Shraelin continued. “To that end, your assistance, should we need it, could be mutually beneficial. We may be sending someone to check up on how your situation is progressing. Let your fallen enemies who now lie at your doorstep, who once called themselves your betters, be an indication of how we treat those who cross us.” With that, the two elves strode out the door and rejoined the trainees. After releasing the horses, they traveled over twenty miles on foot through field and forest before setting camp for the night. No fire was lit, and the elves relied upon their keen vision to keep watch. Halarim hadn’t said a word since they departed Eiron’s residence, but once the trainees had gone to sleep, he pulled Shraelin aside.

“What in the name of Ordaroth were you thinking, earlier Shraelin?” he demanded. “What you did back there was exactly what we were ordered not to do.”

“I was thinking,” she paused. “I was thinking that my sister deserved better than what she got,” she replied. “But at least she got justice. And the Earth will now purify that man’s foul remains.”

“The council will not be happy with what happened today. With Lannar’s high priests coming into their own, and the demand for timber for his warships at an all time high, the fate of the southern forests is at stake.”

“You don’t seem to have much faith in our archers, Halarim. Did we not demonstrate the weakness of their chain mail today?”

“The council has executed people for less than what you did, Shraelin. Far less.”

“I know,” she sighed. “We have more work to do. But I will face them upon my return.”

Halarim laced his fingers behind his head and looked up at the darkened sky filled with the tiny flickering lights of the ancient ones. He followed the point of Cerendron across a stretch of black to rest his gaze on legendary sage and healer Vaelenberoth, whose blessings, it was said, could pass through their recipients for three generations. My return. He repeated in his mind. Not our return. What could she be planning?

In just one post you created a whole new complex world. Kudos

Thanks. Glad you enjoyed it.