As I mentioned in my first post on this subject, before moving to Australia I had never heard about the stolen generations of aboriginal children. In fact I've had to do a bit of research to get more details on it. 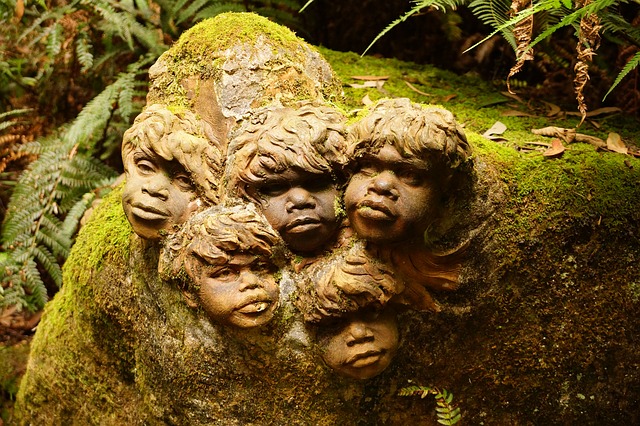 Between 1910 and 1970, approximately, government officials removed “half-caste” indeginous children from their parents in order to assimilate them into the “civilised” white society. The aboriginal people were seen as a dying race and it was believed it would be easier for mixed blood children to be integrated. They thought that they could be raised like the whites and marry whites, eventually breeding them out as a race.

Some were adopted by white families, but most were raised in institutions. They were made to reject their culture, often made to feel humiliated by it and they weren't allowed to speak their languages. Abuse and mistreatment was rife and the attempt to assimilate them was a complete failure as the whites wouldn't accept them.

When they started forcibly removing these children from their parents, they broke the family cycle for them. The children grew up often traumatised and disconnected, with no idea how a family should be, going on to raise children who became equally disconnected. Within many broken indigenous communities abuse and addiction is high and children are still being removed at increasing rates.

The removal of the children is entangled with a host of other issues, racial included, but I feel that this site offers a better coverage of that then I could: https://www.creativespirits.info/aboriginalculture/politics/a-guide-to-australias-stolen-generations

This is a horrific example of how interference has created a downward spiral that is now self perpetuating, leading to more and more intervention. Yet rather than learning from this government bodies continue to intervene and interfere with families. That's not to say that intervention isn't sometimes needed, but something is seriously going wrong and these sorts of things continue to happen.

All SBD raised from this post will go to @familyprotection.

Unbelievable what human beings are capable of. We tell ourselves so many lies so that we can sleep at night. We join groups with others so we can all fit under a banner of being moraly right. When others say the same as us we start to believe that we are right. We destroy lives, cultures, races of people and the land we live on telling ourselves we know best. We cause untold damage wherever we step, but its ok because the organisation we work for will back us up.

I often wonder why we feel the need to enforce our beliefs and ways of life upon others.

$0.00
Reply
[-]
geopolis (54) 4 years ago
Your post has been personally reviewed and was considered to be a well written article about history!
You received a 10.0% upvote since you are not yet a member of geopolis.
To read more about us and what we do, click here.
https://steemit.com/geopolis/@geopolis/geopolis-the-community-for-global-sciences-update-2-higher-base-votes-new-logo
If you do not want us to upvote and comment on your posts concerning earth and earth sciences, please reply stop to this comment and we will no longer bother you with our love ❤️
$0.33
2 votes
Reply
[-]
nihan (-2)(1) 4 years ago

So awful, i didn't know about this! in the US they did the same to natives using different means but forcing them to assimilate in horrific ways. It will take generations from the children and decendents to heal, it's heartbreaking.

When people first came to settle South Australia they were under orders not to disrupt the indigenous way of life after what happened in the US and probably elsewhere in Australia. Sadly, those orders were ignored.

I've been to australia and heard about this, thanks for bringing here on steemit, familyprotection is doing a great job in awareness of the quiet ones.

This is shocking!
Today is Australia's invasion day, how can this still be a national holiday?!
Its time aboriginal people were able to govern themselves, have their birth right, land and culture back!
If you or and anyone else is interested in changing themselves and the world,
please join the FOOD REVOLUTION!
check my intro out....
https://steemit.com/introduceyourself/@celestialcow/hi-steemit-i-m-celestial-cow-fully-plant-powered-food-anarchist-and-diet-revolutionist-excited-to-be-here
I just joined steemit, follow and I follow back and upvote

Australia was invaded way before captain Cook officially claimed it. A celebration doesn't have to be demonized and many are moving towards celebrating it as a day for all Australia, it's land and it's original people. I like that. Rather than taking away the celebration, it evolves to a celebration of love and inclusion. The original people have so much they can teach us if we can help them to preserve their way of life. Sadly many tribes have been lost or have lost their way of life.

I hope that by sharing these atrocities we can approach things from a position of awareness. We can't change the past, but we can look towards making a more positive future.

Welcome to Steemit, it's wonderful to have such a diversity of people and ways of life.

Thank you for this thought provoking response. I spent a few months working in a outback hotel in western Australia. To be honest I was quite shocked, I felt like I had gone back in time. It is completely racist lifestyle, the 1st nation people are put at a disadvantage, living in a way thats Not their choice. Whilst rich white men can plunder the earth resources for gold and taunt the people not like them.
Thanks for the welcome and the info!

We're from the UK originally, so we had a similar culture shock. One Aussie I met described fitting in as needing to be inappropriately racist. It was tongue in cheek, but it does seem rather accurate. The urban areas are a bit better though so one would hope that we are slowly evolving.

Hmm...one of the richest people in Australia at the moment is mining magnate Gina Rinehart.

Thank you for sharing. <3

I was well aware of what had been done in the Carlisle schools in the United States, but it wasn't until I saw the film Rabbit-Proof Fence that I realized it was happening in Australia, too. It is heart breaking to see what has been done in indigenous communities around the world, with all the ancient knowledge that has been lost and all the families that were ripped apart along the way.

Where is that sculpture that you showed in the photo? It's such a terribly sad and appropriate way to represent this issue.

I'm not certain where the sculpture is. The photo is from Pixabay and one of the tags is national park. However, I think it could be from William Ricketts Sanctuary.

Hello @life-relearnt I am a kiwi expat living in Brisbane and was very disturbed to learn about this shocking history myself. I find the unjust and inhumane treatment of one race to another appalling. It is just so hard to fathom the intent of one’s heart (which, simply put is evil) to ignore the pain and suffering of those they inflict that evil upon. Some people (not races) have an awful lot to answer for and I do wonder at how judgement is metered out to the perpetrators, if not in this life but the next. The consequences of their actions are imbedded into lives for generations. I haven’t seen those carvings before. Can you tell me where they are located. Thank you for sharing this article. The world needs to be enlightened and challenged.

I'm not sure where the carving is located, the photo is from pixabay. I think it might be from William Ricketts Sanctuary.

Oh, thanks for that. I think it tells quite a story and the sculpturing is very impressive. Happy Australia Day!

Helloo @life-relearnt
Me, @writing history #writing history
I see articles and photos on your post, have a historical and cultural value of an area. This post is certainly very interesting to add insight in the field of history.
If you do not mind, I will resteem this post in my account. thanks.
Date: January, 24, 2018

The eugenics program was absolutely shameful. Unfortunately, there is still little that has been done.

Did you know that South Africa's apartheid laws were based upon Queensland laws regarding the aboriginals?

I didnt. I've only recently heard the full extent of the apartheid from a South African woman here. I was gobsmacked. Unfortunately now that it has ended there isn't an end to the problems. The blacks resentment has turned on the whites and many have left the country. They have taken over the farms, but have no idea how to run them and I suspect no one to teach them. Another case where western interference has just led to a compounding of problems.

The same happened with the farmers in Zimbabwe now they are a failed state with rampant inflation and no production. They are pleading for white farmers to return.

The same was done, and is still low-key being done, to the natives here in North America. It is shameful and disgusting. Thank you for talking about it. Not enough people do.

I can imagine. It's bound to be carrying on low key now, because they are fully aware it's not going to be accepted as easily as it was by the majority. I believe what they learn from these things is how to keep it quiet better.

That is so horrible what those children had to go through. I thank you for your article.

Congratulations @life-relearnt! You have completed some achievement on Steemit and have been rewarded with new badge(s) :

Congratulations @life-relearnt, this post is the ninth most rewarded post (based on pending payouts) in the last 12 hours written by a Dust account holder (accounts that hold between 0 and 0.01 Mega Vests). The total number of posts by Dust account holders during this period was 14896 and the total pending payments to posts in this category was $4836.35. To see the full list of highest paid posts across all accounts categories, click here.