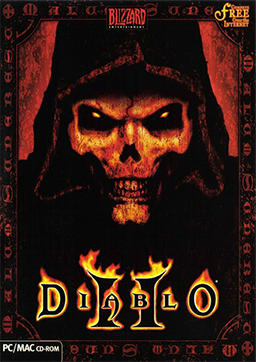 Background Story on the whole thing : (don't need to read if you cba just move on to the review after this paragraph)

Since my childhood, I've always been into computer games, whether they were fps's like quake
(back in the day), or counter strike 1.6. But when i started observing other people play games,
I noticed how there were more than just 1 genre of a game and I investigated and found out there were countless amounts.
Upon discovering this fact of course I proceeded to try them out, so i first stumbled upon the RPG's,
and what a wonderful gift it had for me.
When at the age of 15 i first recieved a copy of the Diablo 2 + Lord of Destruction box set i was thrilled.
I've played this game not really understanding what it's about but it brought me pleasure playing it,
it felt different from the rest.
This is why i want to share an honest opinion of what i think about this wonderful
game that was produced more than 10 years ago but in my opinion is still one hell of a good rpg nowadays. When I first attempt to enter the world of diablo 2, I encounter a hero selection, where I am able to
choose between different classes both with unique skills, unique skill trees and unique atributes.
First left me stunned with the sheer amount of possiblities, i.e. Do i choose a sorccerer, if i do, do i max out
a fire build sorc or a light/cold sorc. Which build has highest dps for bosses etc..
However quickly i decided to proceed and choose a sorccerer with a lightning based build.

When I first entered this game I had somewhat of a clue what this is about, however nothing too specific,
when i first entered in single player mode I've encountred easily some of the most unappealing graphics
that i have seen recently, which kind of put me off (at that time),
and so I decided not to judge it just based on graphics as this would be utterly stupid.

So i got on with the story and unlocked the first main mission, keeping in mind that there are 5 arc's in the game,
of which an arc consits of 6 main quests (generally except the 4th arc which only has 3). Anyways i steadily go across the game
and get out of the village when i encounter some goblins which at first I had farmed while looking for the 'den of the evil'
which would of allowed me to complete the first quest once i cleared it, problem i found was that, i'd ran into a completely different
place where i was supposed to do a completly different quest while looking for the den which is kind of weird as it's the first
main mission it should be much easier to follow, maybe perhaps even a tutorial on the very basic mechanics in the game, as there
is one hotkey guide but I found it barely useful at first.

I found the main story very intruging and intresting with each arc, as we are intruduced to a new 'clue cutscene' everytime we
clear an arc, this cutscene usually reveals a clue about the whole story and the events that unfolded in the past many years
back which lead up to your main 'boss' to kill or the villain of the next arc. This overall effect is very nice as it
pieces together the story as a whole to where after you clear arc 4 you pretty much know everything and are revealed to the main
villain of the story the one which you will slay and become a hero in the diablo 2 universe. 9/10

The soundtrack consits of very 'Dark toned', Horror-ish type feel music which really gets to you as you move along
the map, which gives you really scared-like feeling that keeps you on the edge when fighting creatures or moving through
dungeouns. It fits the general setting and mood of the game so perfectly and is so well composed that it really adds a whole
new level of horror into the game itself. 10/10

So at first I was finding myself struggling throught the entirety of diablo 2, new unknown creatures came out every region, new
bosses started to be encountered and new harder missions needed to be cleared. Overall this made it very hard for me to accomplish
anything without at least dedicating a good hour learning some tips and tricks on fighting certain bosses, tips and tricks in general
and mechanics that help me with them. This game is by no means a pushover it will force you to think everything you do through,
whether the boss is shooting a lazer beam that follow you and you have to dodge or it will 1 shot you, or if the boss attacks you
with poison attacks that bring your hp down slowly to about 10% hp, if you don't dodge the projectile etc.
In terms of the overall difficulty the absolute begginers to rpg's will struggle with this diablo as it dosen't offer too much in game
guiadence to make you be able to easily pass it even on the easiest difficulty 'normal' 6/10 in that respect. 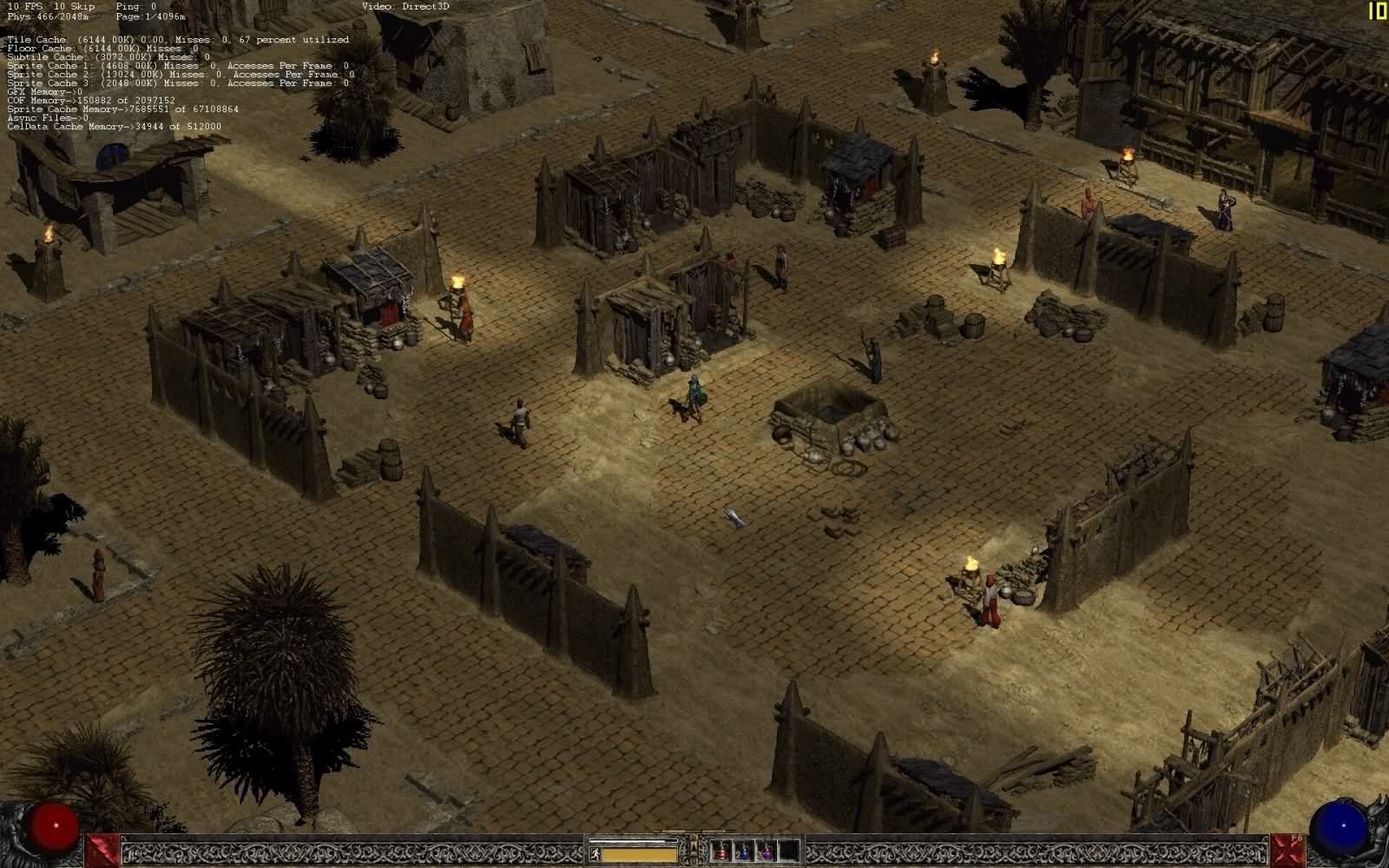 Well to say it bluntly, the graphics aren't that great in this game for modern days, however back in the day when diablo 2
was released they were outstanding, so instead of judging the graphics, i've decided to judge this by the map, scenery and
the designs for creatures etc. Which by the way, are completely amazing, the maps throught all 5 arcs look absolutely outstanding,
changing from many regions such as a desert into an amazon forest into a 'hell' map into an ice map which look absolutely stunning.
Another major point was the overally designs on the bosses and their minnions which to me seemed very rich in mythological history
despite the fact that the actual game dosen't suggest it, it holds a lot of mythology in it making each and every look very
unique to the point where it fits the general feel of the game perfectly because of it's creapiness. 9/10 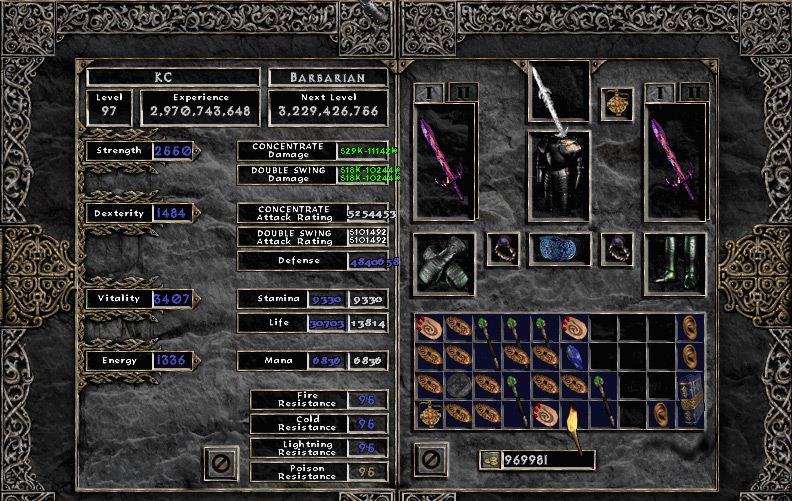 I found the characters to be some of the most well created RPG characters i have seen in a long time, each class offers very
unique abilities which look absolutely amazing in what they do for example an arc lighting sorccere's, boucing lighting to surrounding
monster's with a cool effect. There are class specific items which make it fair so that a barbarian can't wear an amazon's bow
because then there would be no point to classes themselves in terms of items. Another key and fasicinating feature i found was the
skill trees which can upgrade the skills you already have or be used to make an even better skill out of your old one. Very useful
for later bosses. These vary so much and are so flexiable as you can pretty much only max 1/3 of them at max level which means
there are so many possiblities and so many option you have to make different 'builds' from just 1 class. For e.g the sorcceres which
can have fire/lighting or cold as her main skill trees. Overall this is superbly well thought out and is one of diablo's greatest
strenght's 10/10

Finally my full enjoyment of the game varied a lot, as in begging stages i got really mad about things when i couldn't find them or
I was unable to accomplish killing a boss which was on 5% hp because i died first, which really annoyed me. Generally small things,
like this really make you angry because once you die, you have to go back to the same place from the city to kill that boss again that will
regenerate and be at 100% unless you know how to utilise the teleport mechanic. Without studying this game too much or investing your
time into playing it to really understand it you will not enjoy this game for sure, which is a great shame because this is a fantastic
game that needs you to invest your time into it to really understand it! 7.5/10 purely because of the research needed and time investment.

This is a wonderful RPG with, very well crafted game design, character's, soundtrack etc etc. It very well presents it's story
and I would fully reccomend it to anyone who has not gotten around to playing it yet!! The only downside is the difficulty and time
investment which is needed for research of the main game. Apart from that it is a very well deserving of your time.

Great article. Upvoted and resteemed.
Can you do Warcraft III next. I totally loved the story. The hero mechanic was really great. Great variety of gameplay. My favorite parts were the solo missions. With the hero mechanic, going solo was really fun and I loved the discovery.

It was a long time ago. I remember playing the extra/bonus missions in the Frozen Throne with Rexxar. It was personally the best and most fun part for me in Warcraft III.

BTW are you into anime? If so check this out:
Anime Studio Spotlight
https://steemit.com/anime/@durzo/my-anime-recommendation-to-you
Fate/Zero

Thank you for encouragment man, sure i'll cover Warcraft 3, used to be play the mods so often when i was like 15, was a super fun game, played the entire campaign as well. I will most likely release the Wc3 + frozen throne game review somewhere around saturday sunday, takes a while to write up but expect it somewhere then man. Thanks for the positive comments it's a great encouragment to me as i only started steemit not long ago!

I only started a month before you. Steemit is a better community than any other social media. I've written about Silent Hill 2, Fate/Zero and Anime Studios
I've also posted Zen quotes and about Authors/philosophers I love

Hi, lanaya! I just resteemed your post!
I am a new, simple to use and cheap resteeming bot.
If you want to know more about me, read my introduction post.
Good Luck!