The process of making a monogram 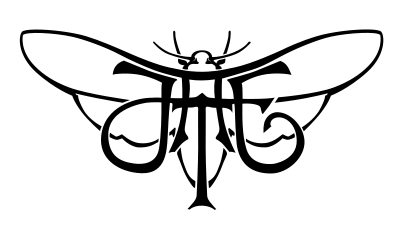 The post I made three days ago about the logo for @evilhippie's and my Madsted Knife, made me think of another thing in the same category that I could show you. I have for some time made monograms for special customers that was willing to pay 600 € for the service. Normally, the price considered, I never have published or showcased any of them as I feel they belong to the person who ordered them. But there was this one guy who ordered and never paid, so I have no scruples showing you that or the process involved.

The letters I had to use was J-A-T-E and the person who ordered it wanted to have the moth from Silence of the Lambs to be included. After having seen some font samples and some of the other monograms I made he decided that he wanted it to be in the style called skønvirke, a sort of Danish art noveau, best known from the Carlsberg Beer logo. Image from the film Silence of the Lambs - found on www.verbicidemagazine.com, but probably copyright of Orion Pictures or one of the other production companies

I normally use a cheap Chinese sketchbook that I carry with me when I have waiting time - like my daughters dance class. I use it for all kinds of things, Phill from GCHQ-sketching for example - and when I made this monogram I did it mainly on the dancing school. 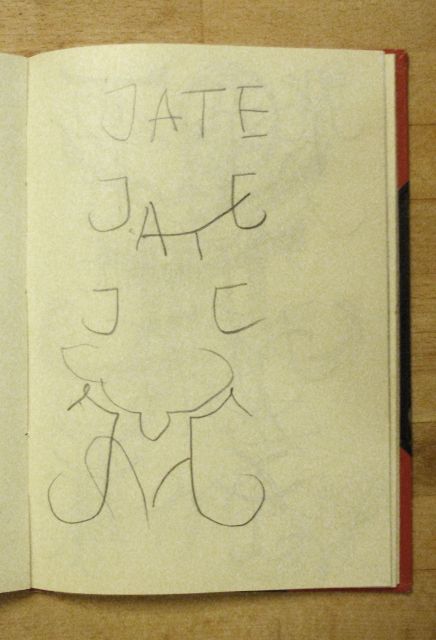 The first doodles where I try to see the way the letters can be combined in a clever way. It does not really look like much and I have a few other pages that I did not want to bore you with, but it is important, maybe the most important step in the whole process. As you can see I got the idea to mirror the J and the E in the bottom scribbling. Then a lot of different ways I could use that idea. The T is now incorporated between the two letters, while the A is hanging above and the moth is on top like a crown. 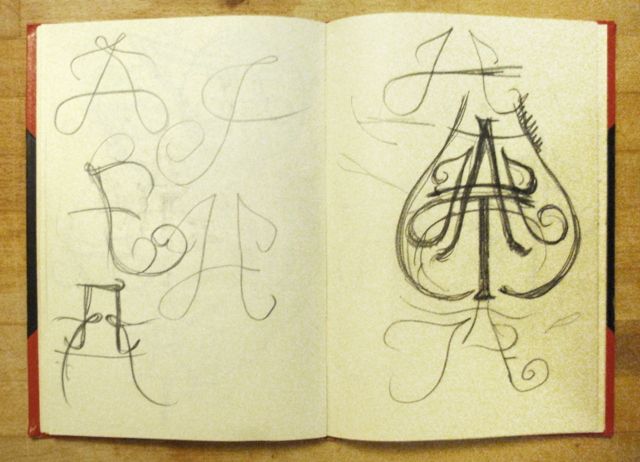 When the T, a letter that is symmetric on the vertical axis , can be used then the A should be used the same way as it has that same property. I think this was the second dance lesson. Here I seemed to get it right. 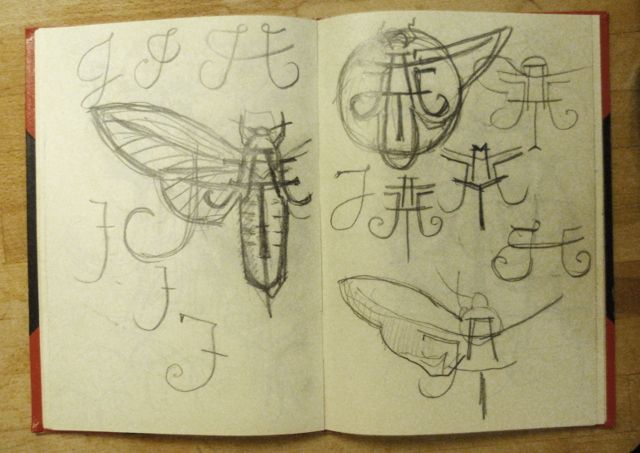 Then the moth had to be introduced. As you can see I still have many alternative ways to set up the letters that has to be examined. But the large drawings are very close to the final design.

I do not make a finished pencil sketch, but move directly to the inking process. As I use my Wacom Cintiq I will have endless opportunity to erase and experiment so I make a lot of the actual design in this stage. Sadly I do not have any stages just the finished drawing. Many decisions have been made about curves, thickness etc. This and the next stage is the most time consuming.

Making it a vector image

The last stage is one long session with me making the subtlest changes to make the lines work like I want them to. It takes forever and my crippling perfectionism really gets its way - but hey 600 € is a lot of money for a SVG file. 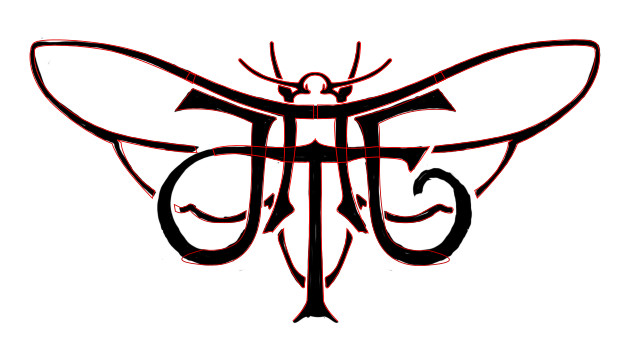 The process of moving the bitmap drawing to vector is hard to illustrate, but here you can see how I draw the lines and mirror them for a perfect balance. There is here even more corrections to the lines, and even now when I look at the finished piece I can't help suddenly wonder: *"should I have made that line thicker, that curve more curved?"

And finally the finished piece. Sadly the dude that ordered it had a lot of personal problems and never paid me. So here it is for your viewing pleasure.

Awesome art. Very entertaining to watch how you create. The end result does not show all the effort that the Creator puts in his creation. This is truly a complex process requiring skills and talent

Thanks and yes, it should look effortless, but it never is.

i think this should be categorised to #hack
cause i just found out an easy way to draw objects using letters. :-)

Fascinating - love to see artist's processes like this. When I used to draw, let's just say my process was quite less sophisticated and well-thought out. I doodled ;)

I like to see how other craftmen work too. As Jerome K. Jerome said: "I like work: it fascinates me. I can sit and look at it for hours."

That's pretty cool to know thanks for the tips by the way :)