What Happens in an Internet Minute Since 2013. In Search of True Data...

I love numbers and I love statistics, the more I love accurate numbers and accurate statistics. Especially when it is used to things, that surround us every day. Even better when the final result is presented in the form of infographics- one of the most convenient, enjoyable and easy method to perceive the data.

One of my favorite infographics in recent years is ”what happens in an internet minute”. There are many sources of such information, but the most popular (according to the search results in Google) and informative are Domo (Data Never Sleeps) and Excelacom What happens in an internet minute?). It's great that these projects publish such data every year. It allows to visually evaluate how quickly grow the different services and the Internet in General.

From 2013 to 2017 the number of Internet users grew from 2.1 billion people to 3.7 billion. It is not surprising that most of the content generated on social networks. That's why they get into the charts every year, but sometimes change their criteria of assessment. 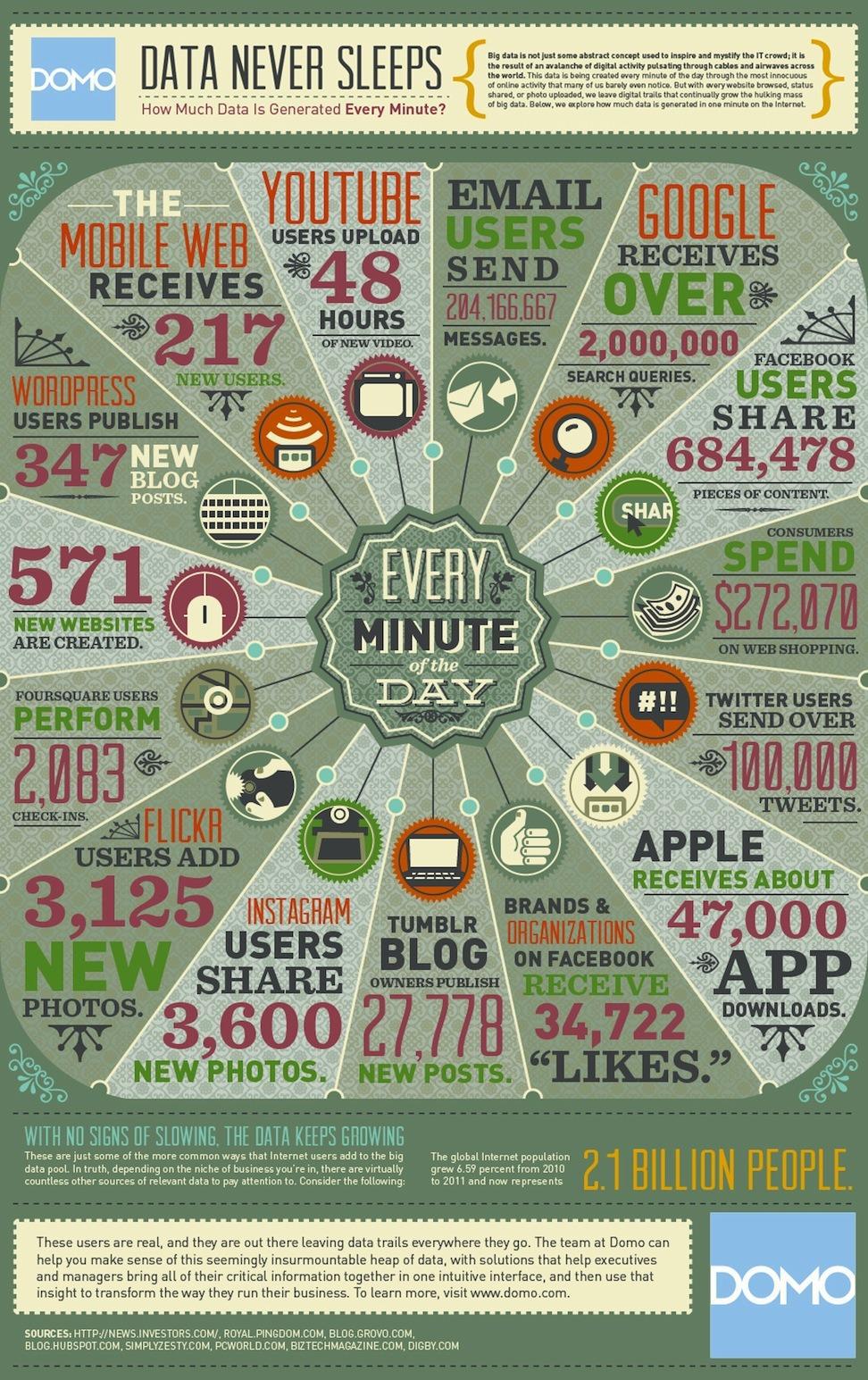 Domo began to publish statistics two years earlier than Excelacom. You can see information about such platforms as Flikr and 4sq (we will not see them again). At the same time, there is no data on Tinder. Tinder was created in 2012, but the growth of its popularity occurred in 2014 +15% new users every week.

Because some services displace other, let's follow up on the major social networks and services: Excelacom still not entered the game, while Domo has quite significantly reshuffled the main participants. This is an example of how new services are changing the market: Vine, Pinterest and finally Tinder. In this graph, there are two serious errors... 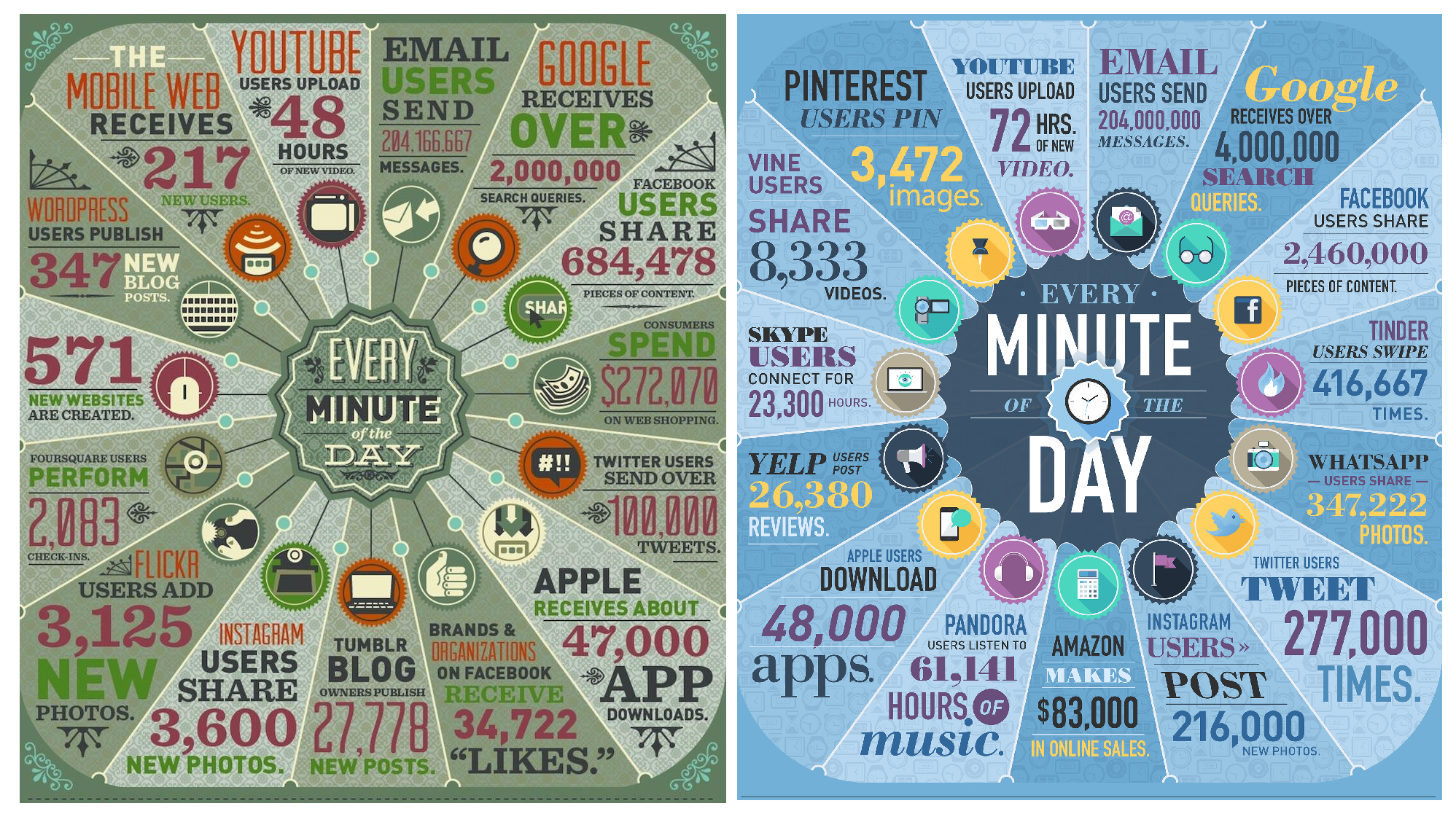 Well, now it's even harder to compare data, because Domo changed the assessment criteria even for regular participants. Now we got numbers of likes for Instagram and Facebook.

Infographics from Excelacom allows to fill in some gaps. But on the other hand it brings even more confusion... 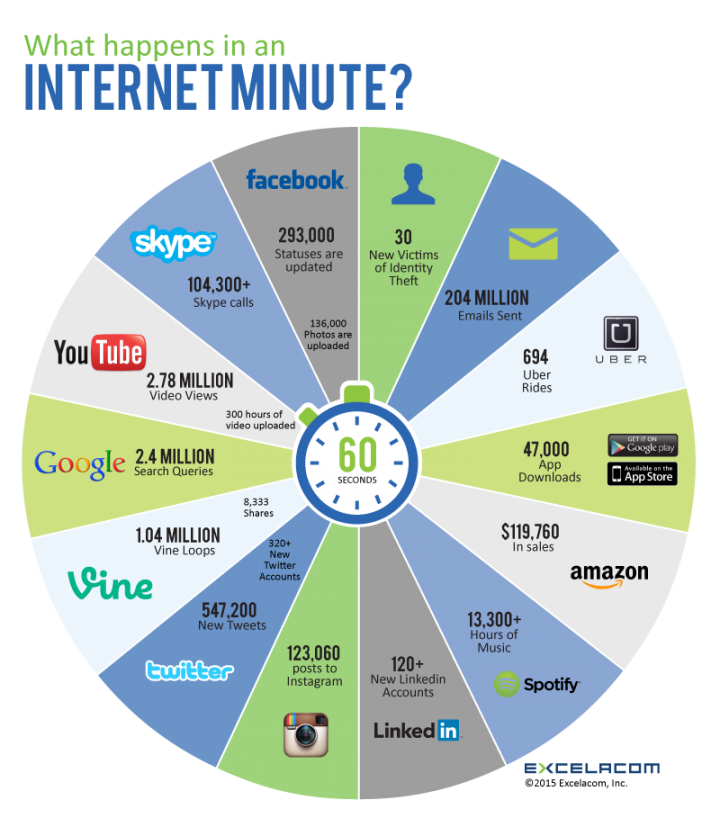 Honestly, at this stage, my brain began to boil a little. Too much data doesn't add up. But do not worry, we'll soon figure it all out. And Domo again changed the composition of participants and evaluation criteria. Maybe they noticed that several times made a serious mistake in past charts, so they decided to change the data type (in which they are not sure) for each new year. 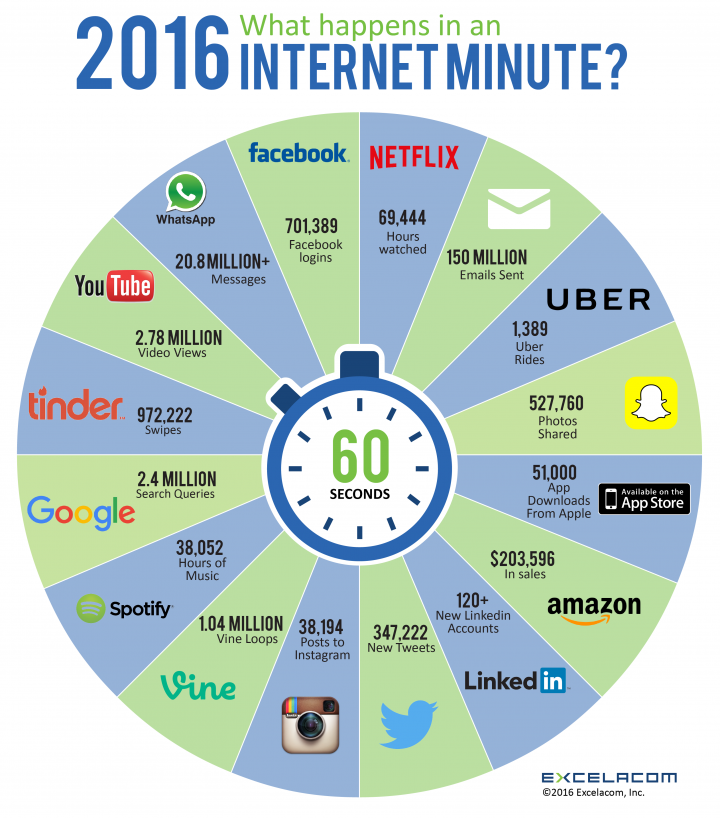 Excelacom decided not to change the data type and practically do not change the composition of the participants. It looks good... until you compare the results of the 2015 and 2016:

The numbers for major services (Instagram, Twitter, Email) have dropped significantly. How can it be, if global internet population increased by 200 million? Some of the data (Google, Vine and YouTube) remained unchanged, which also looks strange.

Perhaps, in this case, Domo chose a more correct strategy and looks more plausible. Anyway, let's try to evaluate the data in the format to which we are accustomed:

As we can see Excelacom presented wrong information in 2015 and made some mistakes in 2016. And we cannot compare Domos infographics.

Domo haven't published their infographic yet, while Excelacom did it back in March. 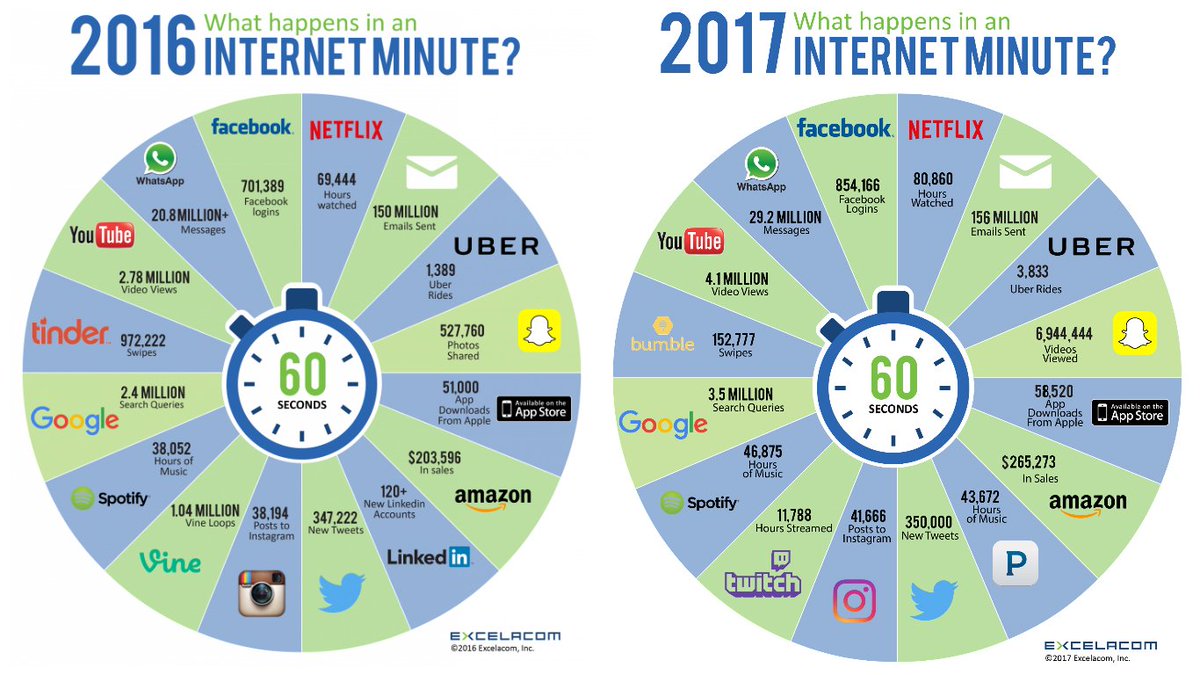 Well, in a sense, they are worthy of respect. Despite the blunders in the past, they do not change the data types and main participants. But now we can independently check whether these data are correct with internetlivestats.

Well, now we know where Excelacom takes data, at least in 2017. It is obvious that earlier they used a different sources, and continue to do it for such services as Twitter and Instagram.

Perhaps, the most accurate infographic in the period 2014-2016, made these guys: Unfortunately, as we see such graphics often contain false information, and it is impossible to assert that even internetlivestats provides accurate data. However, we can get a general idea of how the Internet community and social networks are growing rapidly. Let's hope that in 2018 we will see Steemit among the participants ;) 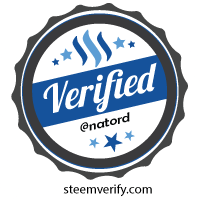 well written post liked your post. upvoted and followed my upvote is not very worthy as i have less steem power sorry for that mate.

Thank you for your support, my friend!

I love infographics. Very nice post, especially for the likes of me who likes facts and figures. Followed and upvoted. :-)