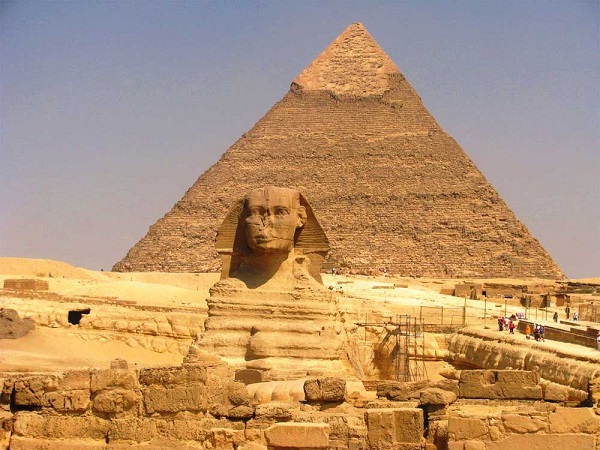 The Great Pyramid of Giza is one of the most remarkable engineering achievements in history, but researchers have found that the ancient structure is actually slightly hideous because of a mistake the builders made during construction about 4500 years ago. This mistake has led to the fact that the western side of the pyramid is slightly longer than the east, forming a base that is not perfectly square - although it looks so far away. The discovery was made in 2016 by researchers from the Glen Dash Foundation and the AERA (Ancient Egypt Research Associates) studying the magnificent construction to establish its original size.

When the pyramid was built 4500 years ago under Pharaoh Hufu, it is covered with white limestone. Over time, this outer limestone cladding has been removed - probably for other construction projects. Most of these cladding stones were removed centuries ago for building materials, leaving the pyramid as we see it today, without most of its original cladding The first step to understanding what the Great Pyramid was before the disappearance of this outer liner was to find the points around the pyramid, where the stones are located outside, looking for markings and exploring the foundation on which the pyramid is built. The team finds 84 such points that determine where the original edges are. These points were depicted on a network so that researchers could use a statistical method called linear regression analysis to calculate the length of each side. They find that the sides of the pyramid are between 230.295 - 230.373 meters, but the western side is between 230.378 - 230.436 meters, which means there is a difference of about 14.1 centimeters. The archaeologist and engineer Glen Dash discovers how the Egyptians have managed to align the monument almost perfectly in the four directions of the world (north, east, south and west) - they probably used the autumnal equinox. The builders of the Hufu Great Pyramid have straightened the huge monument to the geographic directions of the world with an accuracy of more than four arc minutes or a fifteenth of degrees. Shadows in Connecticut and Giza

In the experiment that Dash conducted in Connecticut on 22 September 2016 (the autumnal equinox day), he placed a stick (sometimes called a gnomon by modern geodesists) on a wooden platform and noted the location of the shadow of the stick throughout the day. During the equinox, the surveyor will find that the longest shadow is almost perfect east-west. The magnitude of the error is anticlockwise, similar to the error found in the Great Pyramid, the Hafre pyramid and the Red Pyramid. The inclined position of the Earth during the autumnal equinox allows the shadow to deviate from the east-west direction. Although the experiment was taking place in Connecticut, the technique should also work in Giza. In order for this technique to work, ancient Egyptians (or any surveyor) will ideally need a clear sunny day, as most of the days in Giza. The rod may have been placed on a wooden platform or on the ground in Giza. Egyptians could determine the day of the autumnal equinox as the number 91 days after the summer solstice. Did the ancient Egyptians really use this method?
The recent experiment shows that the autumnal equinox could be used to equalize the three pyramids, Dash explained. But whether the ancient Egyptians used this technique is unknown. Experiments conducted over the past few decades show that several different methods using the sun or stars could also be used to align the pyramids.

The ancient Egyptians did not leave records in which to tell which methods they used.

The Egyptians, unfortunately, left us with a few clues without any engineering documents or architectural plans to give technical explanations showing how the ancient Egyptians aligned their temples or pyramids. In fact, several methods of pyramid alignment may be used. The method of autumnal equinox has an advantage - relatively easy to use, other methods require more steps and are usually more complex, he says. It is difficult to imagine a method that could be simpler, either conceptually or in practice, than the method of the autumnal equinox

the wonders of the world, someday I would like to know them

Congratulations @daydreaming, this post is the ninth most rewarded post (based on pending payouts) in the last 12 hours written by a Newbie account holder (accounts that hold between 0.01 and 0.1 Mega Vests). The total number of posts by newbie account holders during this period was 5334 and the total pending payments to posts in this category was $3617.89. To see the full list of highest paid posts across all accounts categories, click here.

This post has received gratitude of 14.88% from @appreciator courtesy of @daydreaming!