penguinpablo (74) in cryptocurrency •  2 years ago

Welcome to my Cryptocurrencies Market Overview for Tuesday, February 20, 2018.

Today in the news: 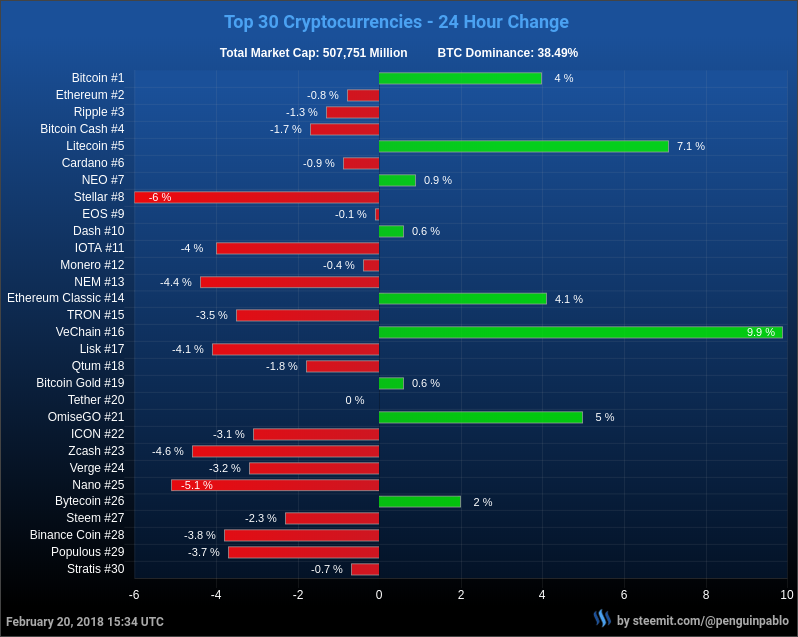 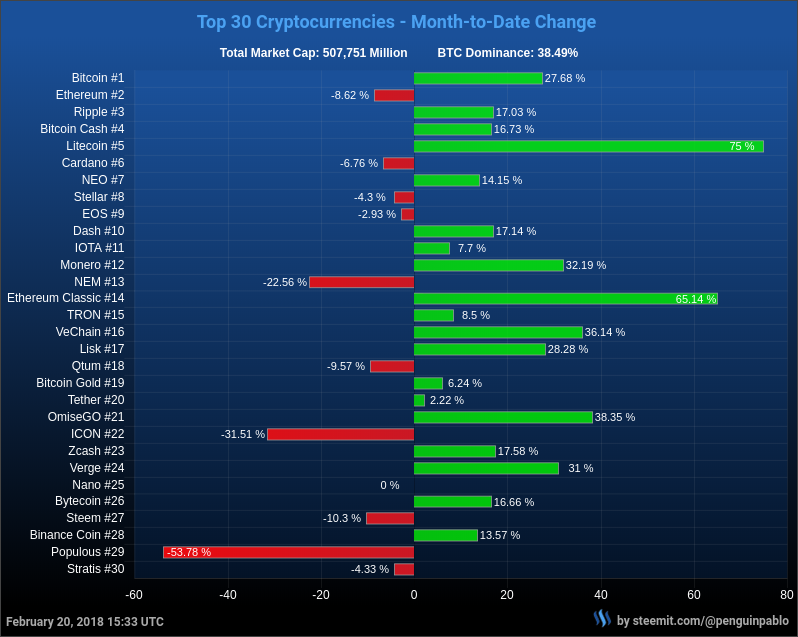 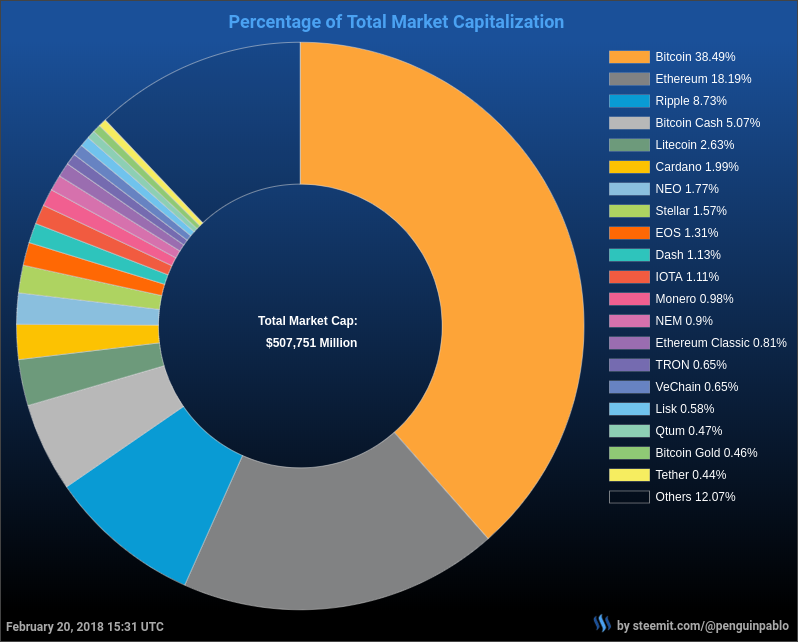 Feel free to use and share my charts, but please mention me as the author.

The cryptocurrency market cap briefly rose as high as $516.8 billion but has since receded to $507.9 billion. This represents a single-day increase of $7.2 billion and equates to an approximate advance of 1.4 percent.
Read more: www.ccn.com

The median daily transaction fee on the bitcoin network fell to $0.79 on Sunday, a six-month low. That represents a dramatic 97-percent decline from the peak of $34 reached on December 23. The median daily bitcoin transaction fee was more than $10 from mid-December until mid-January but has been declining steadily since then.
Read more: arstechnica.com

The head of South Korea’s financial regulator and watchdog has now confirmed the government will support cryptocurrency trading while encouraging banks to facilitate transactions with exchanges, effectively killing any fears of a rumored ban.
Read more: www.ccn.com

A new tax bill has been introduced in the Wyoming state senate on Feb. 16 that would exempt virtual currencies from state property taxation, and suggests an effective date be provided for the tax exemption implementation.
Read more: cointelegraph.com

The Venezuelan government has officially launched the pre-sale of its controversial "petro" token, according to a report.
Read more: www.coindesk.com

Cryptocurrency Regulator Found Dead at His Home in South Korea

South Korea has been a leading market for bitcoin over the last year or so in terms of adoption, trading volumes, and regulatory response. Now one of the top figures in the government associated with regulating cryptocurrency has passed away, with stress suspected to be a contributing cause.
Read more: news.bitcoin.com

Segregated Witness (SegWit) is special. And it's not just because the bitcoin code change is focused on scaling the network (it is), or that it paves the way for a new layer for the tech that's potentially faster and cheaper (it does).
Read more: www.coindesk.com

Vitalik Has a New Idea for ICOs – And It's Being Tested

Investors need more control over ICOs. At least, that's according to ethereum creator Vitalik Buterin. One of the early thinkers to shape the crypto funding mechanism concept, he hasn't quite put the idea aside, last month proposing it could be combined with a decentralized autonomous organization (DAO) to best allow investors to have a say in how money raised gets handled.
Read more: www.coindesk.com

Bank of England Governor Claims Bitcoin Has ‘Failed’ As A Currency

Bank of England (BoE) Governor Mark Carney declared that Bitcoin cannot be considered a legitimate currency by “traditional” definitions, The Telegraph reported Monday, Feb. 19. At an event at London’s Regent's University, Carney claimed that Bitcoin failed to meet two major requirements of a traditional currency, claiming that Bitcoin is neither a means of exchange, nor a store of value.
Read more: cointelegraph.com

Litecoin Heads Again for $250, Price Holds Even After the Fork

The price of Litecoin (LTC) held fast even after the hard fork was completed this weekend, making another shot for $250. Previously, investors believed the price would rise before Sunday, and drop after the fork, or just before it.
Read more: cryptovest.com 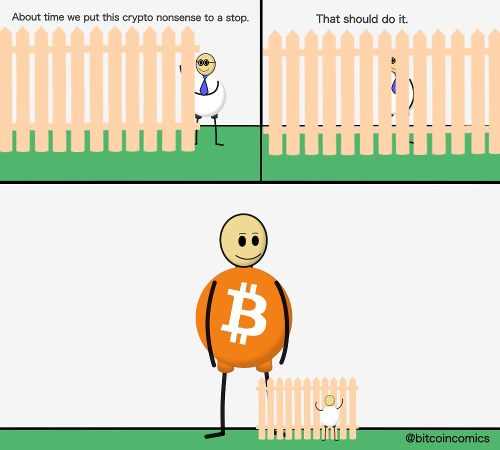 Submit
$50.31
153 votes
30
Authors get paid when people like you upvote their post.If you enjoyed what you read here, create your account today and start earning FREE STEEM!
Sort Order:
[-]
michiel (68)  ·  2 years ago

This week I dumped my last Bcash and 25% of my ETH and bought BTC, LTC and ETC. These coins are certainly rising on strong fundamentals!

The last image... Out of words!

I remember talking to my parents about crypto, they asked me if some millionaire guy can't take them down by trading and speculating with them. I replied to them that the so called millionaire does not have enough money to move with just a few percents the market. The last image reminds me of that discussion.

@penguinpablo - This is all from your website? - https://CoinMarkets.today Wow! You have a very nice website! What is your intended audience? How can they use it other than looking at the charts - which may or may not be interesting to view on a daily basis?

wow my friend @penguinpablo, what I was looking for the latest news about cryptocurrencies and that it is from someone of excellent reputation! I really liked your post, very well designed and easy to understand, I will follow you. please keep posting content is great :)

Thanks for knowing about this.jope everyone will be benefited on this post.keep sharing.thank you.go on

🐒 No Trade Today Stay In Cash using this system
The Bitcoin price is from the Coinbase trading platform GDAX .

This is actually an essay.

The cryptocurrency market cap briefly rose as high as $516.8 billion but has since receded to $507.9 billion. This represents a single-day increase of $7.2 billion and equates to an approximate advance of 1.4 percent.

Thanks for the info @penguinpablo hiii @penguinpablo, thanks for updating Cryptocurrencies Market Overview, Really very interesting postion, what's going on here, mostly coins are going down and the only BTC is rizing.You really do a great efforts for making this statistics keep it up My Appreciations and Support with you.

Hmmmmm a country is releasing their own token that's extremely interesting. I'm extremely happy that litecoin is still sky rocketing! Should hit 300 by the end of this month at this rate and litepay being fully ready by then.

I am not a short-term trader. I am HODL-ing for the most part - with a few virtual assets (VA) AKA cryptocurrencies (CC) that I might swing-trade / trade occasionally.
Based on your monthly, therefore, applying my 7 rules: https://steemit.com/trading-rules/@freedomshift/7-rules-for-trading-investing-hodl-virtual-assets-aka-crypto-currencies , I probably should sell some LTC and ETC and buy PPT if I use +/-50% on a monthly chart as trigger.
Note: This is just for discussion and for thought and is not a recommendation or advice.

Great post @penguinpablo, please how can i buy steem power and SBD using blocktrading? Pls help me out.

What’s everyone think about the petro token?

Does a fork mean you now own double the litecoin you previously owned?

After the fork you own 10 Litecoin Cash coins for each Litecoin you owned at the moment of the fork.

I know it is too soon to tell, but the petro token... I don't know, it sounds fishy already. Great post.

in our country Cryptocurrencies are banned :(

What country is that again?use vpn and buy via other ways.

Can anybody invest into the Venezuelan Petro token?

Everything is awesome (not referring to the sarcastic song of the same title). Very helpful info. Thanks for sharing.

"Bank of England governor Mark Carney is trying to spread FUD by claiming Bitcoin has failed as a currency."

With the hope that Bitcoins value sinks again so that he can buy the dip.