$850m raised in Telegram ICO: Is this the largest cryptocurrency scam yet?

Telegram planned to launch its own blockchain platform and native cryptocurrency, powering payments on its chat app and beyond. Tthe “Telegram Open Network” (TON) will be a new, ‘third generation’ blockchain with superior capabilities, after Bitcoin and, later, Ethereum paved the way.

The company plans to raise a staggering $1.2 billion in total, starting with a $600 million pre-sale that’s strictly for traditional venture capital backers and those inside its executive’s close circles. That first stage is running from January to February by invite-only.

Following the pre-sale, the firm plans to hold a public sale in March which will allow retail investors to enter. The public sale is pegged at $600 million, which would make the overall ICO worth $1.2 billion.

The current pre-sale has been oversubscribed at $850m, according to a Bloomberg report As for the project itself, Telegram is aiming to develop a series of services alongside its messaging app, including:

A document submitted to the SEC earlier this week states that the money was raised for:

The security is described as “purchase agreements for cryptocurrency” and the filing is signed by Telegram CEO Pavel Durov.

Concerns with the ICO

According to a Forbes article, Telegram has no viable business model as it does not generate any profits - on purpose. The FAQ on the Telegram website states that:

“If Telegram runs out, we will introduce non-essential paid options to support the infrastructure and finance developer salaries. But making profits will never be an end-goal for Telegram.”

Gregory Klumov, CEO and Founder of STASIS, sees this ICO as Telegram's vehicle to raise funds without diluting their shareholders capital and to cover the cash that the business is using. Additionally, there seems to be a lack of official announcements from the CEO of Telegram regarding this pre-sale creating some suspicion regarding the ICO. The key question here is why does a free messaging app need the blockchain, a token or a $1.2bn ICO?

Taking a deeper dive into the Telegram ICO, there appears to be a lack of team information with the founder being an anonymous PhD candidate with no links to social media profiles or pictures. There also seems to be a lack of community building around this ICO with no official announcements from the founders that this is legitimate. 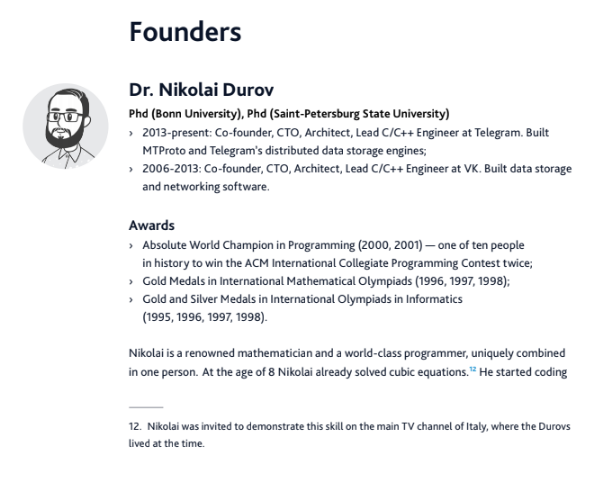 Additionally, even if the team is real, their goals of creating a new token which promises to be drastically better than any existing technology would likely require a team with years of experience in consensus mechanisms and scalability rather than the current team's experience in creating their messaging app.

“They’re promising something that will somehow be radically better than everything else out there, with no real explanation of how that will happen or outside scrutiny of those claims.”

If questions about Telegram’s motivations, the maturity of its team, and the practicality of its plans weren’t enough, we’d still have to navigate a minefield of scams around the ICO.

In fact, numerous web sites, including gramtoken.io, tgram.cc, ton-ico.com, ton-gram.io, grampreico.com, tgram.cc, gramtoken.tech and others have arisen, collected perhaps tens of thousands of dollars or more in Bitcoin and Ether, only to disappear from the web (although some may still be online).

If you haven't made up your mind about the Telegram (GRAM) ICO yet, please make sure to do your own research as participating in any ICO comes with its own risks. Cryptovate aims to educate the public regarding the risks and rewards in the cryptocurrency space.

I totally think it's a scam, and there is absolutely no reason whatsoever for them to tokenize.

Then, you have the pre-sale garbage tactic of old world investing to boot, which means all the early investors will dump, once the normies are aloud to jump in... it's so sad that this is going to take so much money from people in the end.

Especially when these early investors get it for half price... We're all just paying for their profits

That's exactly right, and so many people aren't even going to realize this... so sad.

"The key question here is why does a free messaging app need the blockchain, a token or a $1.2bn ICO?"

This is a great question to ask about any ICO.