There is a private club who owns 10% of the world's surface.

In September 1961, Sir Julian Huxley a British evolutionary biologist, eugenicist, and internationalist who was the brother of the famous author Aldous Huxley officially established the World Wide Fund for Nature (WWF) a non-governmental conservation organisation aiming to reduce the human footprint on nature. Along with Prince Philip, Duke of Edinburgh and Prince Bernhard of the Netherlands the organization used and continues to use its strongly connected members and power to help preserve many areas around the world and has fought to protect endangered species against poaching and various other great acts in preservation.

However ten years later in 1971 Anton Rupert a South African entrepreneur and conservationist along with Prince Philip and Prince Bernhard formed an independent organization around the WWF that would be separated from donations from the public but would have the power to control administrative and fundraising tasks for the WWF. This inner circle became known as the 1001 Club.

Very little knowledge is known or can be found on this group. The club was formed with the Princes along with Rupert and his new personal assistant Belgian Economist Charles de Haes inviting 1001 preselected individuals to become members. By 1974 all members were recruited and accepting the membership meant $10,000.00 from that individual would be deposited into the clubs trust.

The members list were withheld for an extended period of time and very little media coverage has ever been available even to this day. The only real press coverage that has ever been focused on the 1001 Club was a piece in 1980 by Private Eye Magazine.

A very brief 1978 report in The Times confirmed that Prince Philip gave a reception at Windsor castle for the 1001 Club members.

One of the strangest things about the 1001 Club is some of the questionable individuals who have been confirmed to be club members from all over the world and are able to rub shoulders with various bankers and “respected” elites including royalty and nobility of our societies.
Some confirmed members;

So with this in mind is the 1001 Club just a bunch of wealthy individuals (never mind how the wealth was attained) getting together and using some of their finances to give back to the world? Or is it something else? Another point to bring up is Prince Bernhard was responsible for the formation of the Bilderberg Group another group with a host of secrecy, surrounded in speculation.

So how did this group come to own 10% of the world's land mass?

There’s no doubt that anybody who joins the 1001 Club and through WWF could benefit from networking with other members and help one another expand their own business interests. But aside from that the 1001 Club has been accused of actively working towards depopulating the planet. Along with the IMF and World Bank, Controlling and extracting resources from third world countries and maintaining that these countries stay in debt to them.

So this brings us to a Dutch Attorney J. Wilgers who looked extensively into the 1001 Club he uncovered the following;

The IUCN (International Union for the Conservation of Nature) and the WWF (and therefore also the 1001 Club) have been created as fronts for British neo-colonial policies:

"In 1948, the IUCN, the International Union for the Conservation of Nature, was established. The most important person involved was Julian Huxley. This IUCN had a close working relationship with the British Colonial and Foreign Office. All his life Huxley had been working on projects related to the conservation of nature.

In 1960, he made a trip through the British colonies that were about to become independent. He made sure that the British government was able to keep their hold on the nature reserves located in the countries of the Commonwealth, even today. Somehow he was able to convince the new African leaders that every person from Africa was a natural born poacher.

"Great Britain has always been preoccupied with the capture of raw materials from the countries in the Commonwealth and the protection of the unlimited supply of it. It is noteworthy that the IUCN still has the affix, "for natural resources" [International Union for Conservation of Nature and Natural Resources].

I also point to the fact that the IUCN is an extension of the government offices and the public sector of the United Kingdom, because in the end, these are the real beneficiaries. A year after Huxley's trip, the WWF was established with the sole purpose of gathering funds for the IUCN. The IUCN went to the background at the moment the WWF came into existence...

"Thirty years later, the WWF controls 10% of the world's surface. They control 40% of Tanzania. At the moment they are focused on South-America. This is something of the last 5 years."

In other words the WWF has been set up to secure conservation parks but in areas that hold within them valuable resources. Whether that be minerals, exotic hunting grounds, natural resources, oil deposits or anything that can be extracted for the benefit of the West and the benefit of these elitist financial power cliques. If the West did not hold onto these valuable parts of Earth and began to run out of their own deposits the West would collapse.

There are also claims that these conservation parks held by the WWF have hosted training grounds for various “bought” Militias that would benefit the needs of the 1001 Club’s agendas and further business opportunities.

“All the animals, the plants, the minerals, even other kinds of men, are being broken and reassembled every day, to preserve an elite few, who are the loudest to theorize on freedom, but the least free of all.”
― Thomas Pynchon, Gravity's Rainbow 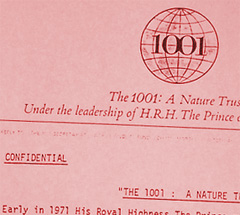 Very interesting post! I'd never heard of the 1001 Club before. Excellent quote by Pynchon which, I think, sums it up very well.

Thanks, yes it's very hard to come by info, I'm looking into it further. Yeh Thomas was an absolute brilliant mind.