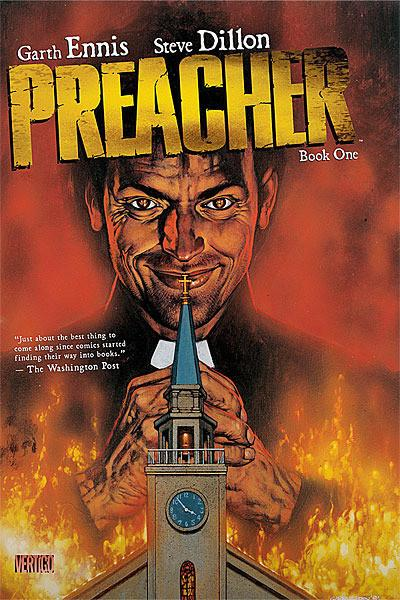 Preacher is the story of a Preacher named Jesse Custer from a small town in Texas called Annville. One day, Jesse is accidentally possessed by a creature named Genesis who is the offspring of both an angel and a demon. The entire incident destroys the church he was in and kills every one in it. Leaving Jesse to himself around all the destruction. With Genesis a part of Jesse now, it gives him power. Basically it gives him the word of God, pretty much. He's capable of speaking a certain way to people, and if they understand and hear what he says, they automatically obey, without question. It's quite interesting. With his new found power, Jesse Custer becomes potentially the most powerful being in the entire universe. So, Jesse sets off across the United States attempting to literally find God, who abandoned heaven the moment that Genesis was born. On his journey he runs into an old girlfriend, Tulip O'Hare who assists him, as well as a new friend named Cassidy, an alcoholic vampire. All through out their journey they encounter a number of enemies both religiously motivated and just some assholes who want them dead. The Saint Of Killers and Herr Starr are both familiar faces all through out the story, reoccurring enemies that you get to know just as much as Jesse, Tulip and Cassidy. One encounter that really stuck with me the most after reading everything was when Jesse was brought back and captured by his nasty Cajun redneck grandmother and her two henchmen Jody and T.C. Two very interesting characters, ones that stand out for sure. Jody is Jesse's grandmother's enforcer, her muscle basically. He can send a man flying with just one punch. Intimidating as hell, even to Jesse. And T.C. is damn near the complete opposite. A greasy oddball looking dude who has an obsession with having sex with damn near anything. They're quite the interesting duo. While enduring what they put Jesse through, you always get shown flashbacks of how they abused him when he was much younger and practically forced him to become a preacher. They took this man to extreme breaking points. It's crazy to see just what they put him through. 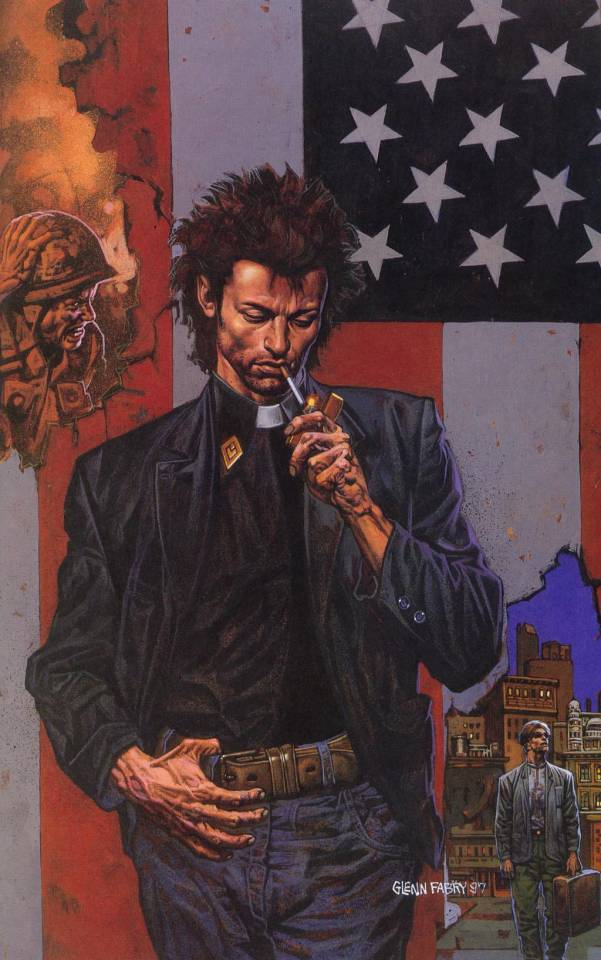 Jesse Custer was born on September 19, 1973, son of U.S. Marine John Custer and Christina L'Angelle, a troubled runaway. Soon enough his mother's family found her and were prepared to murder John and take her away until they learned that about the kid, Jesse. They then brought everyone back to his grandmother's. It was here that he suffered years and years of everything he loved being constantly taken from him. No matter what he did he could never escape. Forced to become a preacher by his grandmother, his life was pretty much destined to lead him where we find him in this story. He's a powerful character, someone that you'd never once doubt and not exactly your traditional, super hero in a suit character. Makes him almost more easier to relate to than most comic book characters. Tulip O'Hare is Jesse Custer's romantic interest of the story. And goddamn is she fine as fuck. The illustrators did her right. She is a skilled marksman, taught by her father who raised her himself after her mother died after childbirth. Later on in life, Tulip meets Jesse at a friend's bar. Their relationship soon turns into them constantly entwined with each other and funding their whirlwind of romance with petty crimes. She soon falls deeply in love with Jesse, only to be abandoned by him in the night. Without Jesse she falls into drug abuse. Making a deal with a crime boss for money for rehab, Tulip fucks up and is caused to flee. In the midst of her on the run, she runs into Cassidy. Our alcoholic vampire. Whom offers her a lift, which she accepts. At this point, fate brings her right back to Jesse, where she always wanted to be. She's an important character in this story and is part of the motivation of both Jesse and Cassidy through out the story. 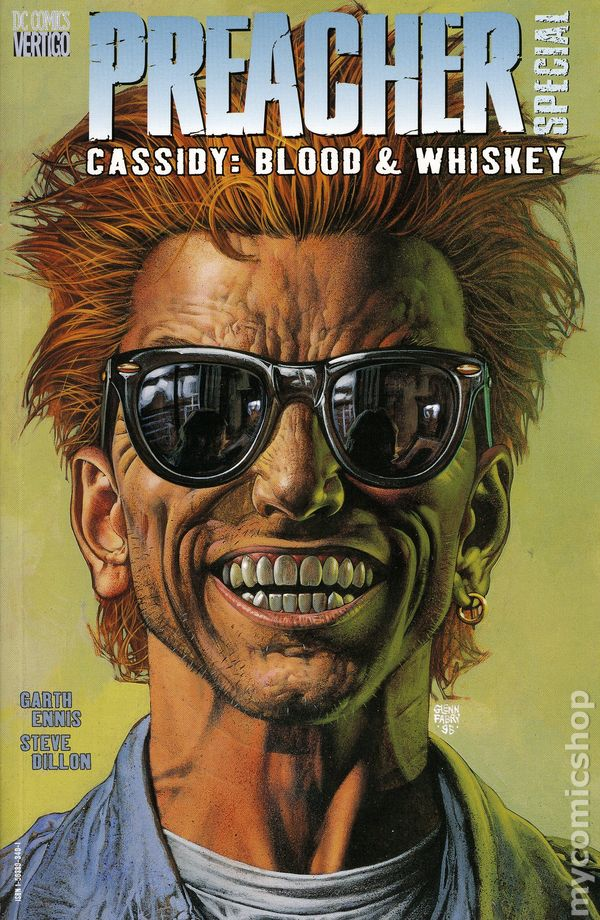 Cassidy, real name Proinsias Cassidy, is an alcoholic Irish vampire. Back in 1916, Cassidy was among the Irish volunteers who took part in the Easter Rising, which was an Irish insurrection against British rule in Ireland. Where he fought along side his brother. Due to the impending failure of the Easter Rising, Cassidy was forced to flee the army he had joined, which is when he gets bitten by a vampire. As he escapes death. From that point on, he never aged one bit, maybe changed up his style here and there a few times and can only come out at night time, but he always looks the same. He then takes off for the United States so that everyone would think he was dead, where he becomes quite the alcoholic and drug abuser. After meeting Tulip he inevitably comes to meet Jesse, and they become the best of friends and become the the duo you love to see whenever the pop up on the page. There will be times when Cassidy will probably piss you off. He's not the most lovable character, but he fits well with the rest, without a doubt. The Saint Of Killers might be my favorite character from the whole damn story. He's a fuckin' bad ass. He first shows up as a heartless murderer who was transformed into the Angel Of Death, being made to collect the souls of those who die from violence. He is given the task from Heaven, to find and kill Jesse Custer because of Jesse's new found possession by the demon-angel Genesis. When the Saint Of Killers pops up on the page, you know for a fact that someone is about to be murdered. There is no fucking question about it. He mostly sleeps, for long periods of time and is only woken when people need to be murdered. Probably one of the most powerful characters in the whole story, I mean, imagine getting permission from Heaven to kill people. Rules do not apply to the Saint Of Killers, most likely when you see him, you're already dead. 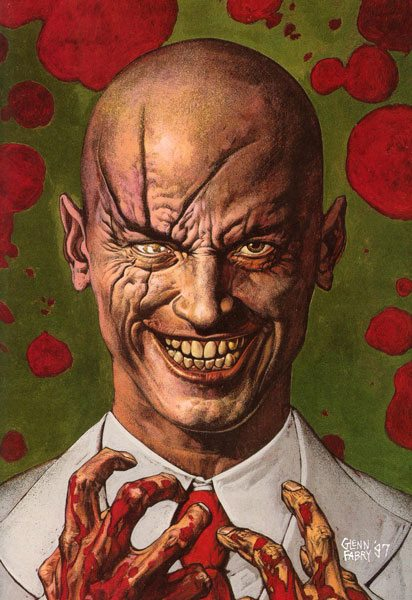 Herr Starr is one of the more odd characters from the story. At least in my opinion. He was recruited by The Grail and made a Sacred Executioner, and trained damn near every member of the Grail's private military. When he finds out about Jesse Custer, he musters up a plan to use Jesse an alternative Messiah to over throw the Grail and all that they stand for. He has one of those military personalities, very strict and easy to anger. And also a homosexual. Which is actually brand new to him when our story begins and the reason why is actually pretty fucked up. I'd say Herr Starr might have to be one of the most abused characters in the whole story. Without doubt. He's always getting bones broken or always being humiliated in one way or another. His anger and his influence are what make him so dangerous. And his determination to get a hold of Jesse Custer only makes him more dangerous. Arseface is one of the most bizarre characters I've ever seen in any comic, so far. I mean, the fact that anyone can really understand what the fuck he's saying is crazy to me. But it makes it so interesting to read. Arseface is a boy who while growing up in an abusive household attempts to commit suicide just like his hero, Kurt Cobain. After a bad altercation between Jesse and Arseface's father, the father is pretty much forced to end his own life. At this point, Arseface then begins a manhunt for Jesse Custer and vows to murder him when he sees him. Without giving too much away, Arseface eventually becomes a popular face through out the entire country and heads into a direction that you would never possibly guess when introduced to this character. I believe that Arseface is a physical representation of just how crazy these comics can get. Especially when written by Garth Ennis.

I give this comic the highest rating it can possibly get. Garth Ennis is an amazing story teller. I mean, there's more than a handful of things in this story that you never see coming. Plenty to surprise you along the way. If you're a religious person, I can definitely see how this could offend you, but I am not religious, what-so-ever. Using Heaven and Hell to tell an amazingly disturbing story was a genius idea. I enjoyed every issue and I recommend reading it before you watch the TV show. That is if you haven't already!