You Can Also Make It In Life!

andrewade (50)in #christianity • 4 years ago 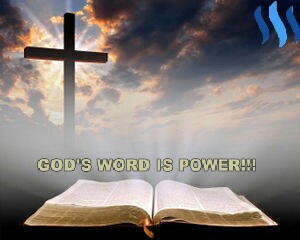 He sent his word, and healed them, and delivered them from their destructions. Psalms 107:20 (KJV)..

The opening scripture talks about the indisputable dominance of God's power over the people. Also note that, the Word of God can also be seen as the power of God, because from biblical evidences, when the Lord wants to work either in heaven or right here on earth, He first uses his Word.

A perfect instance of this gospel can be found in Genesis chapter one, God used the power of His Word to create the heaven, earth and the things that lives in it. This is the same way He used His Word to amend the lives of the people of Israel at their times of great distress.

My brethren, God's Word can brighten your life and transform you to be the right personnel. Whatever awful situation you find yourself, you just need to go into the scripture and search God's Word for it.

Use the Word with faith, and whatever you may desire shall be granted by the power of God. As a child of God, you're destined to benefit from His holy Words. Hallelujah! Share your testimonies below.

Trust in God with utmost faith, you will be guided where you want yourself to be headed to.

No. Trust God. Go where HE leads you.

No, we can't just name it and proclaim it. We can't use magic words to get what we want from God. We should pray for the things we need and the things we want but the result is up to God.

I got your mentally deranged private message that you sent to me in Discord before you blocked me right after you sent it.

I only read first paragraph of this delusional essay as it became self evident to me that it is some sort of "I'm sooooo enlightened"/"I'm so awakened and soooooooo spiritual" bullshit mambo jumbo.

You preach everyone about your Christian teachings while you are just you are just petty lying scammer that kept on lying with your ignorant, patronizing attitude and used Psychological Projection mixed with aggressive language.
Calling you a liar was not offensive but simple description of your behavior.

Same as me describing your behavior with factual information based on above message that you sent to me:
You are, evidently, psychologically unstable, intellectually dishonest and delusional halfwit. What's worse, you have also proven to have little moral and self integrity due to your clinically compulsive lying disorder. I recommend going to your local Mental Health team and looking out for therapy.

I don't get offended by bullshit. Certainly not from some petty, deluded scammer. Just because we are strict against certain behavior (such as scamming, verbal and vulgar aggression towards our members, etc), it doesn't mean that we are offended by scammers like you.
Regardless how much you would like us to be, we wouldn't waste energy on getting upset or offended by someone's mental problems. These are your mental problems not ours.
Being direct with description of scammers and lairs like you is simply a part of our work.

You have been "muted" so I will not see any replies for you, so I don't have to read more of your mentally unstable nonsense.

Amen my friend! Best to walk with Him Who possesses all power! What an Awesome God!