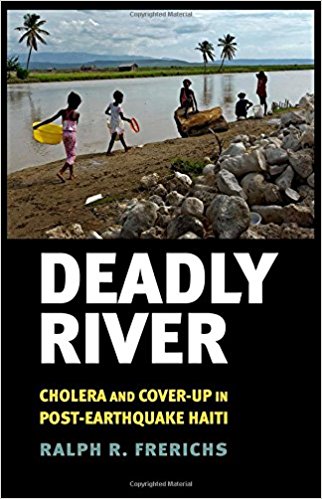 This book was written by Ralph E. Frerichs, describing a French Epidemiologist's mission in Haiti to crack down on the cholera epidemic that took place in October of 2010. Piarroux's main goal was to identify the source by which the outbreak was occurring, which turned out to be quite difficult due to social and political ramifications afflicting Haiti at the time. Cholera had never before been seen in Haiti, so many public health officials overlooked this disease as the potential agent causing the outbreak. Upon further epidemiologic investigation, Cholera was deemed as the cause of the outbreak, but still its origins remained unknown. The Haitian people were outraged and wanted to know how and why this outbreak began in the first place. Locals were certain that the disease was brought by UN peacekeepers from Nepal, but for some reason the data was not lining up. Piarroux continued his intense outbreak investigation in order to get to the bottom of this epidemiological mystery, which was reaping havoc for an already devastated Haiti. Many theories were tossed in the air during the time of the investigation, but something was creating a major hindrance in determining the answers behind the outbreak. While intense investigation by public health officials continued, cholera persisted to tear through Haiti like a wrecking ball.

The Deadly River goes into grave detail regarding a real world example of a cholera outbreak that occurred in an impoverished nation where sanitation and access to adequate health services are limited. This book depicts the significance of public health action by all sectors when trying to solve an outbreak, especially one of such heightened magnitude. Investigating outbreaks is extremely important for many reasons, but the main motive being to contain the spread of the disease, and to eventually eliminate the disease, such that people can live without the fear of becoming sick and dying from something preventable.

This particular outbreak, however, included a number of different barriers that professionals had to overcome, which severely delayed the investigation process. This had detrimental impacts over the course of the outbreak for the country as a whole, but especially for those who were directly impacted by the epidemic. With an upcoming election in full swing, political and social implications controlled much of what was happening behind the scenes with the epidemic that was ripping through central Haiti. Large organizations, such as the United Nations and the WHO directed the scope of the outbreak away from its true origins in order to protect the political processes taking place at the time. This book specifically depicts how large organizations, public health officials and NGOs clash heads over how to effectively deal with public health crises that affect the world's most vulnerable populations.

If you are someone that is interested in learning more about Public Health and the investigation of outbreaks, then this book would be considered a must read. It is written in very professional epidemiological terms and denotes how to go about solving a disease mystery, such as the one highlighted in the Deadly River. The book specifically demonstrates the steps of an outbreak investigation in full detail, so this book could be utilized as a vital resource for someone pursuing a career in the field of Epidemiology. In writing this book, Frerich's takes the reader through the mind of a professional trying to solve what seems to be an impossible mystery devastating Haiti. I would highly recommend this book for those individuals that are interested in learning about Public Health and its course of action, as well as the protocol administered during a public health crisis.

What public health junkies, other than myself, would be interested in reading this fantastic outbreak investigation book?

Let me know what you all think down below

Congratulations @conradsuperb! You have completed some achievement on Steemit and have been rewarded with new badge(s) :