The Legend of the 100 Step Cemetery

Ah, the cemetery. Even hearing the word itself provokes a certain sort of macabre feeling in the soul, does it not? While the cemetery always has been and always will be foremost a memorial site for our loved ones who have passed on, there are always plenty of ghostly tales and eerie accounts of mysterious sightings to go around when the topic arises.
After all, the notion of going to a place where you’ll be walking on top of hundreds—if not thousands—of decomposing humans is a rather chilling conceptualization. When you think of it like that, it truly is no wonder why cemeteries have become a staple for so many horrific accounts.
Out of the vast expanse of those scary stories that entail a graveyard as a backdrop, there is one cemetery that sticks out above the rest. In this article, we’re going to see how the legend of the 100 Step Cemetery stacks up against actual visitor accounts. 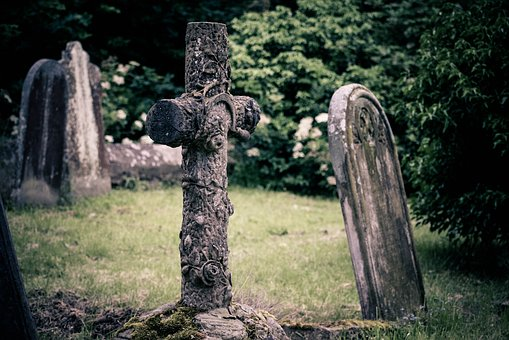 Brazil, Indiana is a little village with plenty of cute little mom-and-pop shops, restaurants, and a couple of neighborhoods. It’s a rather quiet place, and the demographic age there leans more towards 40+. As one drives through this cozy town, the last thing they might suspect is the fact that this place is the home to one of the most heavily paranormally investigated cemeteries.

The 100 Step Cemetery isn’t taking any new bodies and hasn’t for years, but that hasn’t stopped tourists from flocking in, in hopes of being able to live out the fate-filled legend.
One should plan their trip on the darkest night of the year and be set to arrive around 11:58 PM to get the full experience. Upon pulling up, you’ll see that the only entrance is by way of a hill that holds 100 stone steps. They’re shallow in height, but they are incredibly weathered, leaving them with cracks and unevenness which can make for a dangerous trek if one is not careful.
As soon as you approach these steps, you’ll want to make sure that it’s exactly midnight as your foot hits the first stone step. As you ascend these steps, you have to count each and every one, and as soon as you’re done scurrying to the top, you’re met by a demonic, yet harmless presence.
Silently, it will instruct you to look out into the darkness that covers hundreds of gravesites from the 1800s, using that pitch blackness as a hypnotic screen to show you exactly how and when you will die.
After that, you must quickly turn around, going back down the rickety stone steps, counting each one again on your way down. The legend has it that if you count the same steps going down as you did going up, the demon showed you a precise vision of your death. If you do not count the same number, the demon was incorrect with his foretelling.
Many people have played with this and have tried going into the cemetery alongside of the steps and in the grass or by walking on the thin stone slab that runs along the steps. However, it has been reported that an unseen and grisly force pushes you down the hill so hard that an imprint is left on the skin for weeks afterwards.

Some skeptics have reported that they felt and saw nothing when they’ve visited the 100 Step Cemetery aside from the pungent darkness that falls over this recluse area. Some ghost hunters have documented their visit here, and the only result was capturing a small amount of orbs on film.
Others, however, have retold grim tales of actually being pushed down the hill after trying to go back up, but they have yet to show any proof that they had the mark of whatever entity actually asserts its force onto them.
Though visitor accounts vary, no one has actually reported that they’ve seen the demon atop the steps. Does it exist? Or are they still too shaken to recount their tale?
The two common consensus pieces are that the steps actually do not total out to 100, but rather, numbers provided from ghost hunters fall within the range of 50-80. The second, are the EVPs (or, electronic voice phenomenon) that get recorded from the white noise such as the wind. Clear statements can be heard such as “death” and “widow”, but is this actual ghostly communication? Or is it the work of electronic manipulation?

Only you can be the judge of whether the legend of the 100 Step Cemetery is true or not. Hundreds of people have traveled near and far to see for themselves, and if each one came back with nothing to report, it’s doubtful that more would continue to flock as time goes on, so there may very well be something at play in the cemetery. It’s up to you to find out for yourself.

We are yet to discover have fun nice article

your post is great thanks a lots for sharing it keep on posting ;)

Im new here, how did you get so many votes?

well i have followed you, clearly youre doing something correct, hopefully your luck rubs on me.. my plan is to provide quality content.

Thank you! :) I have followed you too

What an interesting story....I love the paranormal.

Pleased to hear it :)