If you haven't read the first 2 chapters in this series, you might want to start there so that you have some context to what I'm about to drop. Moving forward, PLEASE BE WARNED: I will be writing about childhood sexual assault with some details that will undoubtedly be incredibly uncomfortable to some readers.

I don't remember anything about the day that led up to the night of my molestation, but I do remember bits and pieces leading up that moment -the moment my young life was thrust into a new and traumatizing existence.

My mom had been dating a lot around this time. Oftentimes, we'd just end up at her best friend's house and us kids would be confined to one part of the house while the adults occupied the other. But on this particular night she had a legit date and decided to take me to her best friend's house to be babysat. At some point, however, the friend, also newly divorced, decided she wanted to go out, too, so they had to find alternative care for me and the friend's two older sons. From what I can remember, they didn't have many female friends. However, they knew a few male acquaintances who might be willing to babysit us. Why they didn't call my dad or the boys' dad, I'll never know. Instead, they called a man named Tim C. -a man my mom has since admitted was a loner weirdo type. I guess going out sometimes means you make sacrifices, including safe & adequate care for your children. They decided Tim was their best option since he was likely the only one who agreed to watch the three of us. We were 6, 7, and 8-years-old. He told my mom and godmother that he was having a small get together that same night at his apartment, so most likely, we would be sent to bed early. The moms were fine with this, just as they were fine giving their children to a weirdo loner type.

Walking into the apartment, fear swelled up in my little heart. The apartment was not well lit. Rock music was playing. There were beer bottles, maybe liquor bottles, too, strewn about on tables. I don't remember saying goodbye to my mom. It seemed to happen very quickly, as if they were in a rush to get on with their child-free night.
And that was that. We were left with Tim.

This man was a stranger to me, mind you. The people in his apartment were also strangers to me. My only comfort were the two male friends who were there with me. I don't remember much of what happened in the time between arriving and going to bed. I just know that at some point I was sent to Tim's room to go to sleep. I feel as though it was pretty soon after our arrival. However, my friends weren't told to do the same and I remember thinking that it wasn't fair. I didn't say anything, of course. Being scared and already trained to do as I was told, I went to lay down without fuss. Maybe I was glad to be away from the music, the strangers, and Tim.

What happened next is THE pivotal moment of my childhood. Mind you, there were other very unpleasant moments/abuses, but this one changed....everything. The fact that I can so clearly remember it is kind of astonishing. I remember the layout of the room. The bed. The events that would unfold. I'm going to share those now, so please take care of your own emotional needs as you continue to read.

At some point in the night, I was awakened by Tim pulling off my shorts. I didn't yet open my eyes, but I was fully awake and aware of what was going on. I was petrified. I laid there pretending to be asleep, pretending what was happening was not happening. Maybe if he knew I was sleeping, he would just go away. Isn't that how all children get rid of monsters? Sadly, it was happening. It was real. And no amount of pretending was going to change that. Even as I write about it now, a pain pulls from inside my chest -a discomfort that's screaming, NO! DON'T GO THERE! But I have to. Again, this is part of my healing journey. Silence no longer serves me.

Tim slid off my panties and began touching me. I tried to turn over, but he prevented me from doing so. He then lay at the foot of the bed and put his head between my thighs. He began oral sex on a 6-year-old little girl. On me. I'm not sure I can accurately convey the terror that paralyzed my body. I could no longer move or try to turn over. I could not open my mouth to say no or to scream. I could only lay there and pretend to be asleep. Maybe I was pretending to be dead. I don't know how long this lasted. In hindsight, it feels like a lifetime that I lay there having my soul shredded into pieces. In reality, it likely lasted only a few minutes. Funny how a few minutes is all it takes to dislodge your innocence before it's even had time to bloom.

Remember, there were other people in his apartment. I cannot remember faces. I'm not even sure I saw them before going to bed. I do not know their ages. Were the boys, my friends, in the room, too? I don't know. I don't know how many were there, but they were in that room, watching this man violate me physically and emotionally. I could hear them. And, at one point, I did a tiny peek. They were standing off to the left of the bed, along the wall near the bedroom door. At first they were talking. And then they were clapping, as if cheering Tim on. It is beyond comprehension. I cannot wrap my mind around this scene knowing that not one single person stopped him. Not one person saw enough value in this tiny 6-year-old girl to intervene in this heinous act. Instead, it was a laughable jolly good time as I lay there pretending to be dead while a grown man assaulted me. I do believe he inserted his finger into my tiny body, but I do not know if he penetrated me beyond that. I don't think he did. But, as is the reality with too many of these cases, my brain went into protective mode and I slowly began to fade out. It was as if my body was awake, but my mind went black. However, I do remember that when the violation was finished, the room fell silent and Tim put the panties and clothes back on me before leaving and closing the door behind him. The last thing I remember is rolling over to face the wall.

And that's it. I remember nothing else. I don't remember if I cried or if I had any sort of reaction to what had just happened to me. I don't remember my mom picking me up the next day (or maybe it was later that night). In fact, as a means of self-preservation, I don't remember the rest of that year. My memory seems to kick back on around the age of eight. Everything between that night and 8-years-old is a total blank. I've seen some pictures of those years, but cannot associate myself with any of them. It's as if I'm looking at a stranger's life. 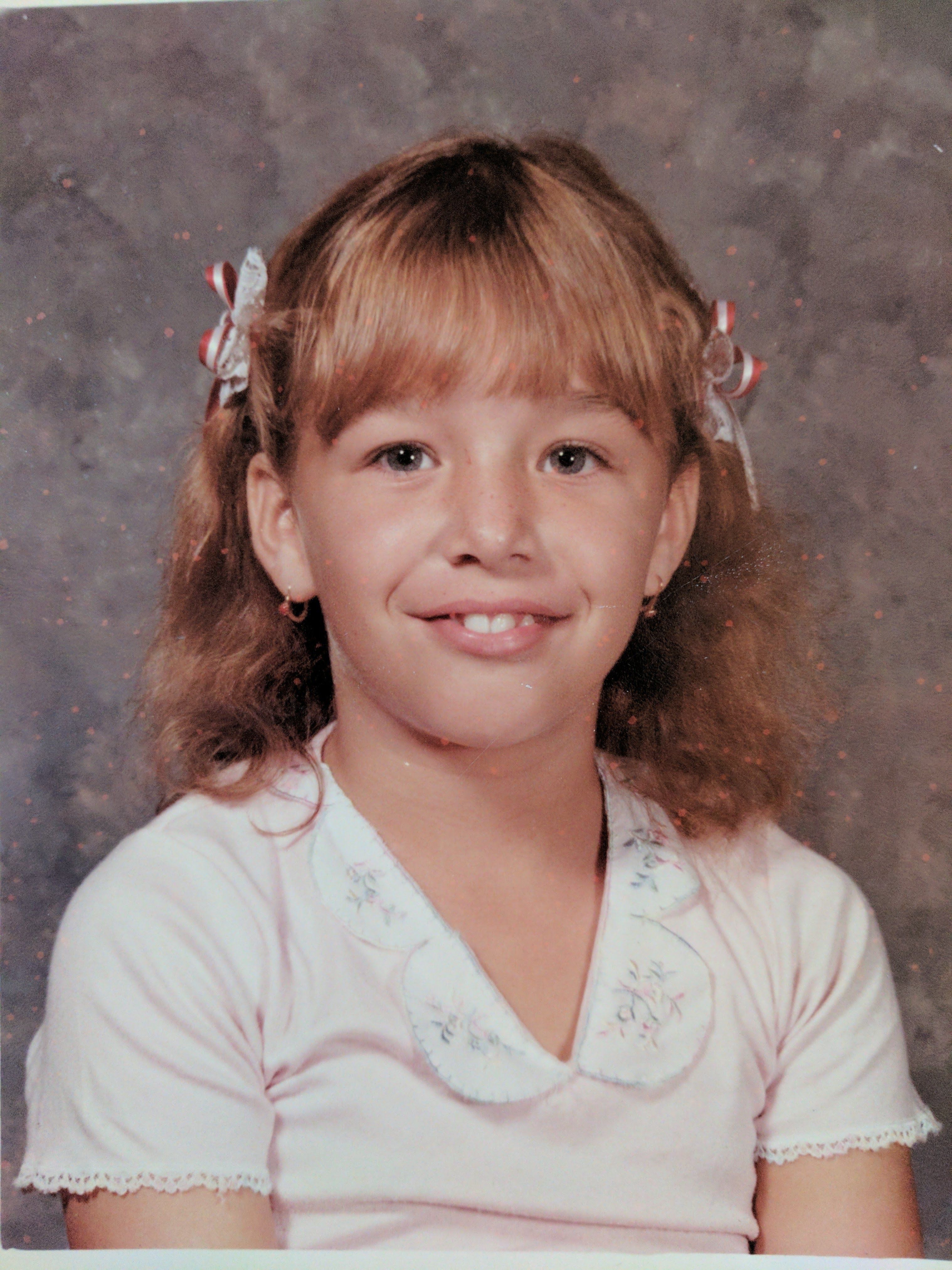 This is really heavy shit, I know. So I think I will end here for now. I'm feeling all kinds of ways in this moment, knowing for the first time ever in my life, I am sharing this in a public format. I have a lot more to write about, though. As you can imagine, my life thereafter shifted. There will be more tales of sexual abuses. There will be more abuse at the hands of my mother. There will be rampant emotional neglect. There will be textbook outcomes of early childhood sexual abuse: early sexual activity, low self-esteem, teenage pregnancy, lack of understanding my right to autonomy, and more.
There will also be the story of my 17th birthday -the night, while having dinner at Bennigan's with my mom, that I finally summoned the courage to tell her about what had happened to me nearly a decade before.

Her answer will be, "I know" and nothing more.
There will be a lot said about that, too.

that was very hard to read for me...what an awful experience! I hope this guy either dropped dead or is in prison!

Sadly, he is not. There will be more to the story explaining my recently finding him, though.

oh I'm very much looking forward too reading it! I hope he gets some sort of punishment

Disgusting! I am so sorry for you. That a mom can let this happen, is just.

I want to invite you to our group where we look for promising authors: https://discord.gg/vDPAFqb

Congratulations @soitgoes, this post is the forth most rewarded post (based on pending payouts) in the last 12 hours written by a Dust account holder (accounts that hold between 0 and 0.01 Mega Vests). The total number of posts by Dust account holders during this period was 12896 and the total pending payments to posts in this category was $3140.93. To see the full list of highest paid posts across all accounts categories, click here.

Holy moly! Thanks for this update (and for reading)

so sorry to hear about what you went through. karma will surely get back at the offender one way or another.

Memory loss seems to be so common afterwards. Its so instinctive to block it out. You cant talk about it or process it normally like the other things in your life so it becomes a dream. At seven years old you should be starting to form lasting memories, but you have been robbed of them. So sad and so annoying. (To put it very mildly)

Exactly. I've done quite a bit of reading on childhood sexual assault, have been in therapy for a year, and currently volunteer at a non-profit for child assault victims. The brain knows how to protect us, but unfortunately, in that process, we lose so much. Thanks for reading. <3

I can relate to so much of this. The blank memories, the missing years and years. I never realized that people could generally remember before age nine until I was in my late teens and it somehow came up. That was the first hint I ever had that something was different about me.

Thank you for being so real, so raw with your story.

I hope you can find healing.

Thank you my friend. Writing is definitely bringing me some sort of peace that I haven't found in therapy or in reading, so I'm going to stick with it until my brain's finished purging.
Funny, too, I didn't know that my experience wasn't the norm for everyone. Everyone I knew, boys & girls, seemed sexually advanced (looking back, I can see this clearly) and then as I got older, I blocked it out for years and never gave it a thought, so it was a non-issue for me as far as thinking about it, but all the behaviors were there.