Thoughts on Director John Carpenter at 70: THE THING, THEY LIVE and the Terrifying 1980s 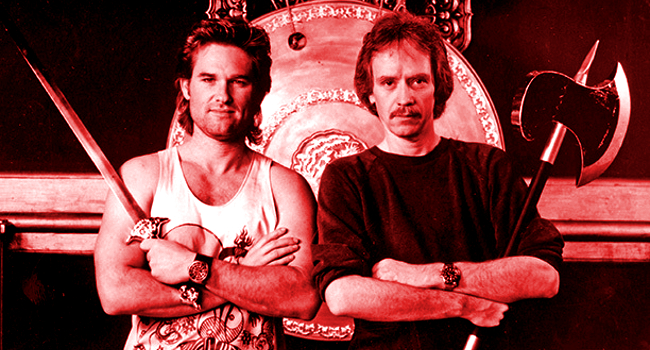 John Carpenter’s films like Halloween and The Fog have helped to define contemporary horror cinema while simultaneously displaying an inventiveness and imagination that transcend the genre, putting John Carpenter movies in a class all by themselves. Two of the auteur’s most unique offerings were released in the 1980’s: They Live (1988) is an original story about a man, a pair of special glasses, and a vast conspiracy to rule the world. The Thing (1982) is a body-snatcher flick about a parasitic alien run amok in a frozen research outpost in Antarctica. Both films are Carpenter classics, and both movies are Reagan-era studies in paranoia that make these films pair more perfectly than most viewers may have noticed.

No matter how you describe They Live it’s impossible to make it sound like the must-see film that it is: A wandering drifter stumbles into Los Angeles – a contemporaneous Nowheresville devastated by an economic recession and a plague of unemployment. The drifter notices some strange activities at a local church before discovering a box full of special sunglasses which reveal reality as we know it to be an elaborate illusion hiding something very sinister. Add professional wrestler “Rowdy” Roddy Piper in the film’s leading role and They Live sounds like a silly sci-fi gimmick sporting a D-list star.

They Live would likely be just that with most any journeyman director at the helm, but Carpenter has a way of infusing genre clichés with emotional and subversive content, and guided by his vision They Live is a class war battering ram of a film. The movie literally turns 1980’s yuppies into monsters and They Live is as stylized and startling as it is entertaining. Without giving away any of the twists, I can tell you that this movie is a masterpiece of conspiracy cinema and it even manages to make that late, great blowhard buffoon, Piper into a revolutionary hero.

The Thing has a lot in common with They Live: both films are about the paranoia that can creep up when you suspect that the world around you is not what it appears to be. It’s a common mistake to think that Carpenter’s film is a remake of the Christian Nyby movie The Thing from Another World (1951). In fact both films are separate adaptations of the John W. Campbell, Jr. novella Who Goes There. Screenwriter Bill Lancaster’s adaptation is more faithful to the novella than the Charles Lederer script that Nyby shot, and Carpenter drew on the writings of horror pioneer H.P. Lovecraft to evoke the film’s doomed moods and gross-out effects.

Like They Live, The Thing is a sci-fi flick more than a horror movie: A team of American researchers in Antarctica discover an ancient flying saucer buried in the ice after a Norwegian base mysteriously burns to the ground. The Americans retrieve a charred corpse and rescue a sled dog before their own camp is attacked by a shape-shifting creature that takes-on the appearance of its victims. On one level this is a monster movie featuring a great cast of character actors lead by Kurt Russell – there are more beards in this movie than you’ll find at The Edgefield on a Saturday night. But, this being a Carpenter film, it’s also a lot more than that: The Thing is also a body horror movie about infection and trust that was released at the height of the AIDS crisis just one year after the publication of Randy Shilts’ landmark history of HIV, And the Band Played On. The Thing isn’t a hopeful film with a tidy happy ending – the film has no clear hero, and Carpenter thinks of the movie as the first film in a cinematic trilogy of apocalyptic works including Prince of Darkness (1987) and In the Mouth of Madness (1994).

For gay communities in Reagan’s America AIDS probably felt like the end of the world. And The Thing highlights the homophobia that crippled Washington DC’s response to that crisis just as They Live skewers the conservative economic policies that sent the U.S. economy reeling into recession by the end of the decade. All the best scary scenes on screen are rooted in real life horrors. And both of these John Carpenter classics remind us that for many Americans the 1980’s were a terrifying time to be alive.

Submit
$0.00
4 votes
4
Authors get paid when people like you upvote their post.If you enjoyed what you read here, create your account today and start earning FREE STEEM!
Sort Order:
[-]
semipermeabile (48)  ·  2 years ago

The Thing scared the hell out of me as a teenager and I remember jumping so hard when they put the hot needle into the petry dish of blood.

They Live isn't even a guilty pleasure! I love it! Roddy Piper is funny as hell and the concept is anti establishment not unlike The Matrix which everyone loves so much. %100 agreed. We're going to a theater for a matinee this weekend, but if I hadn't seen both of these so many times I'd be tempted to go for the late shows to see these as midnight. I've got The Thing on disc, but I'm not sure if there is a worthy Bluray of They Live out there? I'd love tons of extras about all the conspiracies that link to this movie. It's so damn good. Carpenter is really amazing at taking the silliest shit and making it heavy in the best way.