Bitcoin Face-Rip Survives The Night In The Bush

Last night before heading to bed to give myself a chance to recover from this ongoing virus I'm suffering from, I posted here about the face-tear that Bitcoin provided during the day. There was a lot of talk on Discord about the insanity of it all and discussion about how it's now time to enter short positions.

There is potentially added market demand on the back of another hard fork scheduled for 16 November. The so called SegWit2x software update, aiming to make Bitcoin faster to use, could see Bitcoin split in two again creating a new currency and another gift to existing Bitcoin holders as was the case with Bitcoin Cash and last week’s Bitcoin Gold. The splits see a one for one issue to Bitcoin holders (essentially a dividend) and whilst on both previous occasions investors thought Bitcoin would correct after the split, it barely caused a blip and Bitcoin continued to trade higher afterwards.

It turns out that I've woken up just now to an AUD Bitcoin price that's undeniably survived the night, currently sitting an eyelash under $9,500 AUD at btcmarkets.net. It didn't see the sunrise holding above the 10k many of us were excited about but today's another day. I'm continuing to hold what I have and don't at this stage plan to buy any more, yet!

Yesterday I found myself considering my next metal purchase. You'll likely know me to be a regular stacker and I share what I buy with the #steemsilvergold community. Currently, as I've written about recently, I like silver. To that end I've been considering an Eagle monster box, as seen here: 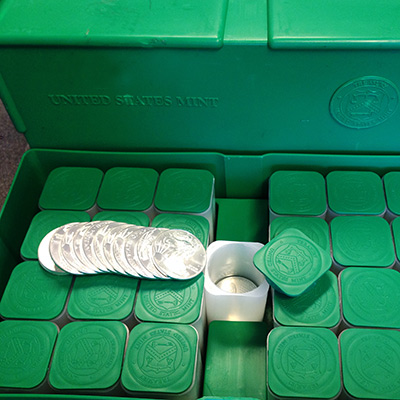 The box is literally that, a big green box containing 500 American Silver Eagles. With credit the description goes as follows:

The American Silver Eagle is the official silver bullion coin of the United States. As legal tender, they're the only silver bullion coins whose weight and purity are guaranteed by the United States Government. It was first released by the United States Mint on November 24, 1986. It is struck only in the one-troy ounce size, which has a nominal face value of one dollar and is guaranteed to contain one troy ounce of 99.9% pure silver. Recognised worldwide and with over 42 million sold in 2013 alone, the design is based on Adolph A. Weinman's 1916 "Walking Liberty" half dollar, widely considered one of the most beautiful American coins ever minted.

Now this is a significantly larger purchase than I've made in one stack update before so I'm toying with this idea at the moment. I've confirmed with the dealer, having not physically seen a monster box before, that it is indeed still easy to transport to a car and from there to a safe storage location. Security in transportation once leaving the dealer was of concern to me and hauling a 14.2kg US Mint designated box didn't seem to be the most discrete option. Helps to be prepared and ask these questions in advance.

At this quantity and current pricing, the monster box would provide an AUD 0.49816 unit discount over the 20 coin tube for a total saving of AUD 12.455. It's not a big saving in that you almost get half a coin worth for the ramp up in quantity so I'm undecided at this stage. Perhaps diversifying would be better. We'll see.

I took the plunge this morning and signed myself up for a #chainbb forum. As I'm quite interested in prepping, I secured https://chainbb.com/f/prepping

I know that those such as @pennsif has been putting effort into trying to consolidate the great info in this area so perhaps this tool will help. The elevator pitch is

"Everything related to preparedness and homesteading. From off-grid power, food production, water storage, keeping animals and alternative forms of communication and transport. This is the place to share and learn!"

I mentioned yesterday the wonderful presentation given by @mrs.steemit at SteemFest last night here in Australia. I read more about it this morning and it looks attractive. To my cursory research, there's an attempt to take on the Facebooks, YouTubes, Twitters and Instagrams of the world and also provide a merchant leg-up to incorporate ways to spend acquired tokens in a manner that seem similar to redeeming airline frequent flyer miles. You can view the trailer below and learn more from @appics and http://appics.com/. You can access the white paper there but in the interest of being concise, I'll reference one of the blurbs here.

Users who spend their time and creativity, posting and voting on content are the source of revenue for any social platform. The users are like the engine of the network. Unlike on any other popular social media site, where 100% of the platform’s value goes to the shareholders, APPICS enables all users to earn a fair share, as well as influence in the network, through a cryptocurrency reward-token (XAP).

The concept addresses some of the core problems social networks are facing due to the reliance on advertising, as well as the issue of mass-adaptation blockchain-based projects haven’t resolved yet. APPICS is more than just a mobile APP that lets users monetize their posts and even their voting, “like”. APPICS is a revolutionary social mobile APP that lets anyone without prior crypto-knowledge benefit from blockchain technology effortlessly.

There are some big names associated with this project including Uma Hagenguth as I've already mentioned and Ned Scott is listed as an advisor. You can request an invite to the ICO presale which I have done but be aware that they're looking at a minimum investment of USD 10k so it's not for throwing Vegas money at. I'd want to know a lot more before throwing that coin at an ICO and I'd want a high level of confidence so for me this is just an interest thing at this stage. For many it will be cost prohibitive initially..

One last shout out to the great work produced by the #minnowbooster team. I've only recently dived into the SP leasing they offer via their market and last night I had my first lease expire. I now enter the 1 week cool-down and I must say, it's a smooth and quality service and I'll certainly be filling more leases in the future (in fact I entered into another one this morning). If you haven't tried the service as a lessor or lessee then I would recommend that you give it a whirl. If you want any help there's great discord support or you can msg me if you want another avenue to field questions. I'd be happy to help.

That's it for this morning everyone. Thanks for your time reading as always and I hope these thoughts provide some useful direction for those out there who are also acutely aware of the need to keep vigilant when it comes to the future of investing their funds. I'm off to hopefully enjoy day of recovery and less time in front of the laptop. Easier said than done!

@nolnocluap Are you familar with Clif high's webbot predictions? I've heard him forecasting $600 silver in early 2018. Don't know what to make of that, but he seems to have made a few accurate predictions in the past. I also heard him mention a Hollywood sex/pedo scandal in November, so ...

Anyway, if silver were to go to $600/oz there would have to be some big, unsettling events happening on the world stage over the next couple of months. Maybe the upcoming #Nov4Itbegins protests will prove to be a catalyst for something much bigger and uglier, who knows? Anyway, just thought I'd put it out there.
Cheers

Hey @atnicholson yes I've listened to Clif's interviews on a number of occasions; primarily on Greg Hunter's USA Watchdog. Itry to vary the sources that I get info from to combat the biases I know I have... we all have.

I'm not so much a fan of the cycle approach, especially those based on scripture. There are those too like Harry Dent who claim the opposite. I like the sound fundamentals but definitely I'm all for a wide range of commentators. It is interesing as you say.

Interesting too is the pedophile reveal you talk about with Kevin Spacey recently!

That November 4 stuff is a concern. It's been discussed here on steemit as a motivation for upping prepping activities and Alex Jones seems all over it. It's tomorrow actually!

Very salient points you raise and a great contribution to the post. Thank you!

Security in transportation once leaving the dealer was of concern to me and hauling a 14.2kg US Mint designated box didn't seem to be the most discrete option

That does seem something that would be important and I burst out laughing at the "didn't seem to be the most discrete option" part, yeh definitely not when it's almost glow in the dark green XD

For many it will be cost prohibitive initially..
I've registered for ini

just above the video, something seems to have gotten truncated?

Ah thanks so much for the formatting find @ryivhnn. I can't recall what I was trying to say there!

Yes the visuals of hauling a box of metal with discretion is comical, picture trench coats or maybe a baby pram with blankets covering the box. Hey, now that's an idea! Just taking the bub to the bullion dealer!

Thanks for the fun reply! img credz: pixabay.com
Nice, you got a 59.0% @trafalgar upgoat, thanks to @nolnocluap
Want a boost? Minnowbooster's got your back!

The @OriginalWorks bot has determined this post by @nolnocluap to be original material and upvoted(1.5%) it!

I got that from your show 😎