@nolnocluap's Portfolio Update #3: Bitcoin, The Talk Of The Town - Aside From SteemFest2 That Is... APPICS SMT, Steepshot & The Big Things To Come In 2018! 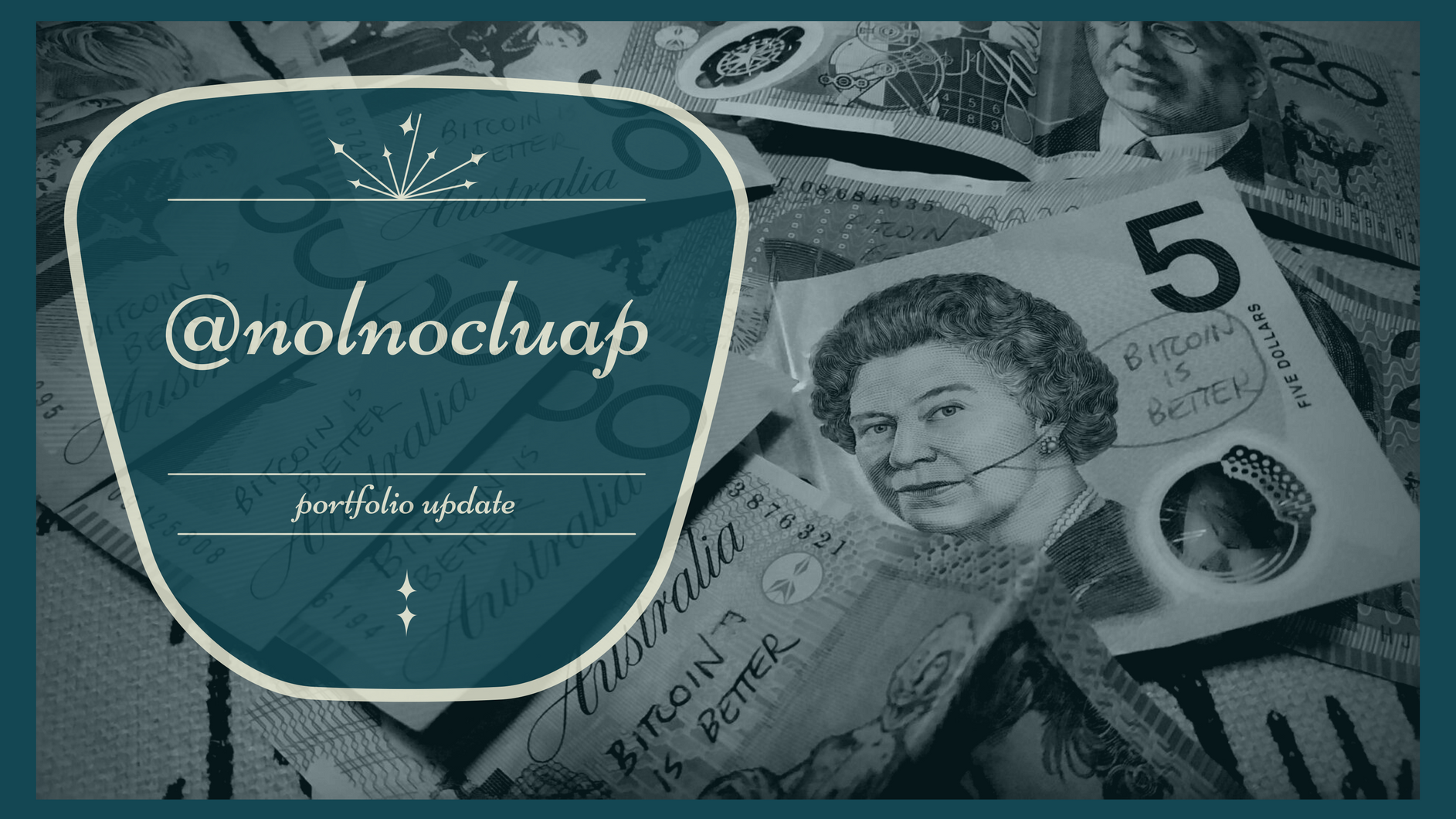 It's been hard to escape the unbelievable price action in Bitcoin in the last day. As I was heading to bed last night, I decided to place an at value bid a few hundred under the price at the time hoping to catch a pullback overnight. At the time I'd decided on AUD 8,200 as a nice round figure.

It turned out that the virus I'm currently suffering from had me up all night with coughing & carrying on so I ended up spending more time on the phone that I ever have during the night. Lucky thing as I saw no sign of any meaningful pullback during the night. At about 1pm I decided to retract my bid and make an at-market buy at AUD 8,888. This morning the price had cracked AUD 9,000 and has wildly fluctuated over 9 grand throughout today. I've see it get close enough to 10K today for me to almost expect it to hit that overnight here in Australia. Exciting times.

Some context around this comes from Bloomberg discussing the announcement from the world’s biggest futures exchange, CME Group, regarding the launch of a Bitcoin contract by the end of the year.

“The move offers the world’s largest cryptocurrency an important official recognition, and a chance to go mainstream. With the launch of futures contracts, more institutional investors will be able to invest in bitcoin, having been previously prevented from doing so for regulatory reasons.

Liquidity in bitcoin trading is also expected to increase with the move and creation of bitcoin futures should make it easier to create an exchange-traded fund based on the digital asset.”

My feel is that we're yet to really see what impact this will have. These are unchartered waters and I'm not convinced that historical precedent will be applicable in this brave new world. What's more, there's now an established coin-chasing trend off the back of the successful Bitcoin Cash hard-fork and the less so Bitcoin Gold.

The allure of free coins is strong and as I've previously written about in my inaugural portfolio update, I've already successfully liquidated some of my BCH for BTC so it's a real thing. The upcoming SegWit2x will be the third in this chain of recent splits - pardon the pun - and hence there's been talk of a sell-off immediately after that event in BTC.

If anything however, the Kleenex of cryptos has proven incredibly resilient to this trading pattern to date, so we still may be looking at a HODL situation with a strong end to the year. That's my current approach (but subject to change!)

This article explains this scenario a little more.

There is potentially added market demand on the back of another hard fork scheduled for 16 November. The so called SegWit2x software update, aiming to make Bitcoin faster to use, could see Bitcoin split in two again creating a new currency and another gift to existing Bitcoin holders as was the case with Bitcoin Cash and last week’s Bitcoin Gold. The splits see a one for one issue to Bitcoin holders (essentially a dividend) and whilst on both previous occasions investors thought Bitcoin would correct after the split, it barely caused a blip and Bitcoin continued to trade higher afterwards.

In a side note, it's been an entertaining evening watching SteemFest room 1 tonight live at

Well, I'd better end this post here as I need sleep to recover from this damn virus. Burning eyes and a laptop screen don't mix. Thanks everyone! img credz: pixabay.com
Nice, you got a 13.0% @peaceandlove upgoat, thanks to @nolnocluap
Want a boost? Minnowbooster's got your back!

The @OriginalWorks bot has determined this post by @nolnocluap to be original material and upvoted(2%) it!

Bitcoin did break above $10,000 AUD on coinspot.com.au momentarily.

wow yeah I'm not surprised @croat. It got close on btcmarkets.net. May hold above it overnight. Have to wait and see!

Love the "Bitcoin is better" from the queen. I want to invest all of my SBD into some currency for trading. Can you give me an advice which currency to invest in? It will be something like $100. As far as I know, investing such a small amount in bitcoin will not do me any good, so I am thinking about Neo for example, as it is still low and has potential. Any thoughts?
The live video from the steemfest does not have any sound though :(

If bitcoin goes to $1 million, it will be better than most altcoins. Bitcoin so far has been the best.

Hey @gabchik, yes, you have to trust the word of the world's biggest land owner! That's an initiative that's been floating around Steemit that we hope gains traction; a way of introducing the term to current fiat currency users.

The live video sound seems to cut out in between presentations and during lunch break. The part I've watched has always come good sound wise when the presenters start to speak, unless that's gone down since I've been watching.

Wow, that's a big question regarding where to start with investing in crypto. I'd hate to mention any one and do you wrong. I can say that quite a few are in a trading range at the moment and not doing much. Ethereum is one example. @scaredycatguide has been covering this on his weekly mspwaves "Music & Money Show". He does a crypto rundown each week which is really useful. Perhaps that would be ea good place to start to get a broad reference to start making decisions? Sorry I couldn't be more specific at the moment, I wish I had the answers for you but it's a question we are all facing at the moment! I would recommend diversifying however which you can do even with smaller investments.

Exciting times in the crypto world. I love getting "dividends" in the form of free coins every now and then. Sold all my BCH right away. Haven't decided yet if I'll hold SegWit2x or not. And Bitcoin Gold is even trading right away in an IOU form on the TradeQwik exchange. Fun time to be alive!

Hope you're feeling better soon. Definitely take a break from staring at crypto charts and dream about them instead while you sleep!

Dreaming of what the price action will be when I wake up, for sure @cryptomancer. Yes these are exciting times. Watching SteemFest 2 live made me feel like I had to take notes. The more I watched the more I realized I didn't know. Thanks for the comment!

Congratulations! This post has been upvoted from the communal account, @minnowsupport, by nolnocluap from the Minnow Support Project. It's a witness project run by aggroed, ausbitbank, teamsteem, theprophet0, someguy123, neoxian, followbtcnews/crimsonclad, and netuoso. The goal is to help Steemit grow by supporting Minnows and creating a social network. Please find us in the Peace, Abundance, and Liberty Network (PALnet) Discord Channel. It's a completely public and open space to all members of the Steemit community who voluntarily choose to be there.

This post has received a 0.17 % upvote from @drotto thanks to: @banjo.

Get better buddy. I'm holding BTC and selling off just a little to move into Litecoin and Ethereum while they are downtrending. When this bull run is over and the correction comes I anticipate the alts to recover so trying to buy some "on sale".

STEEM is cheap AF right now. Thinking about getting some as well. I thought it would have recovered some with the new layout and steemfest buzz but it still seems to hang lower. Gonna ponder it today and if its still low will scoop some up tonight.

I suggest some good whiskey to burn that virus out. Trust me, my wifes a nurse. @nursejamie

Burn it! Yes mate a great idea! I like the principal of sell high buy low. It's the premise behind Mike Maloney' wealth cycles. Probably not a bad move to shift a little and in the process take some profits off the table.

I feel the same about steem. Thought it got a little kick last night possibly with steemfest but haven't checked it this morning. I've been buying a little but given the price action is been nothing super duper. I'd like to invest more in the platform but not at the strong risk of capital loss. It's a waiting game for me now. Good luck with your alts!