What’s the best day of the week to buy or sell Bitcoin?

I have heard many Youtubers say that the price of Bitcoin tends to fall on weekends. Thus, if you are a buyer, you’d be better off by making your purchases on weekends. In this post, I show that while this may be true -on average- for Sundays, you may also end up paying a higher price than on any other days of the week.

To find the days of the week with the cheapest Bitcoin prices, I have used Coinmarketcap.com price data from April 2013 until February 2018. As is well known, Bitcoin prices have tremendously fluctuated during this period. Therefore, directly calculating the average price per day of the week would put in the same basket periods in which Bitcoin was $150, with periods in which it was $20,000. Thus, results would likely be distorted and would have little significance. 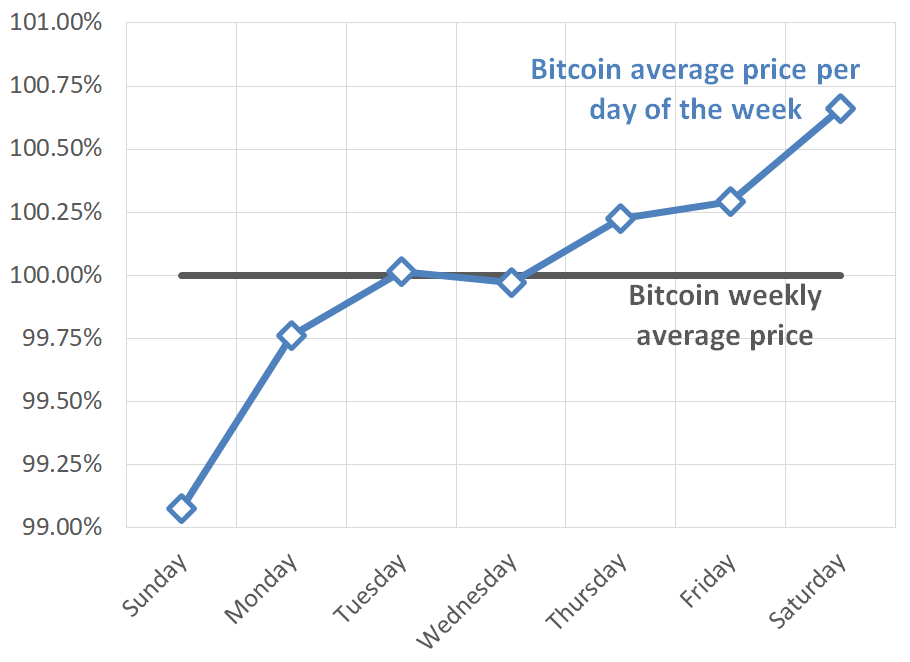 This chart indicates that Bitcoin prices tend to increase over the week. For example, on Sundays, the price of Bitcoin has been, on average, almost 1% below the weekly price, while on Saturdays it has been almost 0.75% higher than the weekly price.

These data seems to support the claim that Bitcoin prices tend to fall on weekends. Well, at least, on average terms this has been indeed the case for Sundays. Saturdays, on the other hand, tend to have the highest prices.

Does this mean that you should buy Bitcoin on Sundays and sell it on Saturdays? The answer is NO for two reasons. First, this post is not financial advice, I am not a financial advisor, and I am just showing what I think are interesting facts. Second, the chart above shows average data over a 5 year period, but if we were to take a look at each specific week, we would see that the price on each day of the week could be way above or below the average shown above. To illustrate this, the following chart shows, in addition, the maximum and minimum prices that have been observed since 2013. So, while buying Bitcoin on a Sunday could save you, on average, 1% of the weekly price, there has been a week since 2013 in which the price of Bitcoin on Sunday was 30% higher than the average price on that week! Likewise, there has been a week in which the price on Saturday was almost 30% below the average weekly price, implying that you have been better off by selling on some other day of that same week.

Please, let me know what you think about this post. If you have any suggestions for future analyses, let me know as well. Have a great week!

I found this interesting, kept my attention pretty well, followed and upvoted! In stride with your article concept, I’m sure you are aware that bit coin price seems to dip at the beginning of each year historically—- I see your profile pic has one of my favorite optical illusions the necker cube

Thank you very much! Yeah, the necker "impossible" cube is also one of my favorites too.

I don't think a certain day can happen. Because it could shoot up or shoot down in price randomly.

Indeed! That is basically what I conclude.

Congratulations @jcletics! You have completed some achievement on Steemit and have been rewarded with new badge(s) :

This post has received gratitude of 1.71 % from @appreciator thanks to: @jcletics.