Why Wei Dai is Satoshi Nakamoto

Wei Dai was the author of b-money, which was cited by bitcoin white paper in the first place. Wei was also the second person contacted by Satoshi (at least claimed by Wei). Satoshi was referred to Wei by Adam Back then contacted Wei and cited his b-money paper. The story looks like this. However, every one focus on Nick Szabo and thought he must be Satoshi. Every one simply ignores Wei, although he was known to be an expert C++ developer for Windows and has found several security holes.

Words difference between Wei and Satoshi is astonishingly small

There is another analysis by Scott Roberts. Wei has lowest words difference with Satoshi, although Wei's comments on lesswrong are mainly about philosophy. "Either I have a 'forum' and '1st person speaker' bias, or it's definitely Wei Dai. Dai was kind enough to make all 2 MB of text from his comments at the less wrong web site. People talk about how much Satoshi typed, 80k words. 2MB is about 300k words."

Wei is an expert C++ developer for Windows; Bitcoin was released initially for Windows

Here is screenshot of Bitvise.com, a software company selling an SSH server for Windows. Wei Dai was the co-founder of this company, though he wasn't involved in any development of the Bitvise SSH server anymore. Similar to Bitcoin, he transferred the SSH server to others. I guess they didn't even meet Wei Dai ever. The other cofounder lives in Texas while Wei lives in Seattle.

The SSH server is for Windows. So, Wei must be an expert of C++ development for Windows. He worked at Microsoft for several years. Coincidentally and surprisingly, the first version of Bitcoin was released as .exe file for Windows. This is pretty uncommon for an open-source project as they typically are released for Linux platform first 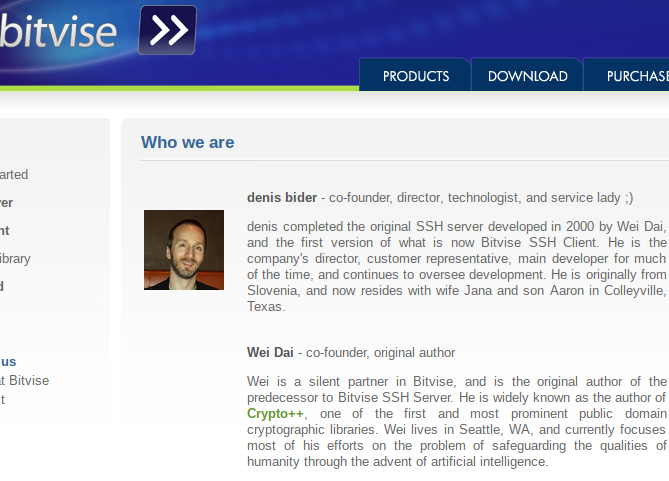 Here is a screenshot of bitcoin.org in March 2009. We can see the alpha version of Bitcoin was released as exe file for Windows. Wei is known to be good at finding security holes

They also talked about how it was amazing Satoshi already knew where all the security holes would be, and Adam Back, the inventor of hashcash (which is basically what Wei Dai's b-money and bitcoin are based on) cited Wei Dai as having demonstrated an interesting attack. Satoshi was not a newcomer to digital money to know about the potential holes: he'd already seen it hashcash and b-money and even publish a white paper on it .

"Wei Dai published an attack on the Freedom system, as described in the April white paper, “The Freedom Network Architecture.” This attack was based on the nature of the traffic shaping system implemented in the prototype system at the time. Since traffic shaping is not enabled in the current version of the protocol, attacks on the previously planned mechanisms are not currently applicable. Dai’s attack will be considered as part of our research into traffic analysis, and subsequent protocol revisions."

Dai must have made it all up. He faked the british spellings. He faked the Satoshi emails he supposedly received. He faked the claim that he started mining early because someone told him about bitcoin. How else could he cash any coins without having a public excuse? A reporter was confused about how he could be so sure his friend Szabo was not Satoshi. And then later he had to backtrack and admit Szabo actually could do some C++.
--Scott Roberts

hey so nice I really like your post! Thanks for it! I actually wrote my 2nd part of my introduceyouself and I write about that I went to jail because of cryptos... lets make steemit together to a better place with our content! I would like to read a bit more about you and maybe do you have some more pictures? Maybe you upvote me and follow me swell as I do? https://steemit.com/counterfeit/@mykarma/2-jail-review-counterfeit-euro-speeeeending-time