There is power in myth. It can be used to form a nation, to back up it’s claim for wider borders, to veil its abusive behaviour and to transform violence into glory and heroism.
This is my contribution to the weekly #artexplosion competition with the theme “Power”. 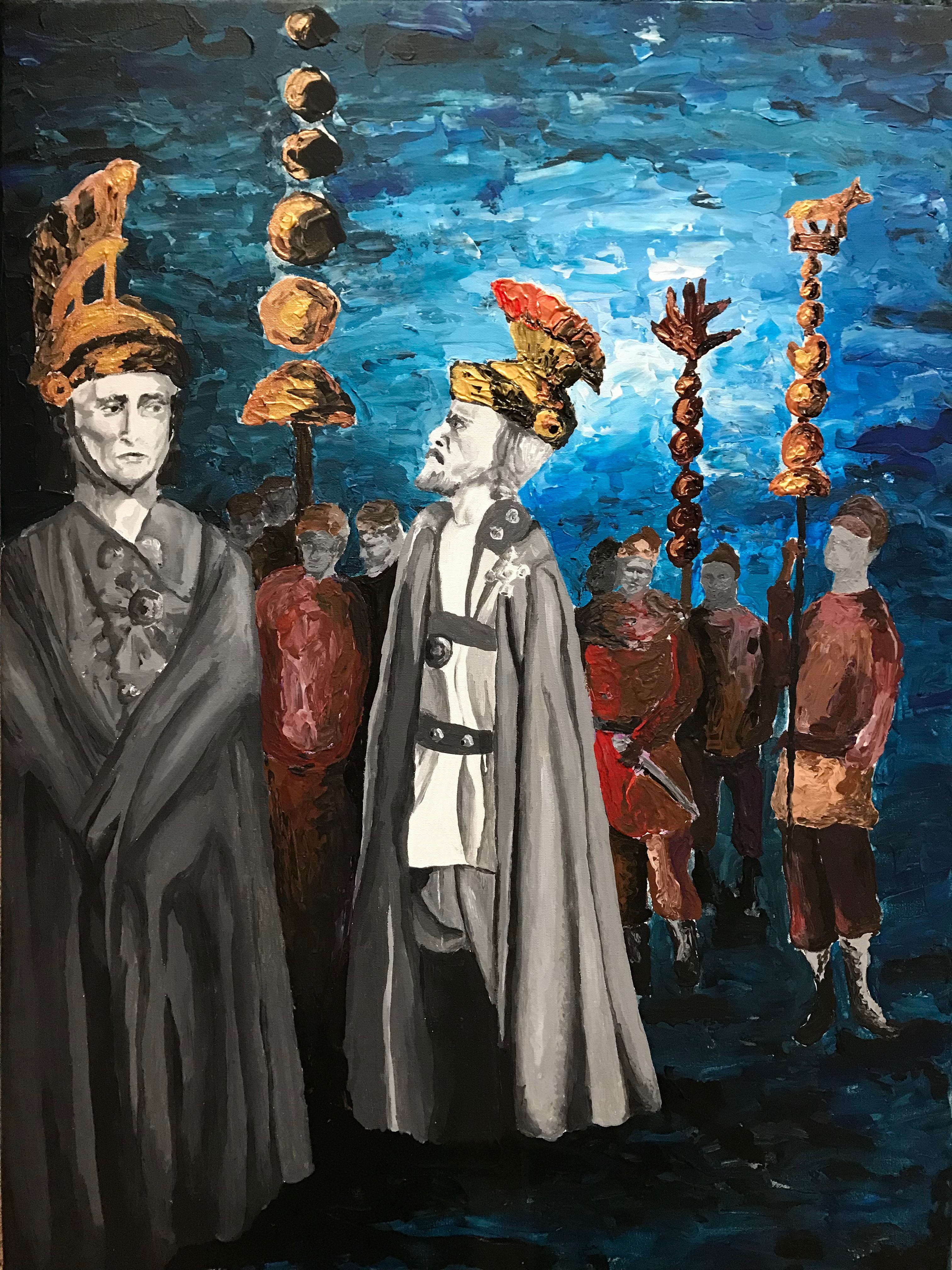 Some weeks ago, I visited the Teutoburger Wald, a region which is famous for two often abused monuments. Firstly, the Externsteine – strangely formed rocks which are believed to be a place of magic and energy since prehistoric times, a little bit like the much better-known Stonehenge - and the Hermanns monument, a man-made sculpture of more than 50 m height, build between 1838-1875. Both are exploited by German nationalism and today they are slightly dubious tourist (and Neonazi) attractions. Nevertheless, both monuments are impressive as is the surrounding forest, which was believed to be the battleground of the famous Varusschlacht (Varian disaster) and so the myth behind the Hermanns monument. For me the cult of personality which was formed around the figure of Hermann was astonishing and led me to the above shown painting. But first the story of Hermann who in fact wasn’t named Hermann. Throughout the post I will present you photos of my painting process. 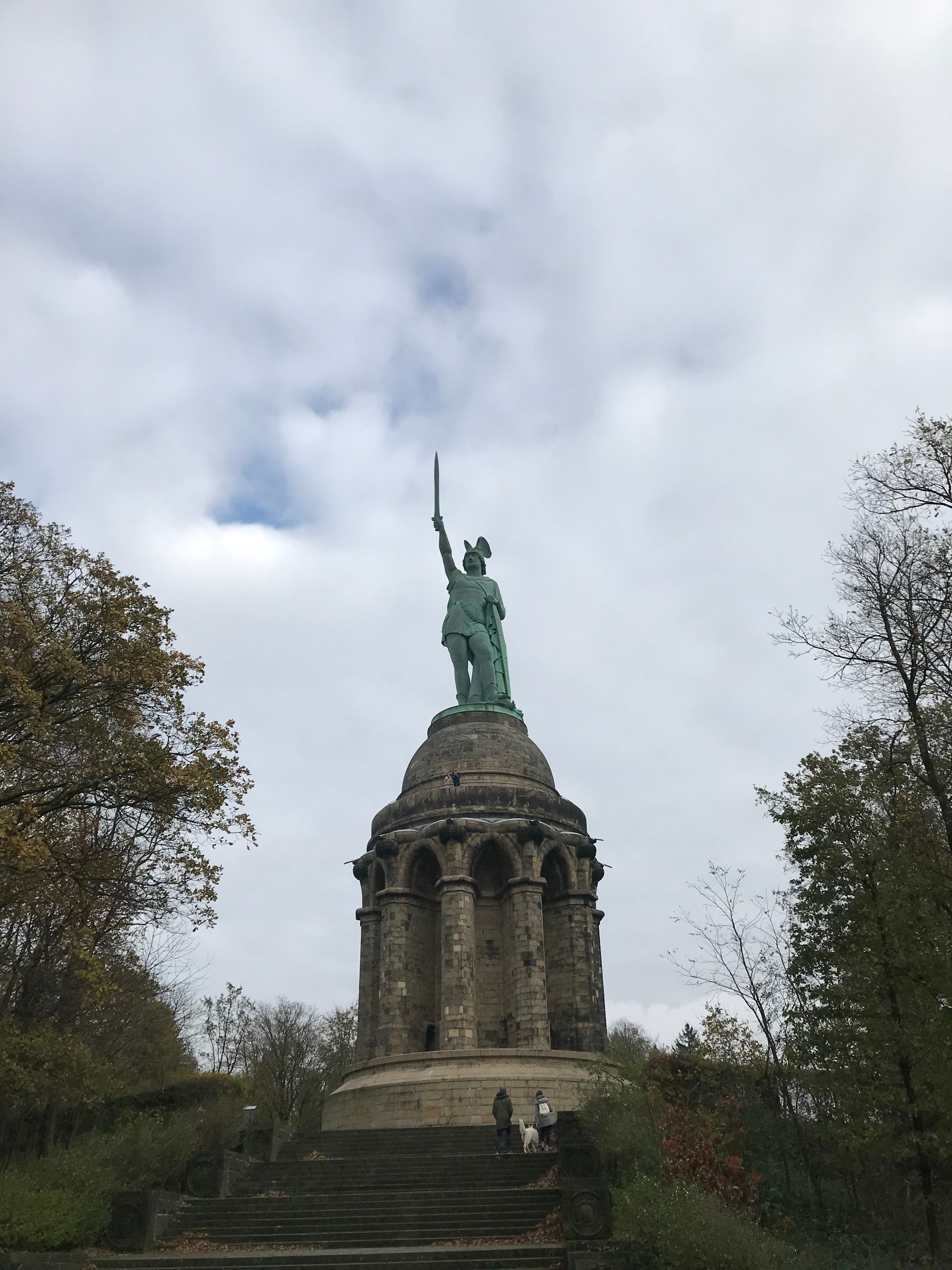 The Varian disaster refers to a famous battle which took place during the year 9 CE. The region of the Cheruscans was under the command of governor Varus. It was the farthest reach of the Roman imperium into the Germanic territorial. Varus is described later as a ruthless and greedy leader who aroused through his hard authority the resistance of the Germanic tribes. But this may be a topos of the Varus-critical historians like Tacitus and others who stylised him into a cruel anti-hero. Varus was in command of 3 legions, 3 cavalry units and 6 cohorts which consist of roughly 20.000 armed forces, accompanied by thousands of horses and pack animals, but this was only a small part of the Roman presence in Germania. The main forces were send away to fight at the Balkan region. Many of his soldiers were auxiliary troops which consisted of Germanic mercenaries. Varus antagonist was Arminius whose name was later germanised into Hermann. He was a leader of a part of the Germanic auxiliary troops and so had access to Varus. He used the absence of a great part of the roman army and conspired against the roman governor. He told Varus of a (in reality non existent) rebellion in northern Germania. Varus believed him and marched into a trap and was completely defeated. The Roman historians describe vividly the for them alien northern landscape with deep forest, swamps, and moss. They speculated, that the roman soldiers were not equipped for this kind of territorial and definitely not for fighting a guerrilla battle inside these forests.

After loosing this battle Varus killed himself and the progression of the Romans into Germania was finally stopped. 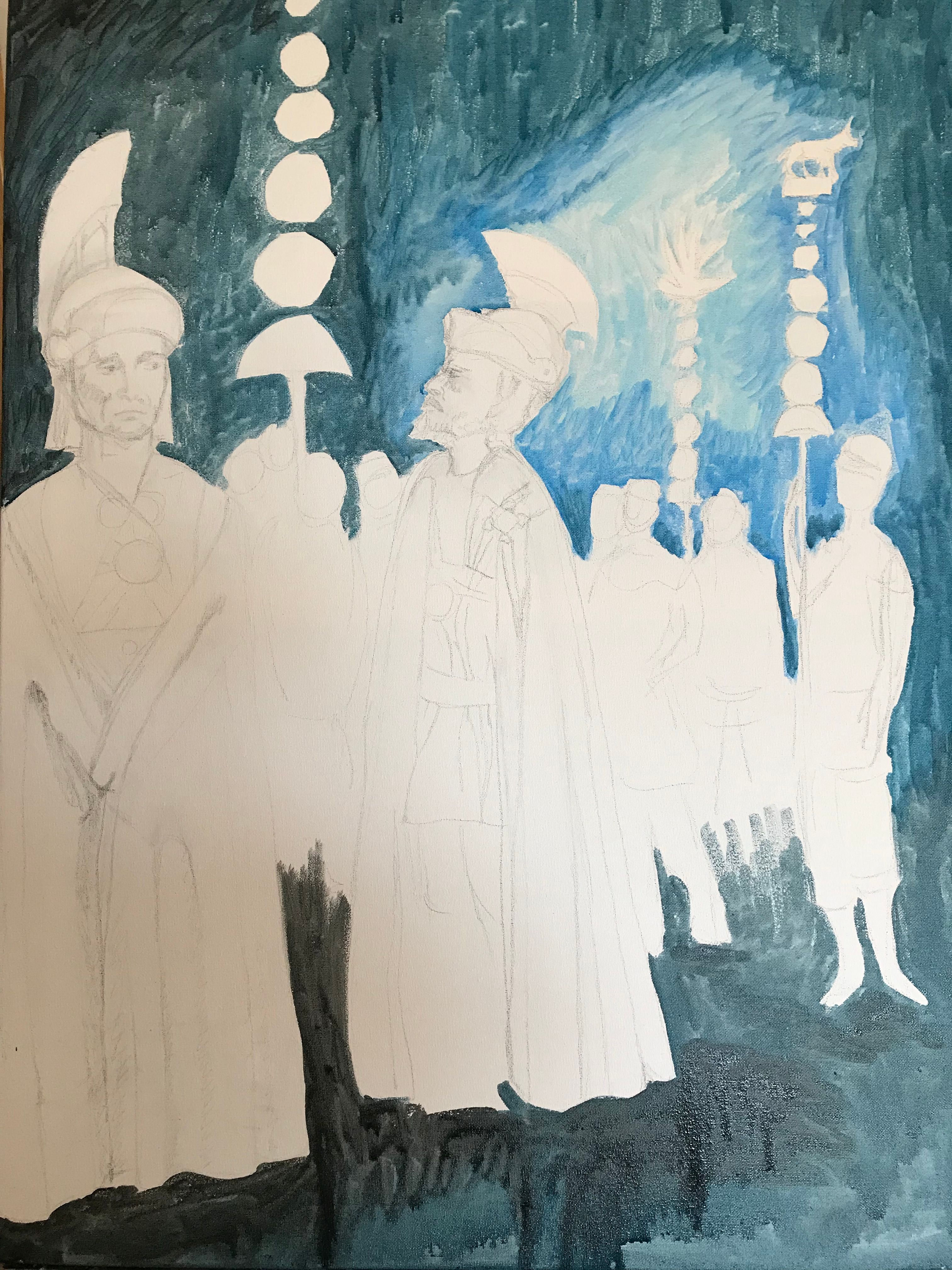 Unknown Arminus and non-existent Hermann
Arminius youth and his family ties are not well known, nevertheless tales about his growing up in Rome and about his family members are mostly presented as facts today. Perhaps the missing facts about the person Arminius even helped to transform him into a (mythical) hero. Arminius was the son of a Cheruscan leader, his mother is unknown. Arminius was allegedly send at a young age as a hostage to Rome where he was raised by a Roman family and named “Arminius”. But not only is Arminius upbringing unknown, his name also holds unsolved questions. The historians disagree as to whether the name Arminius refers to an Etruscan dynasty or may be a cognomen which he gained because of a function as a military leader in Armenia. His naming as “Herman” is often justified by the claim of it being the translation of the Roman name into Germanic, but this is not true. Hermann derives from Germanic “Charioman” which means army leader. His renaming into Hermann happened around 1530 in the cultural environment of Martin Luther. From there on Arminius/Herman was modelled into a figurehead of the German nationalism.

On the painting you can see a remote Varus surrounded by his troops and an angry Arminius who just in this moment decides to betray Varus. This is symbolised by the soldier directly behind Arminius who holds the gladius to literally stab Varus in the back. I have chosen to present the whole scene like a theatre play of the 1920 because for me this refelcts the artificialness of the whole Arminius tale: All is staged, invented and inflated. Both Varus – as the naïve but cruel leader – and Arminius – as the betraying but glorified hero – are without colour, they are only generic portrayals. They are the vessels to be filled with crude ideas of nation and pride.

Excellent painting! It should be mentioned that he defeated Romans twice. In retaliation for Varus disaster, 80,000 Romans were sent to destroy Arminius and his men. But, they were defeated as well. So, he was more then capeble militery lider.

Yes you are absolutel right, there is more to the whole story than what I have written. I was so focused on my own painting and its background story, that I simply stopped with the Varus disaster :-D

Of course dear it's beautiful because it's made by hand not using any machines.
Keep it up.

This painting is amazing but the background info and pics are epic!!

THaaaaaank you :-D I went there this november and was flashed by the Externsteine. This rocks are really impressive in nature. Also the Hermanns monument and the sorrounding forrest....I could not stop to take photos, so I thought this might be interessting topic for others too.

Yeah i enjoyed it and the painting! Thnx for sharing! Ill watch out. I just told my friend who studied art history to join.

Thank so much and I really appreciate the contest, it helped me to finish the painting very fast (because of the deadline)

Today I am out with migraines, but nevertheless I had a look at your profile. Are you a film maker??? THat is so awesome... many years ago I made some short animation films - I really love film (and music). Perhaps I should force my paintings to act and dance :-D

Yes I am a director and I would be releasing a full feature I did with co-creator @juliakponsford on January 8th. The first ever world premiere on Steemit from what I can tell. For the announcement post click here. I love music and dance as well let's mix medium it's all good there are no rules and if there some who care?

I just watched the trailer and now I am curious to see the whole thing!!! Love your aesthetics.

Very interesting and wonderful original historical painting has been drawn by @neumannsalva. it's being alive. The following story of the painting is clear description that tells the historical truth of that events. Story and it related illustration would be very helpful to children easily understanding. keep working up! If you are interesting in other side of art and painting, you are welcome to #hug-challenge and to get medical benefits from #air-clinic of @nairadaddy, followed and upvoted you. Thank you so much for your feedback. I never thought about the use of a painting for education. What a great idea. As I wrote in another comment, I firstly was not so satisfied with this painting. So it is doubly nice to get such a heartfelt comment. I directly looked up your links (and followed you), but I am not sure if I totaly understand the #hug-challenge But the concept (as far as I got it) sounds beautiful. I will explore it in the next days. Today i will will go to bed because I have ugly migraines.

Thank you dear for your valuable reply. Do you having treatment for migraines?

Not really... I have migraines since my teen years, but recently they are much more often (too often) I am a no responder to triptanes and normal pain medication only helps sometimes. I tried some preventive medication, but without success. And because I am a yoga teacher I firstly started with a whole bunch of alternative methods - also not helpful. Right now, I am tired of searching and trying various things and work on accepting the sh***. Who knows, perhaps it will decrease spontaneously.
But thank you for caring :-D

May you try the natural medicine. i too suffered from this pain at my teen age due to depression and anxiety. but now i am free. reply to the message. i am expecting.

Yes I started with natural medicine like butterbur, feverfew, magnesium, ginger, Q10, TCM etc... but sadly nothing brought an improvement

You show talent and creativity. I like that you left colour out of the two main characters. It creates interest and draws the observer into the painting. I could not stop looking at it...and then I began noticing other details...the faces and the story behind it. Great work! :)

Thank you so much <3
Firstly I was not so satisfied with this painting. It belongs to a serial of paintings I started in the middle of this year. They all have emotianal and/or political charged topics and I tried to distance myself and the viewer by taking the color away.
I am very happy that you can relate with this technique.
Now i fall into bed, because I have sh**** migraines

Awesome interpretation of the theme, and thank you for showing some of the process!

Thank you for creating this opportunity :-D Without your contest I perhaps would have not finished the painting so fast!! Thank you

Thank you for the praise :-D

Thank you very much and happy you liked it.

Congratulations @neumannsalva! You have completed some achievement on Steemit and have been rewarded with new badge(s) :