While the word apocalypse is often defined as “the complete final destruction of the world, or an event involving destruction or damage on a catastrophic scale”, the etymology of the word “apocalypse” is the Greek “apokaluptein” (from apo- “un-” + kaluptein “to cover”) meaning to “uncover” or “reveal”. The apocalypse then, can be seen as a revealing of something that has been hidden. 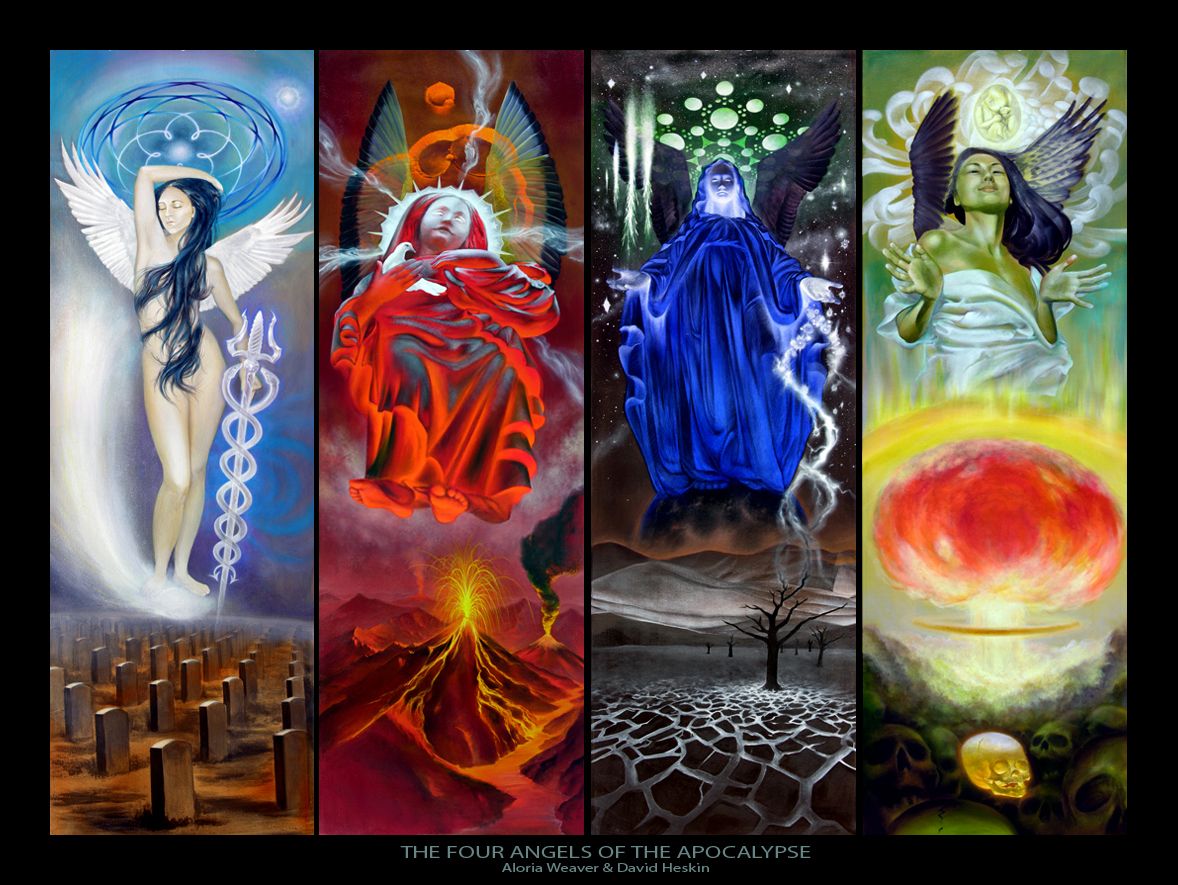 The Four Horsemen of the Apocalypse are described in the New Testament of the Bible called the Book of Revelation of Jesus Christ to Saint John the Evangelist. In God’s right hand is a book/scroll sealed with seven seals. Jesus opens the first four of the seven seals, which summons forth four beings that ride out on white, red, black, and pale (or green) horses. The four riders are commonly seen as symbolizing Conquest, War, Famine, and Death, respectively. The Christian apocalyptic vision is that the four horsemen are to set a divine apocalypse upon the world as harbingers of the Last Judgement.

Cultures around the world have prophesied the “end of time” and many have interpreted this as meaning the end of Earth. Fundamentalist religious groups await the destruction of the world, which will supposedly bring the return of a messiah or savior and the “chosen ones” will be saved or spared. While the figure is different according to each religion, the storyline remains essentially the same, and looking more deeply into the symbolism of these religions, we find one story told around the world. This singular story, told across all cultures and religions since the beginning, has a much deeper cosmological interpretation when seen through myth and archetype.

Our quest is to envision the concept of an apocalypse, not as the destruction or annihilation of the world, but as an awakening that will enable the creation of a liberated new world. While there is often chaos before creation, death before rebirth (the Italian Renaissance was preceded by rampant wars and plagues), it is in seeing the greater picture as a whole that these forces can be better understood. Catastrophic influences exist at every scale- from the microcosmic, to the macrocosmic planetary and galactic scales. Destructive urges within humanity exist to be reconciled as expressions of collective unconscious energy, understood as symbolic acts of recreating past events, in order that they may be healed and transformed. By focusing on the transcendent opposites of these archetypal forces, we call forth the inner light to cast its resplendent rays into the shadows and awaken the sleeper.

The end of a time does not signify the end of life, only the beginning of a new era yet to come. If one meditates upon the paradox and seeming contradictions held within these compositions, an illuminating beam of gnosis may emerge from the innermost self. This heightened awareness ceases to define existence through distinctions of polarity, but instead recognizes an interconnectedness and unity underlying all life. Layers of metaphorical meaning await our inquiry, for these four paintings tell numerous stories which overlay many interpretations (mythic, religious, scientific, astronomical, cosmological, etc.) as they offer many points of entry along the journey to Truth.

Click here to read more about the symbology of the paintings