The Beauty of Lock and Dam No. 1

The last few weeks I've used my Monday post to talk about traveling and photographing places I've been only once. Today I'm going to talk about something much closer to home, somewhere I've been very often.

Lock and Dam Number One, to the right of the photo above, is the northernmost of 29 lock-and-dam structures on the Upper Mississippi River managed by the United States Army Corps of Engineers to make large-vessel navigation possible on the river. It's also now the least-used, as most ports upstream have been closed in the effort to prevent invasive carp species from reaching farther up the river. 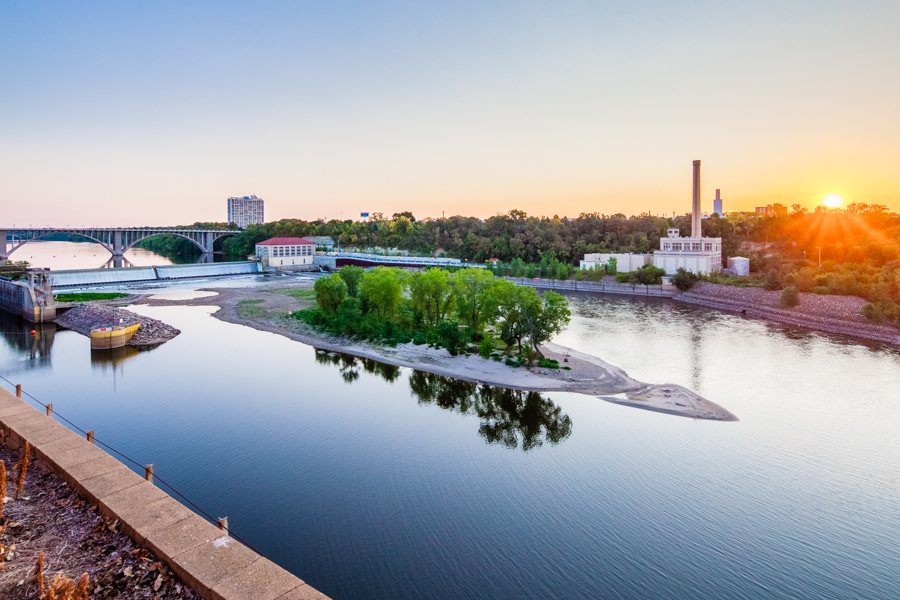 The original structure was built in 1917, with a second lock added in 1932. A boat entering the lock from the downstream end will be raised 30 feet (9.14m) in order to exit on the upstream end. Downstream is now the most likely source for traffic, as the main operation of the lock is for tour boats coming up from ports in St. Paul to sail up to Minneapolis and back. 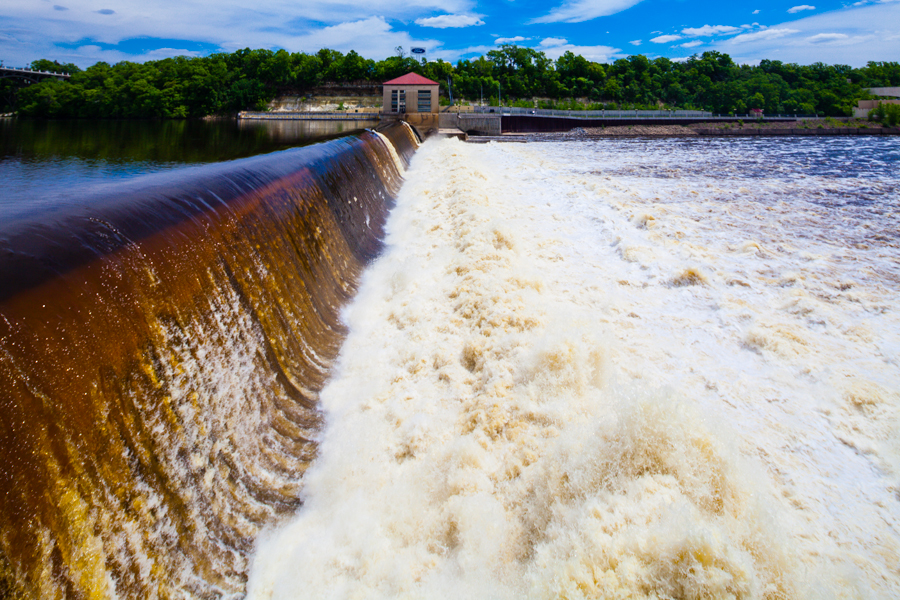 The dam and hydroelectric plant was originally owned by the Ford Motor Company, and used exclusively to power a factory on the bluffs on the east side of the river. You can still see the Ford sign above the hydro plant in some of my photos, but photos are the only place it still exists. The plant was closed in 2011 and has since been demolished to make way for new development, the character of which is still being hotly debated. For me it's a peaceful place to interact with the river in what's still an urban setting but an almost-empty one. Though there's room to hold a rather large wedding inside the facility I don't think they do that; I've never seen more than five other people there, other than the Corps employees, and people rarely stay long. Yet it's a good place to watch the river, and the waterfowl, and occasionally even see a boat go through the lock.

Of course the only boat I actually have a picture of going through this lock is a tiny canoe. If I want to photograph boat traffic I have to head downstream to more-active locks like No. 5 in Winona, about a two-hour drive. This one's an easy ten-minute trip from my house. 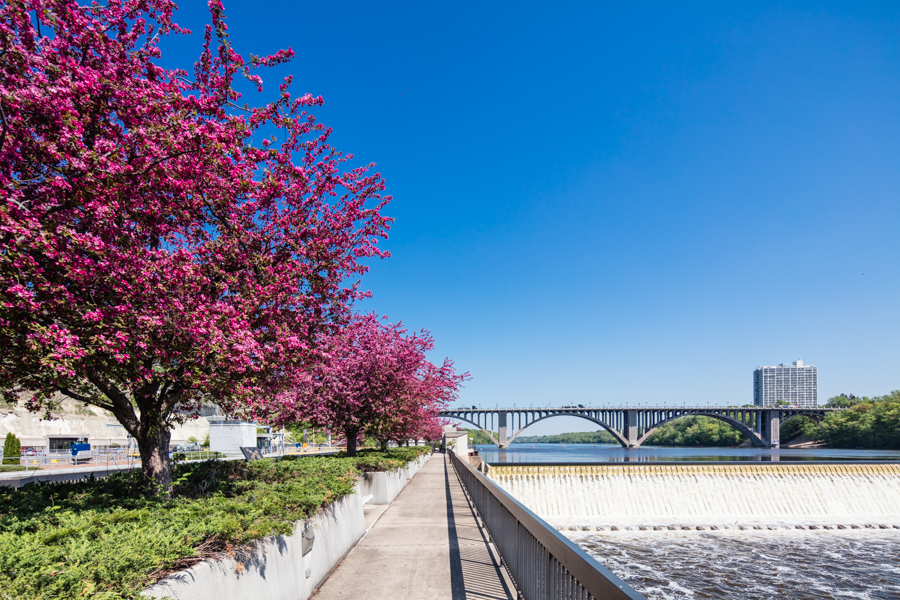 This year I finally got there when the fruit trees were blooming. I've always wanted to but they last about three days here, and I've always had something else going on. I feel like I've now filled my card of warm seasons. I've been there when the water was high in the spring, as you see in many of these photos. I've been there in the fall when there was no flow over the dam at all.

Unfortunately I still haven't figured out a good way to photograph it in the winter. The facility is closed from November to April. It's also only open during the day; the sunrise photos above are from locations outside of the lock & dam proper. (The high point of view is from the Minnesota Veterans Home, not somewhere I want to be sneaking about in the middle of the night.) I've tried photographing from the bridge without much success. Some year maybe we'll get a hard enough freeze that I can walk upriver from Minnehaha Falls.

This has been an entry in the 1001 Places to Remember project by @archisteem in collaboration with Architecture and City by @photocircle. Some of the information here was gathered from the National Park Service and Wikipedia Photos are original.

I enjoyed this article, never knew that ford owned a dam... But it makes sense. Thanks for being informative and well articulated! The pictures are also very nice.

I wonder if anyone has done a catalog of all of the secondary infrastructural things built by the midcentury megacorporations. That could be really interesting.

@tcpolymath just browsing on Steemit and found your post. Wow the photos are amazing and like the The Corps of Engineers park photo along with dam and hydroelectric plant. Did not know it was owned by Ford Motors previously. Cool history and knowledge, great content. Upvote to support. I also enjoy taking photography of all sorts, would be awesome to hear your feedback about mine as well, for my own learning experience~

Wow the photos are amazing, I can't believe the sky on the last one!

One nice thing about living in the upper midwest is that we have amazing sunsets. So much so that we can get skies like that looking in the wrong direction - that's basically southeast.

Really cool! This reminds me of visiting Hoover dam in Nevada, have you been there?

I haven't. It's on my list for when I manage to get out to Death Valley, which has been one of my almost-winter-plans for several years now.

The only really big dam I've been to is Niagara.

Highly recommended. There is a lot of history behind the Dam. No power tools used to build it which is what's fascinating about it.

Such a beautiful public space that has so much potential to be repurposed.

This looks like the perfect location for a guinguette.

There is another lock upstream, right in downtown, that had to be closed completely for the carp and we're talking about how to turn it into a public park of some sort.

I had to look up what a guinguette was, that's an interesting idea.

Lovely photos! Looks like a very nice green place and in this season we see flowers blooming in all beautiful colors.
Keep up the good work :)

Well, we had flowers five days ago. The trees are pretty sure it's full summer now. The joys of living on 45 degrees north.

truly spectacular photos ... I am new to the community and now I follow you

Welcome. If I may offer a bit of beginner advice - we have a lot of spambots here who just look at the tags on a post and make generic comments on them. I looked at your other comments and can see that you're not doing that, but if you make sure to include something about the body of the post when you comment, you will be more successful both in getting comments rewarded and in engaging with other users.

Thanks for that fact, every day you learn something new! Thank you!

@kgakakillerg - You may not realize that "excellent post" is considered to be spam, you used 40 similar phrases in your last 100 comments, and the Steem Sincerity API shows a 56.00% spam score. Learn why this is spam and a few better ways to earn the support of the community when commenting.

@tcpolymath - You can remove this comment and everyone can whitelist me from appearing in future posts.

Is there a way to anti-whitelist so you still show up in my comments but don't mention me? I like the comment evaluation but could do without the mentioning.

I'm pretty excited to say, absolutely you can!

Seriously thanks for this awesome suggestion! And I had built much of this logic already so I was able to throw this together pretty quick.

I've tested this and was gonna just add you, but I wanted to see a little more real world testing so I hope you don't mind adding yourself.

Thank you for the submission for our project – 1001 Places to Remember. Let us go through the content and will make an announcement soon for the posts which will be winning the rewards as well as qualify for the publication.

Love all the great photos! <3 You may view the post where your photograph is featured through this link Photocircle Top 10 Contributors 38th edition: "Architecture & City"

This photo's look so alive . The sky look amazing .

Wonderful article and pictures. The Lock and dam are pretty awesome. Thank you.